There's a movie called FDR: American Badass. It stars Barry Bostwick (remember that name) as Franklin Roosevelt, who contracts polio from a werewolf bite, then has to go to war (personally) to fight the werewolves running the Axis countries. I had planned on writing a review of it--and I probably still will--but while I was gathering my thoughts, I realized I had another, more important story to tell. It's tangentially related to FDR: American Badass, but mostly it's a strange and somewhat embarrassing story from my childhood, encompassing celebrity crushes, questionable parenting, and two other presidents.

Let me set the scene: The year was 1984. Michael Jackson's hair caught on fire. O. J. Simpson starred in a Hertz commercial. Who you gonna call? Ghostbusters, of course. A more elusive question: Where's the beef?

In the spring of 1984 I was six years old, and even back then I loved presidents and American history. Therefore I was overwhelmingly excited when my parents let me stay up late to watch all three nights of a miniseries about George Washington. My parents probably thought, "How cool is our kid? The highlight of her life is that she gets to watch a show about our first president!" They probably felt very smug.

That feeling likely didn't last long, because that miniseries caused me to fall in love, not with George Washington but with the actor who played him: Barry Bostwick. "How weird is our kid?" my parents probably wondered. "Why can't she have a crush on Michael Jackson like everyone else?"

At the time, Barry Bostwick was nearly 40 years old (though he looked younger) and therefore not what one would generally consider a typical teen heartthrob, but something about his portrayal of a young Washington--tall, slender, pony tail flying out behind him as he galloped on his horse--really did it for me.

I suspect I must have talked about Barry Bostwick a lot over the next few days, because I remember my dad growing a little exasperated. One afternoon he and I were running errands and he needed to make a quick stop somewhere. He left me in the car--as parents were known to do back then--but before he shut the door he tossed me a section of the Akron Beacon Journal. "There," he said. "That's what Barry Bostwick really looks like."

I looked down in horror at the photo on the page. Instead of the tall, trim, dashing man from the miniseries, I found a paunchy, ugly, shirtless old man in swimming trunks, walking along a beach. I stared and stared in disbelief. What had happened to Barry Bostwick? How could he have let himself go like that? And so quickly!

My 6-year-old self either couldn't read the caption or didn't know to look for one. My 6-year-old self thought the guy in the photo looked a lot like then-president Ronald Reagan, but my 6-year-old self also knew my dad wouldn't lie to me. I resigned myself to the fact that Barry Bostwick was not as appealing as I had thought.

Heartbroken over truth about my love, I gave up on Barry. I don't think I ever spoke of him again.

In retrospect, I don't know what my dad was thinking. Maybe he was joking with me. Maybe he was being metaphorical--not trying to imply that the photo actually was Barry Bostwick, but that, at least compared to a 6-year-old, he was indeed an old man. Maybe he was employing an untested but apparently effective parenting strategy to help disabuse young children of unattainable childhood crushes.  In any case, I can almost guarantee my father will have no recollection of this even happening, but I'm positive it did.

Out of curiosity and to make this post more complete, I tried to find photos of Ronald Reagan on a beach. (If you ever want to feel really disgusting about yourself, google: Ronald Reagan shirtless beach.) I found some photos--and they looked like the one I remember from that fateful day when my father slammed the door on Barry Bostwick--but I couldn't be sure because I couldn't find dates on them. Then I looked up when the Washington miniseries ran (April 8, 1984) and googled: Ronald Reagan beach April 1984. 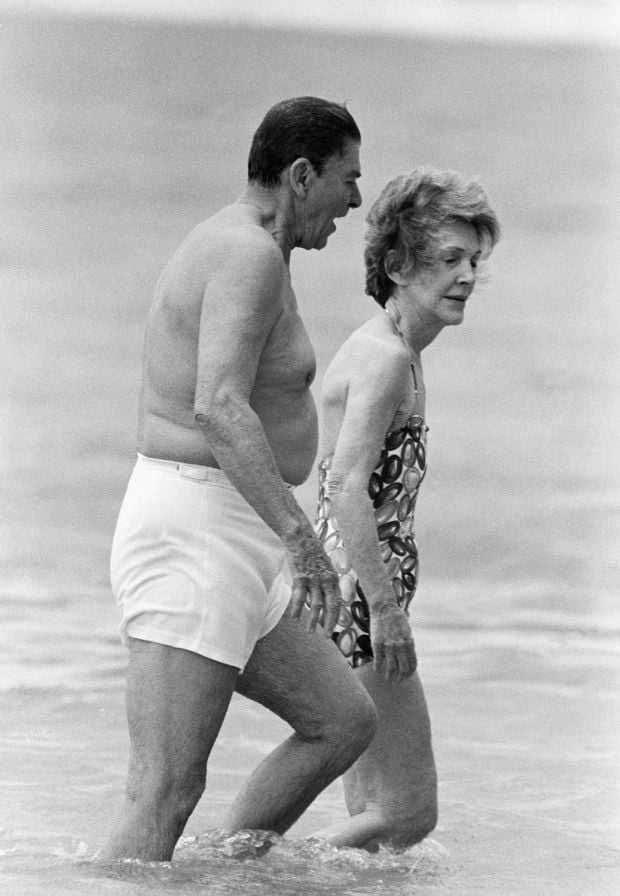 I don't remember Nancy being in the photo I saw, but maybe she was cropped out, or maybe my brain was too busy processing my disappointment to notice or care about Barry's older female companion.

Soon I moved on to my next celebrity crush: Boy George.

Posted by Jen Presidentress at 6:21 AM