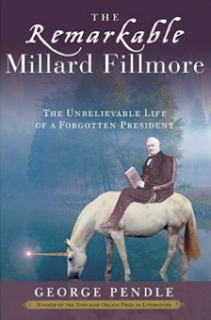 Millard Fillmore, despite having an awesome name, is not one of my favorite presidents. I'd say he's probably no one's favorite president. (I sort of hope to get a bunch of hate mail from Fillmore fans now.) If I had a biography of every president sitting in front of me and needed to put them into a reading queue, Fillmore's would likely be somewhere around #40. And yet I did read a biography on him recently. Kind of.

The Remarkable Millard Fillmore by George Pendle is a biography in the sense that it contains some accurate biographical information. It also contains a lot of information that isn't true, but makes Fillmore seem more interesting than he really was.

The premise of the book is hilarious. In the preface, the author explains how he was incessantly mocked at the Biographer's Club for wanting to write about such an unremarkable subject. But he was lucky enough to come across several handwritten notebooks that Fillmore had left, which had never before been seen by a scholar. The rest is history...ish.

It turns out Fillmore met an incredible number of famous people and inadvertently caused (or failed to notice) some of the most important events of his day, like when he triggered the Panic of 1837 while trying to escape an enraged Martin Van Buren. He also housed a young Edgar Allan Poe, who was present when Andrew Jackson challenged Fillmore to a duel. (It was also Fillmore who suggested Poe write a poem about a bird.) There are plenty of other fascinating people and adventures along the way, many of which are more important than the ones I've mentioned here, but I don't want to give away any spoilers. But most of them involve Fillmore acting as an unsuspecting halfwit.

The book does get a little dry in some places. I guess even satire can't make Millard Fillmore that interesting, but for the most part it's an entertaining read. (There are some especially amusing gems in the footnotes.) What makes the book work is that it's written so seriously. Unlike more slapstick and obvious parodies, this one is more nuanced. The Remarkable Millard Fillmore reads exactly like a scholarly biography that just happens to involve some completely implausible scenarios.

The end of the book does include notes detailing parts of Fillmore's story that really did happen. (Or, rather, events that can be corroborated by other sources, but don't necessarily preclude the additional events the author claims happened.)

The best part isn't even the book itself; it's the 1-star reviews on Amazon. So many people complain that they were expecting a serious work of nonfiction and instead were duped into buying a piece of satire. If it weren't for the cover photo--which shows Millard Fillmore sitting on a unicorn--their complaints would be valid. (I do have a review there, too, which is basically a shorter version of this post. I didn't plagiarize anyone but myself.)

Did this book inspire me to read an actual biography of Millard Fillmore? No, I'm good. But it did make me regret not having come up with the idea of writing a fake presidential biography.

Posted by Jen Presidentress at 8:24 AM