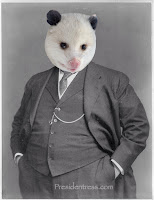 I love this story because it involves two of my favorite presidents: Theodore Roosevelt and William Howard Taft. It's also just a really great story.

(Before we begin, it should be noted that the animal we're actually talking about is an opossum. Possums are Australian. But for the purposes of this post, we'll call them "possums" because that's what they're known as, even if it's technically incorrect.)

You might know that the teddy bear got its name thanks to Theodore Roosevelt (who, by the way, disliked being called "Teddy"). There are various and conflicting stories about how the stuffed bear came to be popular. In some versions of the story, it's because Roosevelt took a bear's life, in others it's because he spared a bear's life, and in still others it's because he didn't encounter any bears at all. One of the stories originates in Mississippi; some in Colorado. The Mississippi story seems to be the most widely accepted and documented version. Basically, TR was out hunting and decided to spare a female bear's life. A cartoonist depicted the incident in a newspaper, and from that touching story and adorable drawing, the "teddy bear" was born. 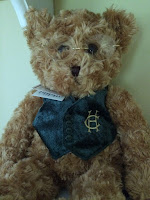 (Incidentally, I bought a Teddy Bear from a Colorado hotel that claims to be the site at which the teddy bear was really born, but considering the hotel itself has at least three different stories about how the bear came to be, I'm reluctantly inclined to believe the Mississippi version. At least I got a bear with a vest and wire-rimmed glasses from it.)

Anyway, suddenly teddy bears were all the rage, and 100 years later, they still are.

So what's the deal with the Billy Possum?

It seemed logical at the time: If children loved playing with an animal associated with President Roosevelt, surely they'd also love an animal associated with President Taft. Unfortunately, there were no touching stories about William Howard Taft sparing a bear's life, so promoters chose the next best thing: a meal of possum and sweet potatoes that Taft enjoyed while campaigning in the south.

Several companies tried to capitalize on what they assumed would be a flood of requests for Billy Possums, but despite their best efforts, the Billy Possum never took off.

1) Possums are scary, ugly creatures.
I'm not buying this explanation. Possums are actually adorable. Yes, they're horrid creatures and you wouldn't want one in your backyard, but the same can be said of bears.

2) Mechanical toys were becoming popular, so why would someone want a floppy possum?
Maybe true, but why not make a mechanical possum? (Also, "Floppy Possum" would make an amazing name for a band.)

3) The Billy Possum didn't have a heartwarming story attached to it.
This one is definitely true. Roosevelt sparing the life of a helpless bear is certainly a more endearing image than someone chowing down on possum. (As the podcast mentions, though, Roosevelt later had one of his fellow hunters kill the bear instead. And then they ate it. With a side of possum. For real!)

What the podcast touches on but doesn't emphasize enough, in my opinion, is that it really came down to the men themselves. Roosevelt was a larger-than-life being bursting with charisma. People idolized and admired him. Taft was kind of...a wallflower. (Even that isn't completely accurate, because Taft was supposedly quite personable and friendly, but he certainly didn't have Roosevelt's public persona.) If someone had made a possum to commemorate Roosevelt's eating of one, we'd probably still be cuddling with Teddy Possums today.
Posted by Jen Presidentress at 12:05 PM