The Cubs, Trump, and Armageddon 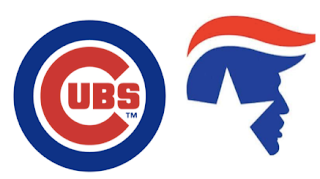 The Cubs have made it into the postseason a few times in recent years, and each time I've been reminded of a particular short story by W. P. Kinsella. For those of you who aren't fans of baseball literature, Kinsella is a Canadian writer known in the U.S. for his stories about baseball, and his plots often involve at least a slight supernatural element. (His best known work is a novel called Shoeless Joe, the basis for the movie Field of Dreams.)

The short story in question is called "The Last Pennant Before Armageddon" from the collection The Thrill of the Grass. The premise is that the Cubs are having an unbelievably good year, but their manager has been receiving messages from God in the form of recurring dreams in which various people (including Al Capone and longtime Chicago mayor Richard J. Daley) plead with God to let the Cubs win. God tells them that the Cubs will win the last pennant before armageddon. Finally, with the team on the verge of clinching the pennant, international tensions between the United States and USSR have reached a critical level, and the Cubs' starting pitcher is showing signs of fatigue. The manager needs to decide whether to leave his starter in, which might cause the Cubs to lose but would also keep the world from ending, or whether he should pull his starter and bring in his reliable closer, thus winning the pennant but leading to a nuclear war that would wipe out civilization. (I won't tell you what happens.)

As I write this, the Cubs have won their Division Series and are headed to the National League Championship Series against the Dodgers. (It should be noted that in Kinsella's story, the championship series is against...the Dodgers!)

Now, I'd love to see the Cubs in the World Series. I'm not exactly a Cubs fan, per se, but they've always been my favorite National League team. I spent good chunks of my childhood in Chicago and live in the Chicago 'burbs now. (It would be even better---though possibly more damning---if they face the Cleveland Indians, another perennial loser that hasn't won the World Series since 1948. I grew up an Indians fan in Northeast Ohio and have been waiting my whole life for them to finally win the whole thing. There's no doubt that a Cubs-Indians matchup would signal an apocalypse.)

Over the past few days, Donald Trump's campaign has taken a nosedive, so it seems less likely that he can win. Does that also mean the Cubs will lose? We'll have to wait and see.

Back in 2003, the Chicago Tribune ran an article about Kinsella's story. The Cubs were in the playoffs that year as were the Boston Red Sox, who hadn't won a World Series since 1918. In that article, Kinsella said that he wasn't rooting for either team to win because he likes them more as lovable losers. Neither team made it to the World Series that year. The Red Sox did wind up winning the World Series the following season and the world did not end, which is further proof that armageddon is dependent on the Cubs and not any other team. 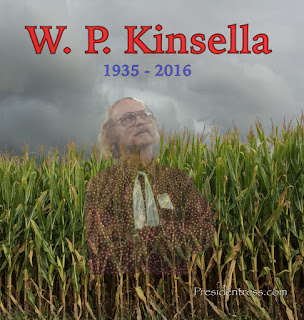 In that 2003 article, Kinsella was asked what would happen if the Cubs won. He said, "You never know. We'll just have to see." Sadly, Kinsella won't know how it turns out this year because he died last month, which seems like a classically Kinsella-esque twist to this whole scenario.

Am I being melodramatic and superstitious? Yes, absolutely, and hopefully that's all it is. But if the Cubs and Donald Trump both win, there's no way you'll convince me it was just a coincidence.
Posted by Jen Presidentress at 6:10 AM