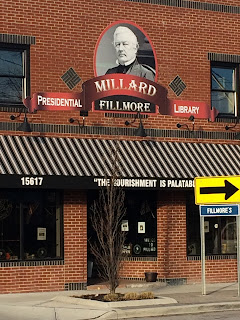 For a second I was very confused, and I could sense the host was, too. Ohio has birthed and housed lots of presidents, but Fillmore isn't one of them. Then Fillmore's alter ego explained, "It's a bar."

Well, the second I got home, I googled the place, and sure enough, there's a relatively new bar in Cleveland called the Millard Fillmore Presidential Library. Their awning says, "The nourishment is palatable," a nod to Fillmore's supposed last words. Their phone number ends in WHIG.

I was overwhelmed with excitement to learn this place existed, but also disappointed because I had just been in Cleveland a couple weeks before and could have gone.

Luckily, though, I found myself in Cleveland again this past week, and I was determined to make it to the Fillmore to check it out. 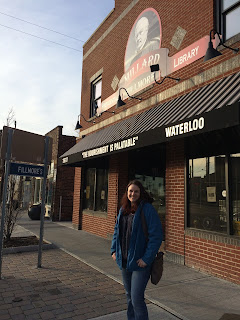 We snapped a few photos, then headed inside. The first thing I noticed was a giant photo of Millard Fillmore on one of the walls, so I had Becky take a picture of me with it. I initially did a thing where I tried to cup his face with my hands, but Becky thought it was too weird to photograph. 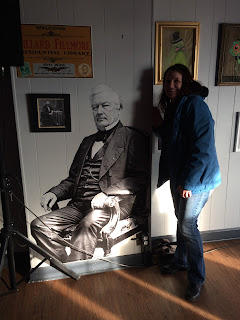 Then we headed over to the bar, and I asked the owner (whose name I never got) if he had any special Millard Fillmore-themed drinks. He said he did: The Fillmore Manhattan, which is a Manhattan with shots of Grand Marnier and Jagermeister.

I told him instead of a Manhattan, he should call it a Buffalo. 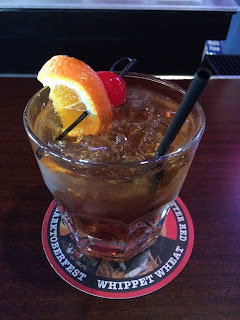 Anyway, Manhattans aren't my thing, but when in Rome (or Cleveland, or Buffalo) you get the Fillmore Manhattan. The first sip kind of threw me because it was strong but after that I really enjoyed it. It was more than palatable.

I'm not generally very gregarious around people I don't know, but I also have a very low tolerance for alcohol and hadn't eaten all day, so after a few sips I was chatting up the owner and probably scaring him a little.

I asked the obvious question: "Why Millard Fillmore?" He kind of shrugged as if to say, "Why not," said he thought it was a good choice since Fillmore was neither Democrat nor Republican. Fair enough.

I told him about this blog, and I also told him about the guy who paints octopuses on vice presidents' heads. I had actually told the Veeptopus guy that he should send one of his Fillmore paintings to the bar, and I think he's planning on it. So I told the owner to be on the lookout.

The Veeptopus painting would go well with the other Fillmore- and president-inspired artwork around the bar. 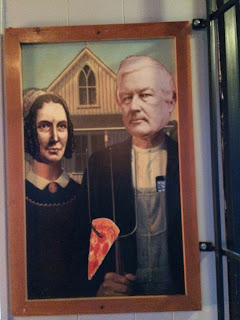 There are some other amusing Fillmore-touches around the place, too, like the Abigail Fillmore sign on the ladies' room. 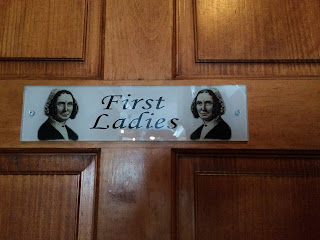 I asked the owner if he had any more of the stickers that lined the windows. He said he had sold out of them, but when I looked disappointed he said he'd dig around and try to find one, which he did. Yay! 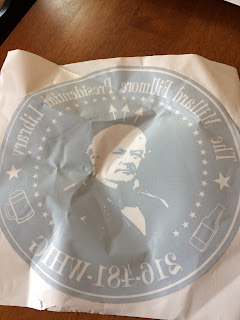 I told Mr. Presidentressor I'm going to stick it on our bedroom window and I think he thinks I'm kidding.

Eventually our friend Amy met up with us, and she took a selfie with Franklin Pierce, who's her son's favorite president. (That's actually Becky in the photo, not Amy.) 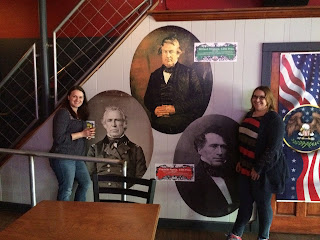 We left to go to dinner before it got too late, so I can't say what it's like when things get hopping. I enjoyed it though, and I'll be sure to go back if/when I'm in Cleveland again. The bar has only been open for about 18 months, but I certainly hope it becomes a fixture. The owner said they recently had a birthday party for Fillmore and lots of people attended, so that's good to hear. (I was also bummed that I hadn't timed things a bit differently to be able to attend. Maybe next year.) Bottom line: All presidents should have libraries like this one.
Posted by Jen Presidentress at 6:56 AM 1 comment: