You'd think "Who's your favorite president?" is something I get asked a lot, but it isn't. Mostly people ask "Why presidents?" in the same incredulous tone they use when asking why I moved from Southern California to Northern Illinois.

So, you didn't ask but I'm going to answer anyway, about my favorite president at least. (As for why the obsession, I have no answer. As for the California-Illinois thing, that's a discussion for another day.)

The truth is that I have a few favorites. In no particular order, they are:

Abraham Lincoln
This one seems kind of obvious. When people discuss the greatest presidents, Lincoln is always at or near the top, although I don't see how he can ever be rated lower than number one. Abraham Lincoln is like Babe Ruth. Babe Ruth is the greatest baseball player of all time. Not Mantle, not Mays, not Williams, not DiMaggio. It's Ruth. And it's Lincoln. It just is.

That's not to say that "the best" always has to be "the favorite" (Babe Ruth isn't my favorite baseball player), but Lincoln is definitely part of the three-way tie for my favorite.

Theodore Roosevelt
I'm a little conflicted on TR's presidency because I'm not just a fan of presidents; I'm also a fan of turn-of-the-century business moguls. (I totally need to make another blog called RobberBaroness.com.) Teddy as Trust-Buster caused some of my favorite historical figures to be pitted against one another, and that's uncomfortable but also kind of awesome. He was more hawkish than I'd like, but his administration did result in several important reforms.

More than anything, though, he was a fascinating human being. The guy taxidermied his own animals as a kid. He wrote several books, including a history of the War of 1812, just for fun. He overcame severe asthma to become a star athlete, and was partially blinded in one eye while boxing...when he was president. And there was the whole Rough Rider thing. And he was president. And so very, very, very much more.

The guy was truly the most interesting man in the world. Wait, I feel a meme coming on. 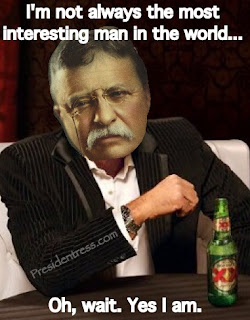 William Howard Taft
Remember I said that "favorite" and "best" don't always align? No one will ever accuse Taft of being among the greatest presidents, and it's not Taft's presidency that landed him on this list. Instead, it's because of his character, and also because I've always felt bad for him. Everyone knows he's the "fat guy," but most people don't know he was also Chief Justice of the Supreme Court (after he was president). Supreme Court Justice is the role he always aspired to, and he sort of got thrust into the whole presidential thing against his will. He didn't like acting as a politician and he didn't want to be president. In many ways, he was too principled to succeed in politics, which is probably why he didn't.
Posted by Jen Presidentress at 7:25 AM