Although most of my summer was filled with non-presidential stuff like taking the kids to swimming lessons, taking the kids mini-golfing, trying not to get killed by mosquitos, and writing Sean Spicer Fan Fiction, I did manage some presidential fun, too. With summer "officially" over, I wanted to take a few minutes to write a "What I Did This Summer" eassay...Presidentress-style.

In no particular order, here are the presidential highlights from my summer:

A few months ago, Howard from Plodding Through the Presidents invited me to join a Facebook group for American history fanatics. There's the typical link-sharing and conversation, but the owner of the group also runs a daily quiz of some sort. Over the summer, he decided to mix things up and instead of a quiz each day, he presented the Presidential Fight Club Tournament, a series of polls to determine which president would dominate in hand-to-hand combat.

He created four regional brackets and matched up two presidents per day, which we then voted on. Winners advanced tournament-style. Unlike the famous "Presidential Knife-Fight-to-the Death," this contest allowed no weapons, and it assumed that the presidents were in the physical (and mental) condition they were in around age 35. (Side note: I just learned there's a Presidential Knife-Fight Game. This is very important information.)

Anyway, the Presidential Fight Club Tournament wound up being a highlight of my summer...which might say a lot about me and my summer. Some of the matchups were painfully dull, like James Buchanan vs. Woodrow Wilson. Some were painfully difficult to decide, like Teddy Roosevelt vs. Abraham Lincoln. My choices didn't always win (I would have bet on Taft going much farther than he did, although he did beat Obama in the first round), but it was thrilling nonetheless.

The final match came down to George Washington vs. TR, with Teddy ultimately taking home the prize. One of those final matches against Washington also produced this remarkable conversation between two of the group members: As soon as the kids were done with school, we took off on a Disney World vacation. Toward the end of that trip, after an unbelievably sweaty day at the Magic Kingdom, we were having dinner at 'Ohana at the Polynesian Resort when I saw that JD and Kate of Hottest Heads of State had posted on Facebook that they, too, were at the Polynesian Resort.

Frantic Facebook messaging and texting ensued, and before I knew it, Kate was standing at our table asking if I was Jennie. (My mermaid mouse ears served an important role in my cosplay as Ariel, and also as a way to identify me in a huge crowd.) 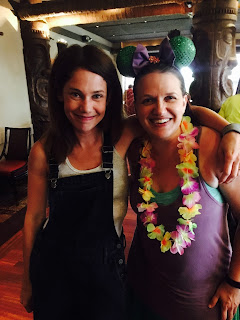 Kate couldn't stay long because JD and their kids were waiting for their table at another restaurant, but I was super excited that serendipity put us in the same place at the same time, like when Harry Truman and Thomas Dewey wound up having dinner in the same New York restaurant (except that Kate and I like each other).

Speaking of Truman... If you missed my recent post about our trip to Independence to see the Truman Home and Library, you can read that here.

You can also read about my highly successful patriotic jello experiment (which could easily be altered for different holidays!). It's much easier to make than you'd think, so get on it.

So, that's my presidential summer in a nutshell. Stay tuned throughout the fall for more presidential insights, and maybe a giveaway! And also definitely more Sean Spicer fanfic.
Posted by Jen Presidentress at 1:46 PM 1 comment: