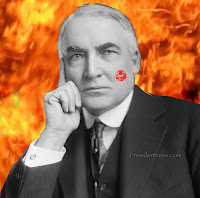 When we think of lecherous presidents, Bill Clinton might jump to mind before, say, Warren G. Harding, but perhaps it shouldn't be that way. Warren might or might not have been quite the playboy he was made out to be (and trust me--he was made out to be one), but one thing is certain: He had an ongoing affair with his friend's wife before and during his tenure as a US senator from Ohio.

Oh, a powerful, charismatic man having an affair? Yawn. But what if his mistress were also a German sympathizer and potential enemy spy in the time leading up to and encompassing World War I? Could that influence his votes on war-related matters? Could he knowingly or unwittingly furnish her with information? And when the feds got wind of the whole thing, how would it impact his presidential campaign? Now we're talking.

I recently finished reading The Harding Affair: Love and Espionage During the Great War by James David Robenalt. I started reading it a couple months ago, but honestly, the book was slow-going, especially at first. You'd think a story like this would be full of passion and intrigue, but really it wasn't--at least not at first. Warren G. Harding was seriously the most boring adulterer ever. I slogged through the first half of the book, forcing myself to keep reading only because I'm kind of anal about having to finish books that I start. I'm glad I kept at it, though, because things eventually picked up about halfway through. (It took me two months to read the first half, and two days to read the second half.)

About a year ago there was some media buzz about Harding's love letters finally being made public, and how they were "steamy" and "NSFW." Well, the author of this book had gotten his hands on those letters several years ago and used them for the basis of this book. Out of thousands of pages of letters, the few lines that got media attention were really the only steamy ones. The vast majority of the correspondence seems to have been redundant and kind of obsessive. I wound up greatly disliking Harding and his mistress--not because they were committing adultery but because they were just so bad at it.

But back to the story. So Harding and his wife were friends with a couple named Jim and Carrie Phillips. Carrie, according to Harding, was a gorgeous, intelligent, intriguing woman, and the two of them "courted" for three years before they consummated their relationship. (Harding seems to make a big deal about this.) Their affair would last for years.

Carrie Phillips was an American of German descent, and she and her daughter Isabelle lived for a while in Germany in the time leading up to World War I. She and Warren kept in close contact during that period, and he hated that she was so far away. She wasn't thrilled with the idea of Harding running for senator (and even less thrilled later on when he considered running for president). She also hated Harding's wife Florence, and loathed when Harding actually spent time with her.

We don't get to hear much of Carrie's voice from these letters because they're mostly ones that Harding sent to her, although he does often quote parts of her letters in his replies, or alludes to things that she said. Based on his letters, Carrie comes across as a jealous, manipulative person who often tried to upset him by saying hurtful things and suggesting that she wanted to take up with other men.

Most of his letters lament that she doesn't love him as much as he loves her, but he also continuously begs her to meet him, and he is constantly mentioning past encounters.

See what I mean? I wanted to reach through time and shake both of them by the shoulders and tell them to move on.

Anyway, when Carrie and daughter Isabelle came back from Germany, World War I was brewing and tensions were high. Although America managed to mostly stay out of it at first, eventually it became apparent that the United States would have to do something, and that something was likely to be war. As a senator, Warren G. Harding would be involved in voting on a declaration of war or other measures the United States might take.

Things got tense between Warren and Carrie at that point. Actually, they were already tense, what with Carrie snubbing him all the time, but they were even more tense now that she was adamantly opposed to war with Germany and Harding was leaning strongly the other way.

That's when things got interesting. Harding was so obsessed with this woman, I wouldn't have been surprised if he had voted against the war to please her. Instead, he actually grew a spine and voted in favor of the war despite knowing it would tick her off.

Now, the US got a little panicky about espionage (and free speech) during this time, and anyone of German descent or anyone who spoke critically about the war was viewed suspiciously, at best. Carrie was outspoken in her opposition to the war, as was her daughter Isabelle, who had been schooled in Germany. Isabelle was also engaged to (or nearly engaged to) an American of German descent whose family likely included German spies. (One of these people was a baroness--an American who had married a German baron--who cavorted with young military recruits and who was found to be carrying an obvious code about US ship deployment.) This caused Carrie's family to come under scrutiny by the agency that would eventually become the FBI. Carrie and Isabelle had also vacationed for an extended period of time near a new military cantonment on the east coast, although the government seemed to not know or not care about that. In addition, she and Isabelle were living lavishly and spending far more money than husband Jim earned, raising suspicion that she was being paid for secret intelligence.

Investigators asked around about Carrie in her and Warren's hometown of Marion, Ohio. Everyone seemed to have suspicions about her, and everyone also seemed to know about her affair with Harding. The government agents felt it was possible she was using Harding for information she was then passing on to Germany.

Back in the Washington, someone alerted Harding that Carrie was under investigation and surveillance, and he understandably freaked out. It would look really bad if word got out that a US senator were having an affair with a potential enemy spy while the country was at war.

The part I can't get over, though, is that he continued to write to her--love letters and everything--and he continued to rendezvous with her even once they were both aware she was being monitored. That, my friends, takes balls. Or stupidity. Or possibly both.

Then Germany lost the war, and Carrie turned bitter. I mean, more so than she had been before. That's also around the time Harding announced his candidacy for president. Like any levelheaded person, Carrie decided to extort money from him. She would receive $5,000 per year in exchange for her silence. The book seems to indicate that it was Harding paying the money, but I've read elsewhere that the Republican National Committee is the body that came to an agreement with her, paying her stipend and also for trips to Europe.

A fun side story to this whole thing is the tale of Nan Britton. She was a young lady (apparently friends with Carrie's daughter Isabelle) who claims to have also had an affair with Harding. She wrote a tell-all book a few years after Harding's death alleging that Harding fathered her child. The book was a huge sensation when it was published in 1927, and Harding obviously wasn't around to refute anything.

The love letters Harding sent Carrie give some insight into the veracity (or lack thereof) of Nan's claims. Nan's story puts Harding in certain places and times that are corroborated by his letters to Carrie. But it also seems unlikely that Nan would have been with him in those places, or at least not to the extent she alleges. (It might be true that he went from Cleveland to New York to Washington in three days, but given that tight schedule, would he have had time for leisurely strolls through the park with his new young lover?) Author Robenalt suspects that Nan might have had access to Carrie's letters and might have used them to help fabricate or bolster her story. It's still not clear whether or not Harding and Britton had an affair, or to what extent if they did.

Another mystery is why the story of Harding's affair with Carrie, especially as a German sympathizer and possible spy, never came to light during his presidential campaign. Carrie had her hush money, but there were people in the US government (specifically in the Wilson administration, of which Harding was quite critical) who had this information and didn't use it. It's not clear whether it was some kind of political motivation, or perhaps money or incompetence that kept them quiet.

Harding won the election but served only half his term before he died of a heart attack. Some rumors claim that his wife conspired with his doctor to poison him. That's kind of understandable and makes for a much better story, but probably isn't true. His short presidency was riddled with scandals, which might not be much of a surprise in retrospect, though to be fair, he wasn't directly involved in Teapot Dome. Today Harding is usually considered one of America's worst presidents.

Last year during the media frenzy over the release of the love letters, some people speculated that the letters would actually help Harding's image by making him seem more human. The letters definitely do give us better insight into Harding's personality, but I'm not sure the end result was overwhelmingly positive.

Posted by Jen Presidentress at 8:34 AM