I grew up in Ohio, but until last week I had never been to Cincinnati. See, I'm from Northeast Ohio, which meant I always viewed Cincinnati as "other." As "south." As "the Reds." But since William Howard Taft is one of my favorite presidents, and since his National Presidential Site is there, a trip to Cincinnati became a necessity--and I'm really glad it did, because that's a fun town!

I had intended for this to be a review of just the Taft site, but I'm going to include all the other things we did there, too. It turns out Cincinnati has some great food, and if Taft were alive today, I'm sure he'd enjoy it as much as we did. 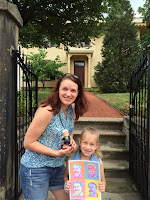 First, the Presidential Site. It's not as flashy as Lincoln's or as large as Hoover's (two sites we've been to this year), but it was quaint and informative. When we first got there, we walked past the visitor's center so we could take some photos with the props we'd brought. Yes, you read that correctly. I brought my Taft bobblehead (courtesy of my friend Sunny!) and my daughter Anna brought the Andy Warhol-inspired portrait she made for Presidents Day. A concerned park ranger, thinking we were lost, came over to make sure we knew where the entrance was.

Once we got our portrait and bobblehead tucked back into the car, we headed into the house for an introductory video. Now, we've encountered many nice park rangers (like the ones who helped us when my baby threw up all over Abraham Lincoln's sidewalk--I'll have to blog about that), but our ranger at Taft's house was especially great. His name was Jason, and he was knowledgable, passionate, and funny. We loved him, and I think he might have loved us, too.

When Jason asked if we were stopping by on our way to our destination, I said this was our destination. A bit surprised, he asked, "Taft or Cincinnati?" I said Taft, and he just about fell over. I don't think he'd ever heard that before.

After the video, he showed us around the house. Very little of it is original, as it had been turned into apartments at one point. But it has been restored, and they have some of the family's furniture in there now. The kids got to play with some period toys, which was nice. Usually there's a strict hands-off policy in historic houses, so it was fun for them to get to do something. The upper level had displays we could browse on our own.

I was perplexed there was no information on the Billy Possum. Still, though, I was glad to have been able to visit Taft's home. We bid Jason adieu and headed off to lunch.

This was the first of the amazing restaurants we'd visit in Cincinnati. (We'd had Cincinnati chili the night before, and it was okay, but not drool-worthy.) Melt Eclectic Cafe, on the other hand, was drool-worthy. This place was featured on Diners, Drive-Ins, and Dives, and if all the places Guy goes to are as good as this one, I'll definitely seek them out. Mr. Presidentressor and I split an Artichoke Melt and a Verde Chicken sandwich, and both of them were the kinds of things you want to savor forever and never finish. 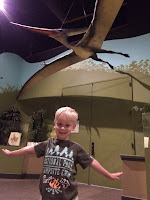 When we did finish, though, we headed over to the Cincinnati Museum of Natural History. Nothing puts me to sleep faster than natural history, but the kids wanted to go and we got free admission thanks to our Museum of Science and Industry membership, so we went. It was actually a pretty good museum. My eyes did glaze over a few times, but there were enough dead birds to keep me interested. What I really loved, though, was the building the museum was housed in. There's a whole complex of museums inside a fantastic art-deco train station from the 1930s. I could have stood there for hours just staring at the architecture and lettering. Ironically, I have no photos of it. I figured I probably couldn't do it justice, so I didn't try.

Following the museum, we went to Graeter's for ice cream. Although this was our first time in Cincinnati, it wasn't the first time we'd had the ice cream. Many years ago, one of Mr. Presidentressor's friends sent him a case of Graeter's ice cream. Mr. Presidentressor, being the nice guy he is, decided he'd just bring home one pint and would distribute the rest to his co-workers. He let them choose, of course, and at the end of the evening he came home with...a pint of vanilla. Yay. In Cincinnati, though, I had Black Raspberry Chocolate Chip, and it was outstanding.

Then that evening, we went to Eli's Barbeque, where we had some of the best pulled pork we've ever eaten. Great ribs and jalapeño cornbread, too. 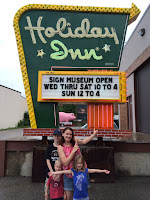 The next day we went to the American Sign Museum. Initially I thought this would be a chintzy roadside attraction. (We're a big fan of chintzy roadside attractions, so I don't say that with derision. I just wasn't expecting much.) This place is amazing, though!  It's anything but chintzy. It is a legitimate, honest-to-goodness, entertaining-yet-educational museum. We wound up spending three hours there! The first hour we looked around at all the signs, including one Mr. Presidentressor recognized from SoCal.

The second hour or so was spent on a tour led by the museum's founder. I didn't think the tour would tell us anything we hadn't already seen by walking around, but I was wrong again. This guy is incredibly knowledgable about signs, having been in the business his whole life. (His great-grandfather founded a trade publication for sign-makers, and the magazine is still in the family.) There's so much I never knew--and never thought to think about--regarding signs. And as he said at one point in the tour, the museum isn't just about the history of signs; it's about the history of the United States as told through signs, and that's so true. 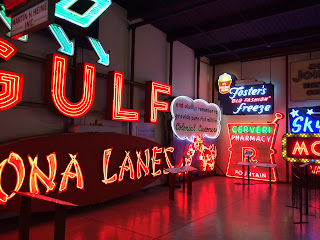 Finally, we were able to go into the adjacent-but-separate neon shop, where we received a demonstration about bending tubing and lighting signs with different gases. The kids loved that! I highly recommend the Sign Museum to anyone in, near, or passing through the Cincinnati area. I can't say enough good things about it.

Our final meal in Cincinnati was at Tom + Chee, a grilled cheese restaurant. They've expanded beyond Cincinnati, but not into Chicago yet. I had a tomato-y, garlicky grilled cheese with creamy tomato-basil soup, and it was fantastic. The grilled cheese donuts were a fun novelty for dessert, but not something I'd get regularly.

So what did we learn? We learned a lot about signs. We learned that the park rangers at the Taft home really want people to know that William Howard Taft did not get stuck in a bathtub (and they're impressed when you already know that). We learned that Cincinnati has some great food and some funky little neighborhoods. I think Taft would have enjoyed the barbeque.

Posted by Jen Presidentress at 8:17 AM