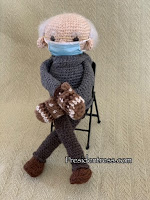 Like most people, I loved all the Bernie memes. Approximately 97 people sent me photos of crocheted Bernie dolls, and since I've made dolls like that before (Warren G. Harding and Alexander Hamilton), I knew that I could make a Bernie doll. I also knew that I didn't really want to. They take a lot of time, and I would have needed to go out to buy wire, and I just wasn't feeling it.

But when CraftyIsCool, one of my favorite designers (in fact, the one who created the Hamilton pattern and whose instructions I based Harding off of), released a pattern that didn't require wire, I was suddenly all over it. I downloaded the pattern and hopped on Amazon to order doll glasses and a chair!

Two days later, he was done! He is currently watching me write this, and it's hard to tell whether or not he approves. 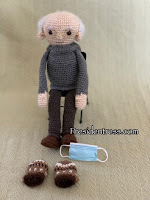 Posted by Jen Presidentress at 10:42 AM No comments: