Drinking with the Presidents: Teddy Roosevelt 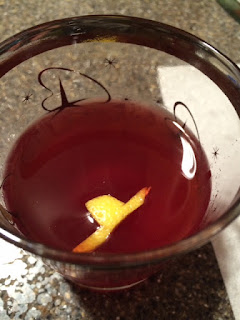 A while back, I posted a meme of Theodore Roosevelt filling in for the Dos Equis guy. Someone took issue with the photo, pointing out that TR didn't drink alcohol. That wasn't the point, of course, but it got me thinking. I knew it wasn't true that TR never drank, but I did some research (read: quick google search) and found it true that he didn't drink much. He probably didn't have the time to.

We have proof that he did drink, at least a little, because he testified about it under oath. When a Michigan newspaper ran a column stating that Roosevelt was drunk in public, Teddy harnessed his infinite energy into proving it wrong. He sued the paper for libel, and during the trial person after person testified that they had never seen Roosevelt drunk. TR himself took the stand and recounted practically every drink he had ever imbibed, which was hardly the list of a drunkard. The newspaper wound up admitting it was wrong, and Roosevelt, just happy to have his name cleared, asked the judge to impose the lowest possible damages: six cents.

While reading about this, I also found a couple cocktails created in Teddy's honor. It's likely he never actually tasted them, but that doesn't mean the rest of us can't benefit. So the other day, Mr. Presidentressor and I had some friends over to try a "Teddy Roosevelt's Hat." This was a recipe I found online and also in a book about the history of presidential drinking, aptly titled Mint Juleps with Teddy Roosevelt.

Teddy Roosevelt's Hat was invented during the 1912 Republican Convention by a bartender at Chicago's Congress Hotel. That convention found current-president Taft pitted in a heated and animated race against former-president Roosevelt for the Republican nomination. A server at the hotel set the drinks in front of two delegates and dropped a lemon-peel hat into each glass, explaining it was symbolic of Roosevelt throwing his hat into the ring. The Roosevelt delegate was tickled pink, while the Taft delegate threw his lemon hat onto the floor.

The drink requires only five ingredients, all relatively easy to find: gin, dubonnet, orange bitters, raspberry syrup, and lemon peel. I'd never had dubonnet, but I found some at our local liquor store. They also had a half gallon of raspberry-flavored high-fructose corn syrup, which I didn't want, so I opted to make my own raspberry syrup. (Simmer 2/3 c water with 2/3 c sugar for about five minutes. Remove from heat and mash in 1 c raspberries--I used frozen. Let sit for an hour, then strain through a fine mesh sieve.) 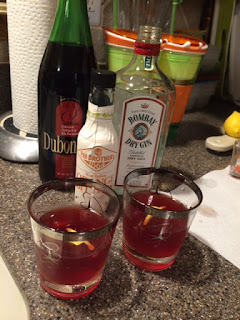 The recipe for Teddy Roosevelt's Hat is as follows:

Put ice into a cocktail shaker.

Shake thoroughly and strain into a glass. Add a piece of lemon peel cut into the shape of a hat. Enjoy! (You can opt to fish out the peel and throw it on the floor, too, depending on your persuasion or on how drunk you are.)

Mr. Presidentressor, our guests, and I are not big fans of gin, so we weren't sure what to expect. The result was fantastic, though. Our one friend commented that he wouldn't have known there was gin in it if I hadn't told him. The drink was fruity, a little sweet, a little sour, a little herby. I would drink it again--and will. I bet Teddy would have approved.
Posted by Jen Presidentress at 11:17 AM

Email ThisBlogThis!Share to TwitterShare to FacebookShare to Pinterest
Labels: Drinking with the Presidents, Teddy Roosevelt