How do some yarn skeins, crochet hooks, couple of eyes

And some gold beads, worked up in a frenzy of bold speed
(Ignore needs of my family), from pattern slightly altered
Turn into a cool plush doll Founding Father? 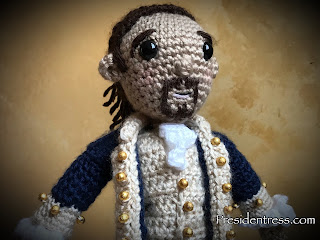 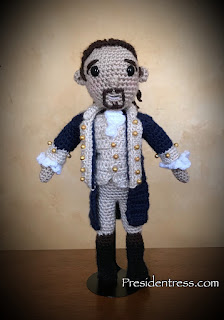 I wish I could say I came up with this idea on my own, but I did not. I used a pattern from Allison Hoffman, although I did make some small changes to it, like making his coat blue instead of beige. I also made some technical yarn-type changes, but I'll spare you the crochet minutiae here. (If you'd like a detailed explanation, you can visit my project on Ravelry.)

Anyway, I'd wanted to make this project all year, but I didn't start seriously thinking about it until October. At that point, however, I was working on another very involved crochet project (a retro ornament throw for my grandma) that I knew might not get done in time for Christmas, so I wasn't sure HamiLin would happen at all. As fate would have it, I ran out of yarn for the ornament throw and had to wait two weeks for the new yarn to arrive. In the meantime, I went ahead and started the doll, which only took a few days to make, working an hour or two here and there.

I saved the face for last because I was terrified of it. The face is what really makes or breaks one of these things, in my opinion, and I don't know anything about embroidery. (You might remember that last year I used Allison Hoffman's book AmiguruMe to style my own Warren G. Harding doll, but his face wound up looking a bit more like the Shah of Iran than Harding himself. At least I nailed the "world leader" look.) 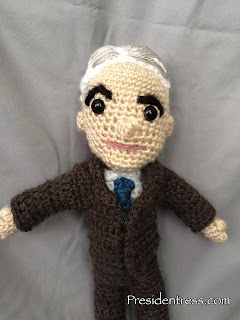 Thankfully I discovered that Hoffman had created a YouTube video showing some face embroidery, so armed with that new knowledge (and a curved needle, which I hadn't even known existed), I tackled HamiLin's face.

It took a few attempts, lots of sweating and swearing, and more time than any other part of the doll, but I think I finally got it right. (It's not easy to capture those intelligent eyes in a hunger-pang frame...) 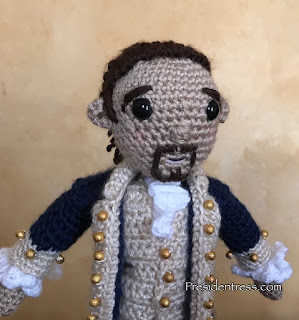 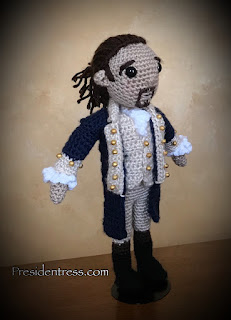 I wound up finishing HamiLin about two weeks before Christmas, and the suspense of not being able to give it until Christmas Day was killing me, but I made it.

Needless to say, he amazed and astonished.

Posted by Jen Presidentress at 8:31 AM