Hoover with a Side of Reagan

A few months ago we passed through West Branch, Iowa, on our way to California. I wanted to stop at the Herbert Hoover National Historic Site, but it was -14 that day, and the site includes several small buildings located outdoors. Instead I decided it would make a great day trip sometime when the weather was warmer, and that's how we ended up there a couple days ago. 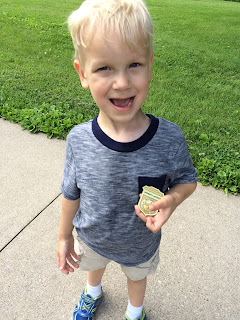 The site consists of a visitor's center, a museum, Hoover's birthplace cottage, a blacksmith shop like the one his father had, a Quaker/Friends meetinghouse, a schoolhouse, a statue of Isis, a tallgrass prairie, and his (and First Lady Lou's) gravesite. The only building that requires a fee is the museum, which was the least exciting part for the kids, but we dragged them to it anyway.

The site has a Junior Ranger program, which we're big fans of at National Parks and Sites. Kids visit different parts of the complex and complete activities in a booklet. When they're done they're named Junior Park Rangers and receive a badge and/or patch. (In the case of the Hoover site, they received both! They also got nice full-sized Hoover pencils, a nice change from the tiny golf pencils we've gotten at other National Parks.)

We were there on a Thursday before school let out, so we had the entire place almost entirely to ourselves. Other than employees, I think we spotted five other people the whole time.

I had been to the museum once before, but that was 20 years ago so it was nice to "catch up" with Herbert again.

Most people think of him (if they think of him at all) as the guy who caused the Great Depression, but it wasn't his fault; he's just the one who got stuck holding the bag. Historians can debate for hours whether Hoover did enough to help fix the problem, whether his policies (which involved indirect aid rather than direct funding) would have eventually worked, whether FDR's policies are what saved the county, whether they made things worse, whether he just got "lucky," etc. But regardless, Hoover is often unfairly demonized as uncaring when nothing could be further from the truth. He was a lifelong humanitarian who cared deeply about people within the country and abroad.

We didn't have as much time at the museum as I would have liked. We spent a long time exploring the other buildings beforehand, plus our arrival in West Branch had been delayed by at least an hour due to a major crash that shut down Interstate 80. We did get to absorb most of it, though.

On the way back we needed to stop for dinner so we pulled off in Dixon, Illinois, location of Ronald Reagan's boyhood home. We had dinner then drove by the house. It was too late to go in, but we took a couple pictures of the outside and also snapped a few pics with the statue of Reagan holding a handful of corn. 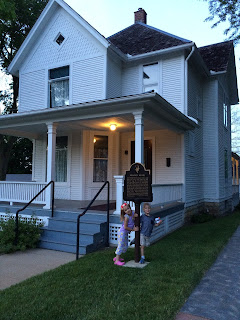 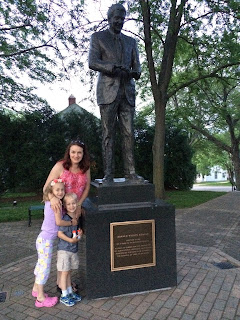 We hadn't intended to see two presidential houses that day, but it worked out well. (One of the benefits of living in the Midwest is that there are many presidential sites within a day's drive. I hope to hit several more this summer.)
Posted by Jen Presidentress at 9:53 AM