A few months ago I was perusing comments on Sarah Vowell's Facebook page and saw someone mention a new book that Vowell fans would like, Dead Presidents: An American Adventure into the Strange Deaths and Surprising Afterlives of Our Nation's Leaders by Brady Carlson. There's almost nothing I love more than dead presidents, so I was game! I also hoped that the book would be as insightful and amusing as Vowell's works, which I've written about before.

I had planned to read Dead Presidents in a few days and pound out a review immediately, but then I got sidetracked by life and by this blog where a guy writes hilarious, snarky reviews of every episode of Full House. Anyway, I finally got around to finishing the book, and I'm a little ashamed it took me so long. (But since you didn't know I was reading it in the first place, I guess that doesn't matter.)

Basically Carlson visits the gravesites of all of the dead presidents, but the book is about much, much more than that. He gives some details about their lives and deaths, of course, but also offers some insight into their "afterlives"---not their actual afterlives, if applicable, but rather the legacies their deaths have left.

Carlson examines things like the evolution of state funerals, presidential wishes as to how they want to be remembered, and the ways people choose to memorialize (or not) their fallen leaders. As he says in his introduction, "[T]he chief job of a dead president is to tell us about ourselves, our history, and how we imagine our past and future." I think the book does a good job tackling that, without being overly pedantic. There's a nice balance of humor, information, and insight.

Let's explore the pros and cons of this book.

1) It was funny. I hesitate to compare it to Sarah Vowell's works because they're funny in different ways, but that's not a bad thing. I wound up highlighting a ton of amusing lines, and I laughed out loud in a few places.

He describes the deaths of John Adams and Thomas Jefferson---both on July 4, 1826---as "the most famous death duet in American political history." He says the Congressional Cemetery vault is "nondescript but sturdy and dry, the kind of place you'd want to store a president if you needed to." He describes Millard Fillmore as "the Charlie Brown Christmas tree of presidents."

2) I learned things. I had never really given much thought to how presidential libraries and monuments (other than the biggies) came to be. Carlson explores the politics that have shaped how/when/where/why monuments or sites are erected, and the way that private foundations are able to help shape legacies through modern presidential libraries. I also learned that in Paraguay, there's a soccer team named Club Presidente Hayes.

3) It's not chronological. Arranging presidential stuff chronologically makes a ton of sense, but it also gets redundant and kind of boring. For me, it's hard having to wade through the Tylers and Van Burens before getting to the interesting ones like the Arthurs and McKinleys, then having to wrap up with the obligatory Fords and Reagans. (I realize other people might have different definitions of the "interesting" ones. That's cool. No judgement.)

The book does start off with a chapter on Washington, but after that instead of going through the presidents one-by-one, Carlson groups them together by topic. The connections between them are sometimes a bit tenuous, but like I said, it keeps things lively and helps make his points more cohesive.

For example, William Henry Harrison, Woodrow Wilson, Gerald Ford, and Richard Nixon are grouped in a chapter about presidential funerals. William Howard Taft, Andrew Jackson, and Thomas Jefferson make up a chapter on how presidents' reputations change over time. (JFK does get his own chapter, which is probably warranted as his was the first presidential death of the television era, plus it was an assassination, and it was comparatively recent, meaning that feelings and legacies---not to mention conspiracy theories---are still actively developing.)

1) The semicolons. Oh my god, the semicolons. I have never in my life seen so many semicolons in one piece of writing. In fairness, they're used properly, so I can't fault Carlson too much. There are just so many that it started to get distracting. I tried using the Kindle search function to quantify exactly how many there were, but apparently it won't let me search for punctuation. I swear it averaged one every two pages, though.

2) Some of the stories felt a bit rushed, or seemed like they were included only out of obligation. I can understand that, though: Some presidents (and their deaths) just weren't very interesting. There's not necessarily a lesson to be learned in everything. I imagine when you're tackling three dozen dead presidents, you have to be selective in what you include and what you don't. There were definitely topics I would have loved seeing explored in more depth, and some that could have been handled with less detail (the Coolidge cheese factory: not as exciting as one would think...or possibly exactly as exciting as one would think).

Overall, this was an interesting, informative, and largely amusing read. Because there were so many people and ideas being explored, we don't get the same level of detail or insight found in Assassination Vacation, but I didn't get the impression that Carlson was trying to recreate Assassination Vacation on a larger scale; he was trying to do his own thing, and it works for what it is. (Do you see what I did there?)

You can purchase Dead Presidents at Amazon and other fine retailers. Remember that shopping through my affiliate links helps to support this blog, and I love you for it.
Posted by Jen Presidentress at 12:37 PM 1 comment:

The other day I walked into the kitchen and saw a photo in Mr. Presidentressor's newsfeed.

"Is that Stephen Douglas?" I asked. I peered closer and saw it was actually Andrew Johnson. But boy did it look like Stephen Douglas. And thus a Separated at Birth was born.

When I googled their images, I noticed that some photos of Stephen Douglas also look a lot like James Buchanan. 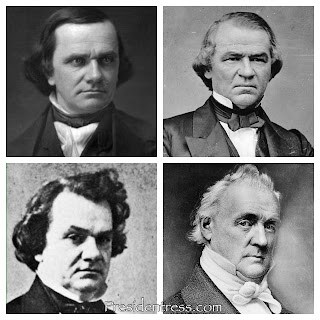 How weird is that? Lincoln's most famous political foe looking so similar to both his presidential predecessor and successor? How has no one noticed that before? (To be fair, it's entirely possible that someone has---I didn't bother researching it.)
Posted by Jen Presidentress at 2:16 PM No comments: