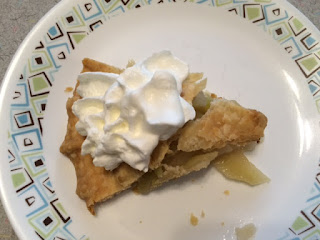 All right, so this isn't a presidential recipe per se, but a while back I posted a recipe for a Dolley Madison cake that called for rosewater as an ingredient. Intrigued by the idea of rosewater usage back in the day, I did some research and found that it was a common flavoring in sweets back then as vanilla wasn't yet a thing.

I also learned that the Shakers, a religious utopian community best known for their furniture, were also known for making high-quality rosewater. This further intrigued me because I'm from Shaker Heights, Ohio, a city named for a Shaker community that used to reside there (but was long gone by the time the modern-day city was incorporated). I also learned that the Shakers made an apple pie with rosewater, and I love pie. I mean seriously, I love pie.

It was only a matter of time, then, before I made a rosewater-apple pie of my own. 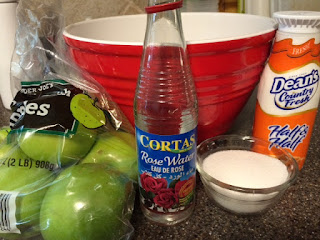 tons of recipes, but most of them are exactly the same. You'll need:

1 tbsp heavy cream (I used half-and-half because I didn't have any cream, and neither did my corner drugstore) 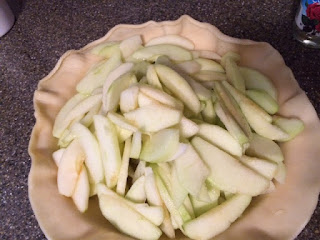 Core, peel, and slice the apples and dump into a large bowl.

Add the sugar, cream, and rosewater, and mix together.

Pour the mixture into the bottom crust, top with the top crust, and seal and crimp the edges. Slice a few vents into the top. I brushed a bit of cream (okay, half-and-half) on the top crust before venting.

Bake about 50 minutes. (You might want to set the pie on a foil-lined baking sheet to catch any spills.) Cool, slice, and enjoy. 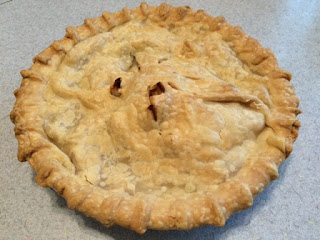 If you have a hankering for a traditional, cinnamon-laden, thick and hearty apple pie, you might be disappointed. Instead, this pie is light and delicate. The word that kept running through my head as I ate it was, "Delightful. Delightful. Delightful." This isn't a pie you'd serve at Thanksgiving (I mean, you can. I don't want to stop anyone from eating pie at Thanksgiving--or ever), but if you're having an elegant outdoor tea party in June...oh my god, make this pie. Or anytime. Even at Thanksgiving. Like I said: eat pie.

Posted by Jen Presidentress at 6:12 AM

Email ThisBlogThis!Share to TwitterShare to FacebookShare to Pinterest
Labels: Cooking with the Presidents