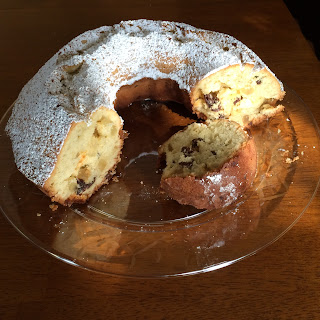 I have this thing called The Presidents Cookbook, from 1968. When I bought it, my plan was to sift (ha) through the different presidential recipes and make a presidential feast out of the best of them. Instead, I learned that until at least 1968, presidents ate disgusting stuff. (See my post about the Billy Possum. Sadly, this book doesn't have a recipe for possum-and-taters, but there is a recipe for Coon-and-Squirrel Pie, courtesy of Zachary Taylor.) Even the later presidents didn't have any main courses that seemed appealing.

Needless to say, I didn't have a presidential feast. The good news is there were a few desserts that looked awfully tasty. I made an okay blackberry cake a la Andrew Jackson, but the one I really loved was a Dolley Madison cake. I have made it three times now, with my third one baking as I type.

I did make a few adaptations to the recipe, which I'll share with you now in case you'd like to make your own Dolley Madison cake (and you should).

First, I've halved the recipe. Cut in half, the batter makes a perfect full-size bundt cake. For the actual recipe, you're supposed to pour all the batter (so two full-sized-bundt-cakes-worth) into one large pan and bake it at 275-300 degrees until it's done, which at that rate and temperature would probably take hours. I don't wait hours for my cakes, which is why I made it smaller (and also baked it at 350).

This recipe was written using weight rather than volume for most ingredients. I'd never measured that way before, but I did have a kitchen scale sitting unused in my pantry, so I went for it. It was actually a lot easier than fiddling with measuring cups, and I kinda wish more recipes were still written that way. But in case you're not into using a scale for your baking, I've included approximations if you'd like to use cups.

The recipe calls for citron and raisins. Halved, you should use 1/4 lb of citron and 1/2 lb of raisins, but that seemed like too many raisins, so I did 1/4 lb of each. If you're not familiar with citron (I wasn't, really, though I'm sure I've had it before in various sweet breads), it's a candied citrus peel that basically tastes like nothing. I couldn't find it in a grocery store so I ordered some from Amazon. You could probably skip the citron if you want. You also don't need to measure it too exactly. A quarter-pound is half of one of those containers, and you can just throw in a handful or two of raisins.

This recipe is also a little unusual (by today's standards) in using rosewater. That's something you don't much see nowadays outside of Middle Eastern or Indian cooking. But it turns out that in James Madison's day, rosewater was a common flavoring before vanilla became popular. I googled it and learned that the Shakers used to make excellent quality rosewater, and one of its uses was in apple pie. This was particularly interesting to me, as I'm from Shaker Heights, Ohio, and I now have "making a rosewater-apple pie" on my to-do list for this summer.

But I digress. You can probably find rosewater at your grocery store, either in the baking aisle or an ethnic-food aisle. If you can't find it there, a Middle Eastern or Indian grocery store will certainly have it. Or there's always Amazon.

The only major change I made to the recipe was not using nutmeg. I don't hate nutmeg but I'm not a huge fan of it either, so I decided to go out on a limb and use cardamom for three reasons. 1) I love cardamom. 2) It goes so well with rosewater! 3) It's not that out-there for a Dolley Madison cake. A while back I found a recipe for a cake Dolley supposedly loved...I think it was a Black Pepper-Ginger-Cardamom cake. So I figure as a spice she knew and liked, there's a chance it could have ended up in this cake, too. The actual recipe calls for one grated nutmeg (meaning you'd use half a grated nutmeg for my reduced recipe). I'm not sure what that works out to in terms of teaspoons, but I used 1/2 tsp. of cardamom. (Actually, the first two times I made the cake, I just dumped some in without measuring. That works, too.) 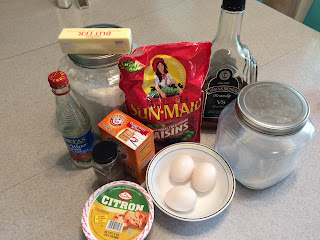 You'll also need butter, baking soda, eggs, and brandy. The original recipe says to dissolve the baking soda in a bit of hot water and add it after the eggs. That seemed too old-school, so I mixed the baking soda (no water) in with the flour.

Without further ado, here's the recipe I made. Keep in mind this batter will fill one normal-sized bundt pan. Feel free to use a loaf pan or other cake pans, and adjust your baking time accordingly.

Dolley Madison Cake (as modified by The Presidentress)

Preheat oven to 350 and prepare your cake pan(s) by buttering and flouring them, or whatever you normally do. 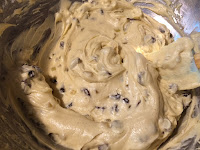 In a bowl, mix baking soda into the flour and set aside.

In a large bowl, cream the butter and sugar until fluffy. (I used an electric mixer, but if you want to be really authentic, you could always do it by hand.)

Add the beaten eggs and mix to combine.

Add the brandy, rosewater, and cardamom and mix until just combined.

With a large spoon, stir in the citron and raisins.

Pour into your pan(s) and bake until done. (You can often tell when a cake is done when it starts to smell done. It will also be a nice golden brown color, and a toothpick inserted into the center will come out clean.) My bundt cake took about 55 minutes.

I added a dusting of powdered sugar to my cake, but it tastes great on its own, too. 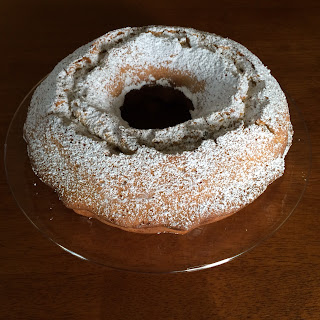 Posted by Jen Presidentress at 9:06 AM

Email ThisBlogThis!Share to TwitterShare to FacebookShare to Pinterest
Labels: Cooking with the Presidents, Madison