Presidentress' Night at the Museum

The Presidentress Family decided to end the summer with a bang, by visiting South Bend, Indiana.

South Bend had not been on my extensive and mostly unvisited list of destinations for this summer, but my dad (you'll remember him from the Barry Bostwick debacle) was there a couple weeks ago and raved about its Studebaker museum. He said that besides old cars, they had an exhibit about Lincoln's death, carriages that belonged to several presidents, plus an exhibit about the All-American Girl's Professional Baseball League. It definitely sounded like something I needed to see, so I moved South Bend to the top of my list.

The visit was...interesting. (If you want to learn about presidential carriages, keep reading. If you want to get to the part where we wind up trapped in the museum, scroll down under the terrible photo of us "dressed" as female baseball players.)

First, I screwed up. We got off to a late start because we didn't even decide to go to South Bend until after our late breakfast. Even so, and even after stopping for lunch, I figured we'd make it by 2:30, giving us plenty of time to take in the museum before it closed at 5:00. Except I forgot that most of Indiana---including South Bend, apparently---is in the Eastern time zone, meaning we lost an hour on the way and didn't really arrive until 3:30.

I also didn't know that the museum was actually two museums in the same building. The cars and presidential carriages were in one museum; the baseball stuff was in the other. That meant I had to decide whether to just see one museum (and if so, which?), or pay extra for both. The guy at the admission desk said people usually need an hour and a half just for one museum, but we could get through each one in 45 minutes if we didn't stop to read everything. With three kids in tow, I figured we'd be lucky if we got to read anything, so we opted for both.

We motored (see what I did there?) over to the Studebaker side first. I'd like to tell you all about the history of the Studebaker company and all their many innovative vehicles, but since we were short on time and not allowed to read anything, I skimmed and skipped over most of the descriptions. There were some cool things, though. Trust me.

The exhibit on Lincoln's death mainly consisted of blown-up photographs and masks of his face (i.e., stuff I've seen before), but there were some less-common artifacts, like John Wilkes Booth's ticket stub to Ford's Theater.

The pièce de résistance, of course, was a carriage that Lincoln took to the theater that fateful night. The carriage was later painted over several times, but restoration work has brought back its original color and Lincoln's initials on the side. 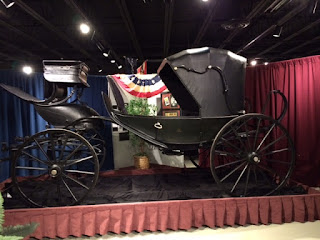 Just a few steps away were three carriages belonging to other presidents: Ulysses S. Grant, Benjamin Harrison, and William McKinley. As far as carriages go, they look like pretty much any other: black and...carriagey. McKinley's is distinctive not in style, but in the fact that he took it to the train station in Canton, Ohio, where he caught the train that took him to the Pan-American Exposition in Buffalo, where he met his doom. Yes, the Studebaker museum has two carriages that presidents rode to their deaths! 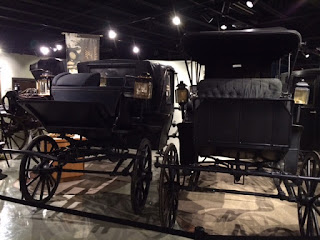 After looking at some cars, we scurried over to the history museum. We started with an exhibit about transportation on the first floor, then went down to the basement to see the more-local stuff and the All-American Girls Professional Baseball League exhibit.

We took this awful photo (Mr. Presidentressor said that he looks like a corpse from one of those Victorian death photos where they prop up dead people and pose them in normal situations). Then we wandered through the rest of the exhibits. 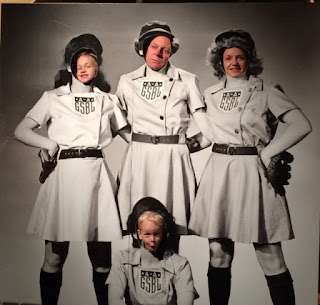 At one point I looked at my phone and saw it was 4:40, meaning we had 20 minutes left. I was fairly sure we were toward the end, so I felt confident we would make it. Around that same time, my 6-year-old told me she couldn't wait to step through the "time portal." She was pointing at a tunnel-like entrance into the next room, and I decided she was my favorite child of the day.

Anyway, about five minutes later, just as Anna had finally stepped into the time portal, we were suddenly plunged into darkness. Anna freaked out, wondering if she really had gone into a portal. The 11-year-old, who doesn't handle change well, started freaking out, and the 3-year-old was MIA.

Mr. Presidentressor and I activated the flashlights on our phones and located all the kids. We also realized the museum was very quiet, indicating we were the only people in the basement. I checked my phone again, wondering if somehow it was already 5:00, but saw that it was only 4:46. We assumed there was a power outage.

I wasn't sure if it would be quicker to go back the way we had come or to continue the way we had been heading. Feeling adventurous, we plunged into the unknown, through the time portal. I'm not entirely sure what was in that next room since it was completely black, but my flashlight/phone did pass over a few old-fashioned baby carriages, which are some of the most horrifying things one can find in a strange, dark room.

The next couple rooms contained other items randomly illuminated by my phone, including a plow and an old-fashioned bathtub. I'm sure there were tons of other things, too, but we didn't get to enjoy them. Because we couldn't see.

We finally made it back to the baseball room. But, in true horror-movie fashion, there was no way out. Seriously, the stairs we had come down were gone. The only way out appeared to be an elevator but we didn't attempt to use it because, remember, we thought the museum had lost power. I looked around in confusion, then remembered that the first thing I had seen upon coming down the stairs was that cut-out-photo-thing. I looked opposite it and saw a set of solid double doors, closed tight. I gave one a push and luckily it opened.

When we got upstairs, Mr. Presidentressor asked if there had been a power outage. One of the employees nonchalantly said, "No, the lights are on a timer and sometimes they go off early."

We thought that was a pretty lame answer. I confirmed with him that the museum doesn't close until 5, and he said yes but kind of shrugged it off and said our tickets were good for the next day, too, if we wanted to come back. We told him we were only in town for the afternoon. He offered to have someone turn the lights back on, but by that point it was almost 5:00, plus we now had three terrified kids to deal with, so we decided to pass.

I'm not sure I buy his explanation about the timer. If that's really the case, they should probably set it for a time well after closing so they can, you know, make sure no one is trapped in the building. It's more likely someone was too lazy to check the basement before closing up. Or maybe we can blame it on the ghost of William McKinley.
Posted by Jen Presidentress at 6:17 AM