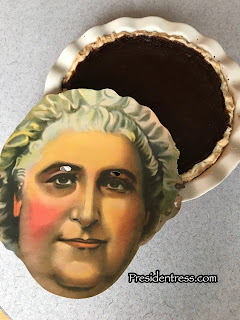 What intrigued me right away was the use of rosewater. Rosewater was a common flavoring before vanilla became a thing, and you might remember it from such posts as Dolley Madison Cake and Shaker Apple Pie. Now, I'll admit I was a bit skeptical. I don't even put vanilla in pumpkin pie, so putting rosewater in it seemed especially unusual. But it's probably historically accurate, and I'm always up for a presidential baking challenge, so game on!

Besides rosewater, the other unusual thing about this pie is the lack of eggs. You might notice a bowl of eggs sitting there, as did several people who commented on Facebook that the Mount Vernon cook forgot to add them. But apparently the eggs are for the crust (go figure) not the pie, and apparently the pie sets up just fine without them.

Now, this recipe calls for the use of an actual pumpkin. Mr. Presidentressor asked why I didn't just use one of the many cans of pumpkin puree we stockpiled last fall when the country was supposedly on the verge of a pumpkin shortage that never materialized, but I explained that I needed to be as authentic as possible in making this recipe.

And then I got historically inauthentic. This recipe wants you to cut, peel, and chunk the pumpkin, and then boil it. Peeling a raw pumpkin seems like a great way to lose a finger, so I decided to use my Instant Pot instead. Sorry, but it was way easier and quicker. I added a cup of water to the pot, put in the trivet, set the pumpkin in whole (sideways---the stem made it too tall otherwise), and cooked it on Manual for 10 minutes. When it was done, I let it sit for about 20 minutes, then took it out and easily sliced it open with a knife. The seeds practically fell out in one clump, and I was able to peel the pulp away from the skin with just my fingers and a spoon. Then I used my immersion blender to puree the pumpkin. 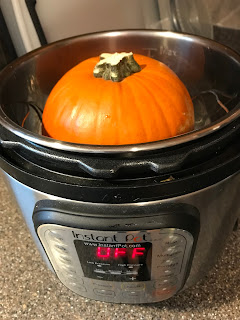 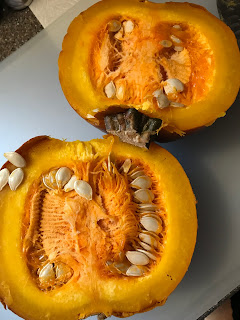 But look, the end result was the same, so I'm not going to apologize.

Per the recipe, I added to the pumpkin puree 1 tbsp of rosewater. Then I needed to add the spices "to taste." I decided upon 1 tsp of cinnamon and 1/2 tsp each of ginger and nutmeg. I skipped the mace because I don't have any (and if I'm being honest, I've never understood the difference between nutmeg and mace anyway). I was tempted to add some cloves because it felt like I should, but I also didn't want to deviate too much from the recipe, so no cloves. 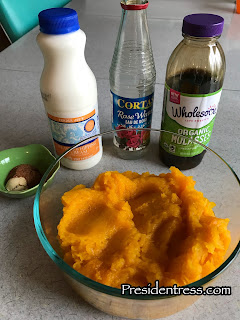 Then I mixed in 1/4 cup of molasses, then a pint of heavy cream, which seemed like a lot, but I trust the Mount Vernon people.

Then I poured it all into my crust. (A word on the crust: I did not make the crust that accompanies this pie on the Mount Vernon Facebook page. Making pie crust is already my most despised culinary task---despite my undying love of pie---and theirs seemed like too much work, even though it probably wasn't. The fact that I made crust at all is an accomplishment.)

Thanks to the molasses, at this point it looked and smelled more like a gingerbread pie than a pumpkin pie, but I'm not sure that's anything to complain about.

I was impressed that the pie did set up, although it was very soft.

Mr. Presidentressor and I wound up being the only ones to eat the pie. (The kids opted for cupcakes instead. Sometimes their intuition is good.) 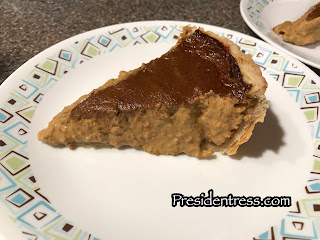 This pie is...different. The molasses was pretty overpowering, so it didn't even really taste like gingerbread---just molasses. There was absolutely no pumpkin flavor whatsoever, and also no rosewater flavor, which is probably for the best. It was also, as I mentioned, very soft and mushy, and sort of grainy. Whipped cream helped, and I'll admit that it sort of grew on me as I continued eating.

Even so, I probably won't make this again unless I need to bring a George Washington-themed dish to a party, but it was worth a try. I can definitely see how this would have been a big hit back in the 18th century, but today I'd probably take a cupcake instead. On the plus side, my crust was excellent!
Posted by Jen Presidentress at 4:33 PM