First Ladies' Séance in a Box 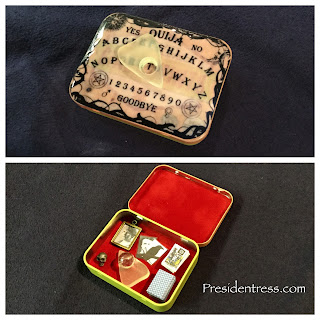 Several First Ladies have dabbled in the supernatural, perhaps none more than Florence Harding. In fact, one of the coolest objects I've seen at a presidential site was Florence's séance chair: high-backed and elaborately carved with celestial symbolism. That chair is in Marion, Ohio, but Florence's forays into the supernatural extended to Washington, D.C., as well.

Florence first met a woman named Madame Marcia Champney in 1920 while Warren Harding was seeking the Republican nomination. Madame Marcia was a well known fortuneteller in D.C., and in fact served as Edith Wilson's go-to astrologer. Madame Marcia was able to see that Warren had many affairs (but who wasn't, amirite?), and predicted that if he became president, he would die a sudden death before the end of his term. Despite this ominous forecast, Florence vowed that if Warren won, she would make Madame Marcia the official White House astrologer. As we know, Warren did win, and Florence continued to consult frequently, even obsessively, with Madame Marcia throughout his (brief) presidency.

Many other First Ladies held séances, referred to horoscopes, or believed in other supernatural phenomena. For example, Julia Tyler claimed to have ESP. Jane Pierce and Mary Todd Lincoln held séances to try to communicate with their dead children. Nancy Reagan famously consulted with astrologers in the White House. Hillary Clinton seemed to have taken the "First Lady Occult Club" to another level when she was rumored to have communicated with a long-dead Eleanor Roosevelt. (Upon clarification, it turned out that she just imagined what it would be like to talk to Eleanor, like asking WWERD?...which is something we should all be doing.)

Hillary and Eleanor might not have communicated with each other, but there was another supposed instance of First Ladies picking up vibes from one another: One night Edith Wilson went to bed with an ominous feeling. She awoke to newsboys spreading word of President Harding's death. Ooooo! Coincidence, or something supernatural?

Anyway...in honor of all of our spooky First Ladies and just in time for Halloween, I present a DIY Séance in a Box. Depending on what materials you use, it's actually really fast and easy to make. (Or it can be really complicated and take more than a week. It's up to you.)


My project was inspired by these instructions. That kit uses a very cool Ouija mint tin, but I didn't have one. What I did have was a lovely tin that had previously contained Trader Joe's Gingermints, so I decided to make that work. You could use any mint tin, really, but it probably helps if it's one with a flat top, rather than one with embossed writing or details. 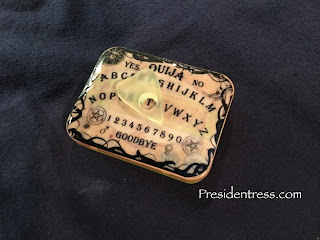 I searched for some Ouija board images and needed to go through a few before I found one with the right proportions for my tin. I just resized them in a document until I had one that worked, then printed it out on cardstock, trimmed it with scissors, and rounded the corners with a 1" corner punch. (But you can use scissors, too. Or leave them pointy. Whatever.)

I glued the board onto the lid with Tacky Glue, and then brushed on a coat of resin. Now, I realize not everyone has resin lying around. I love how it gave my board a hard, shiny finish, but obviously you can skip this step. I would recommend at least using some kind of top coat or varnish to seal it and give it a little more heft, but that's up to you. (If you want to give resin a try, though, it's really very easy and fun. I use Little Windows resin, but you can find other brands on Amazon or at your local craft store, too.)

The resin did make my board a bit translucent, so if you look carefully you can see some of the writing from the gingermint tin, but I think that gives it extra character. Next time I might add a basecoat or add an extra piece of paper or cardstock underneath, but I might not.

For the planchette, I used resin (colored with a bit of glow-in-the-dark paint) in a mold I got from Etsy. If you don't have resin, you could try forming a planchette out of polymer clay, or you could use a guitar pick like in that other tutorial I linked to. Or maybe carve one out of bone like they did in the old days. (I jest!) 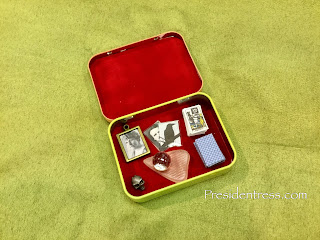 Instead of using real velvet to line my tin, I found some velvet-ish paper in the scrapbooking section of my craft store. It's very thin and more sturdy than fabric, so it was really easy to cut. Then I glued that into the tin with more tacky glue.

There are tons of printable tarot cards online, but I used ones from this site because it doesn't require a ton of paper (just one piece!) and because you can print a back to them! I printed that out on cardstock and spent about five minutes cutting out the tiny cards.

I tried making a crystal ball by gluing a marble to an overturned teacup charm, but I couldn't get anything to adhere to the marble, even after sanding it. So instead I have a "standalone" crystal ball, although I found that it fits nicely inside the planchette hole, so there's that. 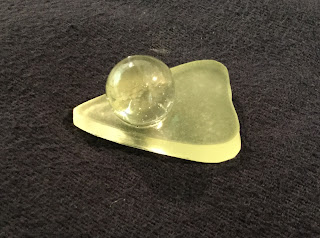 I also added a little skull charm for some extra creepiness (I cut off the charm-nubbin with wire cutters and filed the little bits down). 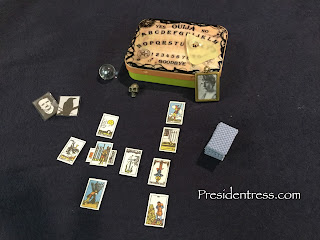 And of course, I needed a picture frame (another charm) to help commemorate the dead. (Yes, that's a tiny photo of Florence Harding. I also printed out Edgar Allan Poe and a raven, because of course.) The photos are just printed on regular paper and then sealed with some packing tape. They slide in and out of the top of the charm, so it's easy to change them depending on what you're going for.

I had planned on adding a candle, too, but decided against it when I realized my interest in fire safety outweighs my interest in necromancy. A birthday candle would fit just fine, but be careful when burning it.

You can add anything else you want: Throw in some tiny runes, a few little crystals, a miniature pendulum, whatever floats your ghost ship.

And there you have it: A portable supernatural kit for all your conjuring needs! (This would also be useful if you have an American Girl doll who starts to show an interest in the occult.)

If you make one of these, let me know how it goes. And tell Florence I say hello.
Posted by Jen Presidentress at 6:27 AM