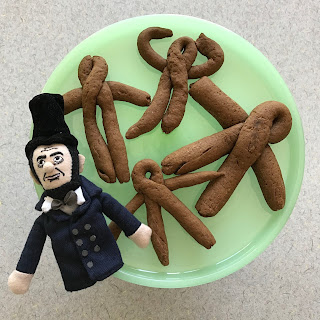 During one of the Lincoln-Douglas debates, Abraham Lincoln told a story about gingerbread men. When he was a child, his mother made some gingerbread men and gave three of them to Abe. He took them outside, where he ran into a neighbor boy. Being a generous person, Abe gave the boy one of the cookies. The boy shoved it in his mouth and immediately asked for another. Lincoln handed another cookie over to the boy, who said something about how no one ever loved gingerbread so much and got so little of it.

I first heard that story when I was a kid, when my dad read it to me from the classic children's book Abraham Lincoln by Ingri and Edgar Parin d'Aulaire. Ever since then, I've associated gingerbread men with Abraham Lincoln. (I mean, I don't solely associate them with him, but when I think of gingerbread men outside the context of Christmas, it's usually because of him).

So I decided that for Lincoln's birthday this year, I would make some gingerbread men--but not just any gingerbread men. These guys were going to be authentic.

See, whenever I'd envisioned this story, I imagined regular ol' gingerbread men, like the Christmas kind, but possibly without decorations. It wasn't until I read the book Abraham Lincoln in the Kitchen by Rae Katherine Eighmey that I realized Lincoln's childhood cookies were far different from the ones we think of today.

Ingredients, kitchen utensils, and "appliances" would have made it unlikely that Nancy Lincoln's cookies would resemble the flat, uniform cut-outs we think of today. She wouldn't have had an oven and cookie sheets; her baking would have been done in a Dutch oven over a fire. She likely didn't have something as superfluous as a man-shaped cookie cutter. She wouldn't have had baking soda.

So Eighmey, a cook and historian, used clues and research to create a recipe she thinks better resembles the cookies Lincoln would have had (although she does substitute baking soda for the pearl ash the Lincolns would have used, and adjusted the amount of ginger based on modern availability and storage methods).

When Lincoln recounted the story, he said that his mother used sorghum in the cookies. Eighmey thought this was unusual since most gingerbread recipes of the era called for molasses (as they do today). Eighmey's recipe calls for sorghum syrup or molasses, and although I really wanted to try it with the sorghum syrup, I was unable to locate any locally. So I used molasses.

Anyway, once the dough is made, you roll out snakes of it and form people like you might with Play-Doh. In a way this was preferable to the usual rolling-and-cutting method because I hate rolling dough flat. Also, my kids could easily help me without any fights over the cookie cutter. 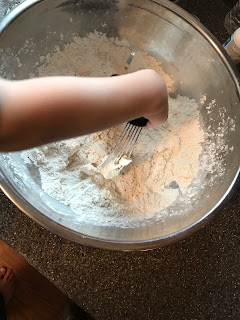 I'm going to paraphrase the instructions.

Pour the milk and syrup/molasses into a measuring cup and mix together.

Mix the dry ingredients in a bowl, then add the butter (in small pieces) and cut it into the flour mixture with forks or a pastry cutter. Then add the liquid and mix with a spoon or fork. I wound up stirring, then kneading it.

Take a golf-ball-sized piece of dough and work it into a long thin "snake," the circumference of a pencil and about a foot long. Break off a 4" piece and set it aside. Take the remaining piece and fold it in half, giving it a twist about an inch down. That forms the head and legs (sort of like a corn-husk doll, if you've ever made one of those). Then take the 4" strip and place it behind the "neck" to make arms. Pinch it down a little to secure it. 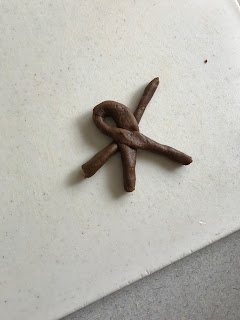 Bake at 325 for about 15 minutes. (I considered trying these in my Dutch oven but thought better of it.)

The recipe says it will make about 18 men, but we wound up with 24, probably because my 5-year-old, 8-year-old, and I aren't very good at measuring. 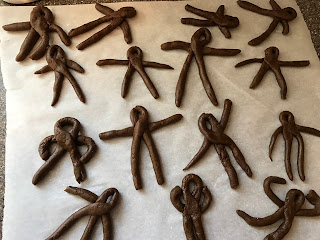 Are these the most gorgeous cookies you've ever seen? No. Are they the least? Quite possibly. I'm sure Mrs. Lincoln was far better at this. (Also, I'm not going to lie: There were several poop jokes made during the rolling-out process. Understandably.) 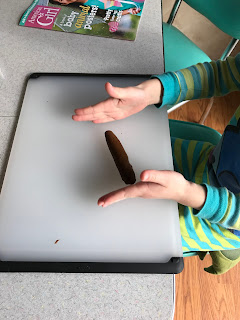 I worried that the cookie dough, being warm from all the handling, would spread into a giant mess in the oven, but they held their shapes beautifully and puffed more than they spread. 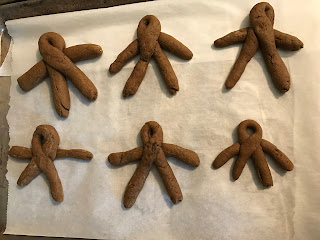 The final result was crispy on the outside, soft on the inside. They're not very sweet and not very gingery, but they're actually pretty good--almost refreshing. These won't replace my normal Christmastime gingerbread cookies, but I'd definitely make them again for Presidents Day or something.

Be sure to check out my other presidential gingerbread recipes: Dolley Madison's and Washington/Lafayette's. If you make any of them, let me know what you think.

Posted by Jen Presidentress at 10:14 AM

Email ThisBlogThis!Share to TwitterShare to FacebookShare to Pinterest
Labels: Cooking with the Presidents, Lincoln