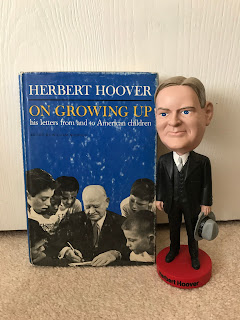 A couple months ago I was listening to the Herbert Hoover episode of the DC Improv's "Headliner of State" podcast, a search for the funniest president of all time. The guest on that particular episode was Tom Schwartz, director of the Herbert Hoover Library and Museum.

Through most of the interview, Hoover came off seeming like a good humored person, but not necessarily a humorous person. Toward the end of the interview, though, there emerged a glimmer of Hoover's funnier side.

Almost as an afterthought Schwartz mentioned this book of correspondence with children that Hoover had published after he retired. One of the letters asked if he thought a woman would ever be president. Hoover responded, "As a generalization, the men have not done too good a job of government in the world in the last forty-seven years, and the chances for the women are thereby increased."

In another letter a child asked if Hoover had traveled much as president. He answered,

Presidents must travel in order to learn what the people have in mind and to explain their policies.

However, travel has improved for Presidents. George Washington required five or six days to go with horses from New York to Washington. Presidents today can do it now in one hour by jet. But jets go over the heads of people--like some of the speeches.

I decided I needed a copy of this book, Herbert Hoover: On Growing Up.

As it happened, I had already been planning a trip to the Hoover Museum in West Branch, Iowa, because I needed to pick up the Hoover-themed 2016 White House Christmas Ornament, and why order it online when I can drive three hours to get it in person? I added the book to my shopping list.

A week or so later, my 5-year-old and I made the trip out to West Branch. Once we were done with the exhibits we headed to the gift shop where I eagerly perused the various books about Hoover, but I didn't see On Growing Up. I asked the woman working there if they have it, and not only did she say no, she seemed baffled that I'd even ask.

Maybe that's because when I looked it up on Amazon later that afternoon, I learned that On Growing Up was last printed in 1962. Luckily, though, I was able to snag a used copy in excellent condition for about $7 shipped.

When the book finally arrived, I was a bit underwhelmed. It's not a long book--around 150 pages, with a short letter or two on each page. However, it did serve as an interesting glimpse into Hoover's mind.

Most of these letters were sent and received well after Hoover had been president, so we're not talking about the Depression-era Hoover; we're talking about the Cold War-era Hoover. The letters serve as an excellent snapshot of America in the 1950s, especially with a chid's letter that actually uses both the words "golly" and "gee." Hoover talks a lot about Communism (specifically about avoiding it), but he also gets in some digs that show he was clearly still stinging from the way he was treated in re: the Depression.

It's not all politics, though. In fact, most of it isn't politics. One definitely gets the sense that Hoover felt wistful for his boyhood days, and stresses to children that they should focus more on having fun and getting a good education than on the problems of the world. While he sometimes comes across as "elder statesman imparting wisdom for the ages," he mostly comes across as "old guy next door who likes fishing." It's like this book could be titled Chicken Soup for the Cold War Child's Soul.

Although Hoover didn't have an easy childhood (he was orphaned at a young age and was sent to live with relatives on the other side of the country), he speaks with fondness about his early days in Iowa: sledding, doing chores on the farm, etc. We also learn some interesting random facts, like how his childhood idol was Abraham Lincoln.

In order to maintain the innocence of childhood, Hoover is vehemently opposed to children learning "Social Studies," although he does believe in the value of geography and learning about other presidents. In many letters, children ask about some pressing world issue, and Hoover basically tells them to go play baseball and leave the problems to adults. In some instances, though, he gives rather detailed answers.

An eighth-grader named Mary Lou asked for Hoover's opinions on military censorship, federal aid to education, and socialized medicine. Hoover responded that some amount of military censorship is necessary for national security; that the federal government should build schools in poor areas but should not pay teachers' salaries because once they get involved financially, eventually the federal government will tell local schools what to teach; and that socialism is bad and leads to dictatorships and a loss of freedom. Some debates never change.

Also, for a guy who thinks kids shouldn't worry about grown-up problems, he nonetheless (inadvertently, I'm sure) plants seeds of concerns, like with the kid who said, "Today the big problem is the Atom and Space." Hoover replied, "I do not agree that the whole problem today concerns the atom bomb and space. Those are only parts of a larger problem--the determination of the Communists to rule the world." I'm sure Linda slept a lot better after that.

As it turns out, the two examples cited in the podcast were probably the funniest responses Hoover gave, but there were some other decent ones. In one response, he talks about the time a professional autograph-hunter asked him for three autographs. When Hoover inquired why, he was told, "It takes two of yours to get one of Babe Ruth."

A girl named Kathleen writes that although most children want to be president, she wants to be a doctor. Hoover responds, "I am glad you want to be a doctor and not President. We do not have enough doctors, and there seems to be a sufficient number of candidates for President."

The funniest part of the book might have come from one of the children writing to Hoover. A boy named Michael addressed his letter to the "Walled Off Hotel." (Hoover spent his last years living at the Waldorf Astoria in New York.)

On Growing Up offers a unique and approachable look at Hoover's life in general, but it also gives a taste of a changing America. It's definitely worth a read for anyone interested in mid-20th-century politics and culture.


Posted by Jen Presidentress at 8:17 AM