Cooking with the Presidents: Washington/Lafayette Gingerbread 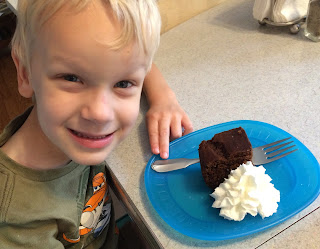 A few weeks ago I brought you a recipe for Dolley Madison's gingerbread. That bread was moist and aromatic, but not very gingery and kind of bland. I mentioned that I had two other presidential gingerbread recipes to try, so today I present the second one: a Washington/Lafayette delicacy. (Also, I'm realizing that I forgot what the third recipe is, so I'll need to look into that.)

My copy of The Presidents' Cookbook calls this "Martha Washington Gingerbread," which doesn't make sense because the accompanying story describes how George Washington's mom, Mary, made this for the Marquis de Lafayette when he visited her in 1784. I'm going to assume the title is a typo because it doesn't seem that Martha had anything to do with this one. (To confirm that this really is Mary's recipe we're dealing with, I found that Mount Vernon has a recipe for "Lafayette Gingerbread" that includes the orange zest Mary Washington used for Lafayette's treat.)

Anyway, the story in my cookbook says, "Legend has it that [Lafayette] was so impressed with the gingerbread and with Washington's mother in general that he explained, 'I have seen the only Roman matron of my day.' Some historians assume this was a compliment. From the rest of his comments we rather doubt it."

Then that's it. What!? What were the rest of his comments? What did he say about George Washington's mom? "I have seen the only Roman matron of my day. I came, I saw, I threw up in my mouth a little, am I right, guys?" I'll have to look it up.

The "recipe" included in my book says to take a gingerbread mix, but to add a teaspoon of instant coffee, a teaspoon of grated orange rind, and to use 1/2 c of orange juice in place of 1/2 c of water the mix will inevitably call for.

Sorry, but the same cookbook that expects me to butcher my own turtle wants me to use a boxed gingerbread mix? I don't think Mary Washington walked down to her local Ye Olde Grocery Store for a box of gingerbread mix, and she probably wasn't using Nescafé, either.

But the idea of using orange in gingerbread isn't new to me. For my daughter's second birthday she insisted on a "jujubed" cake (that's "gingerbread" for those of you not fluent in toddler) and at the time I had just gotten a fantastic book of bread machine recipes that included one for orange gingerbread. I made that recipe (in the oven, not the bread machine) and it was very good.

I decided to adapt that recipe rather than insult the memory of Lafayette and the Washingtons with a box of Betty Crocker. (In case anyone wants to know why I didn't just make the Mount Vernon recipe, it's because I didn't find it until my gingerbread was already in the oven. Also because their recipe is just an adaptation of someone else's anyway, since Mary's actual recipe seems to not exist.)

Without further ado, here is my recipe for
Washington/Lafayette Gingerbread

A couple notes here. The "recipe" from my Presidents' Cookbook said to use 1 tsp each of coffee and orange zest. I wound up with about 1 1/2 tsp of zest, so I used all of it, and I decided to increase the coffee by the same amount. Frankly, it seemed like a really small amount of coffee, even when
increased, but I went with it. I should note that the Mount Vernon recipe doesn't say anything about coffee, so go figure.

To make the bread:

Mix the dry ingredients in a bowl and set aside. Mix the wet ingredients in another bowl, then fold in the dry mixture. When combined, pour it into your cooking vessel and bake for about 40 minutes or until a toothpick comes out clean.

My copy of The Presidents' Cookbook says to serve the bread with applesauce or whipped cream. I opted for whipped cream because when given the choice between whipped cream and applesauce, who's going to pick applesauce? Mount Vernon's recipe suggests serving it with "fairy butter," which sounded delightful until I read that recipe: Basically you mix butter with sugar and orange-flower water (okay) and four hard-boiled egg yolks. I'll stick with the whipped cream.

So how did the Washington/Lafayette gingerbread taste? Amazing! My husband, kids, and I all gave it two thumbs up, and it's rare that we're all in agreement about a dessert. I gave some to our neighbors, and they texted me "Nailed it." (They had remained mum about the Dolley Madison gingerbread.) The bread is gingery and orangey...although I couldn't discern any coffee flavor at all, which wasn't a surprise. I think it would make more sense to either add more coffee or eliminate it all together. Since the Mount Vernon recipe doesn't include coffee, I'm inclined to simply remove it. I might play with it more in the future.
If you try it for yourself, let me know what you think in the comments here or on my Facebook page.

Posted by Jen Presidentress at 6:41 AM

Email ThisBlogThis!Share to TwitterShare to FacebookShare to Pinterest
Labels: Cooking with the Presidents, Lafayette, Washington