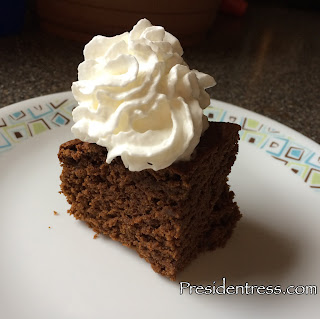 If you don't already know, I'm a huge fan of a cake Dolley Madison used to make (well, with a few modifications). I had a hankering for something sweet yesterday and decided it was time to try out another presidential recipe. I perused through my copy of The Presidents Cookbook and was reminded once again how dramatically eating habits and tastes have changed. I mean, no offense to James Buchanan, but I have no interest in eating "Calf's Head Dressed as Terrapin."

Thankfully the dessert options tend to be far more appetizing, and although several recipes piqued my interest, I was once again drawn back to Dolley Madison. (In fact, the Madison section of the cookbook has several sweet recipes I'd like to try, which got me wondering if that's the reason Hostess created the "Dolly Madison Bakery" brand. In three minutes of googling, the best history I could find indicates that the bakery wanted to suggest their products were good enough to be served at the White House, but it doesn't specify why Dolly/Dolley in particular was chosen.)

Anyway, the recipe I decided to tackle was her gingerbread. According to the description, Dolley referred to it as the "Jefferson gingerbread," and she gave the recipe to Martha Washington to preserve, so this gingerbread's significance seems to span several presidents. Other First Ladies have used the same recipe, and apparently one chef made it for the Eisenhowers. I figured it must be good.

I didn't really make any modifications to this recipe, so here it is:

Before I get into the instructions, let's talk for a moment about this beef dripping/lard issue. I don't have any beef drippings on hand, nor have I ever. I do have lard (don't judge---I use it for making tortillas). I wasn't thrilled with the idea of dumping a bunch of lard into a dessert and considered substituting butter, but ultimately I decided to be "authentic" and go with the lard. 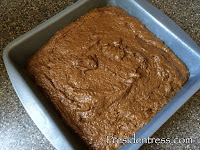 All right, so start by preheating the oven to 350, then mix the flour, ginger, and cinnamon in a bowl.

In another bowl, mix the molasses with your drippings or lard or whatever fat you're using.

Dissolve the baking soda in 1/4 c. hot water and add it to the molasses/fat.

Heat the remaining 3/4 c. water until it's almost boiling. Alternate adding the water and flour mixture to the molasses mixture, and stir until combined.

Pour into a greased baking dish (I used a 9 x 9 square) and bake about 30 minutes. You'll know it's done when a toothpick comes out clean. Or just by smell. Seriously, you'll know. (My cookbook joked that you should make this in the winter with the windows closed, because if you bake it with the windows open the whole neighborhood will come over. I was like, "Yeah, right," but really...my house never smelled so amazing.)

It wasn't until I was already mixing the ingredients that I noticed the recipe calls for no sugar. (It actually does call for a dusting of powdered sugar for serving, but there's none in the recipe.) I checked another gingerbread recipe in the book and it didn't include sugar either, so...hey, whatever.

This gingerbread was extremely moist, although surprisingly not very gingery. The predominant flavor was molasses, which isn't a bad thing, just not what I was expecting. I didn't bother telling my sugar-loving family that there was no sugar in the recipe, and they didn't complain (although the dollop of whipped cream on top probably helped). 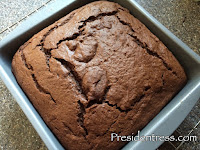 If I were to make this again I'd likely go a little lighter on the molasses, a little heavier on the ginger, and I'd add a bit of salt to help bring out the flavors.

I have at least two more presidential gingerbread recipes I want to try, so stay tuned. We'll see how they stack up.

Posted by Jen Presidentress at 6:34 AM

Email ThisBlogThis!Share to TwitterShare to FacebookShare to Pinterest
Labels: Cooking with the Presidents, Madison