Cooking with the Presidents: Tilden Cake 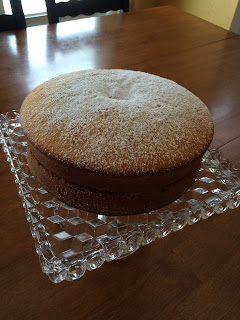 My mom's birthday, Valentine's Day, and Presidents Day Eve all coincided this year, so we had a multifaceted celebration. I've been craving James/Dolley Madison Cake, but I'm pretty sure I made that last year, so it was time to try something new.

After perusing the internet and my ancient Presidents' Cookbook, I settled on Tilden Cake, found in the Rutherford B. Hayes section of my cookbook.

Samuel Tilden wasn't a president, of course, though he could have been---and some would argue should have been. Tilden and Hayes ran against each other in the election of 1876. Tilden won the majority of the popular vote, but the electoral votes in four states were disputed. That threw the outcome to Congress, and led to the famous/infamous Compromise of 1877. Essentially Hayes was named the winner of the election in return for an end to Reconstruction in the south.

Anyway, I didn't choose this cake due to any particular fondness for Tilden or Hayes. Instead I chose it because it sounded good: lemony!

(The recipe didn't say to, but I brought all the cold ingredients to room temperature first)

Cream the butter and sugar, then slowly add the eggs one at a time.

Set aside, and sift the flour, cornstarch, baking powder, and salt.

Add the flour mixture to the butter/sugar/egg mixture, alternating with the milk.

Pour into the cake pans and bake until done, about 30-35 minutes

The cakes wound up smelling wonderful, although they felt pretty dense.

While they were cooling, I googled and found other recipes and references to Tilden cake. Apparently there was a popular cookbook called The Buckeye Cookbook (also known as Buckeye Cookery and Practical Housekeeping) that included recipes for Tilden and Hayes cakes. Women weren't allowed to vote, but they could bake cakes in support of their candidate. (They could also bake in support of particular causes. Apparently the book also includes recipes for "Hard Money Cake" that incorporates "silver" and "gold" batter depending on what metal/metals women wanted backing their currency.) This is an interesting post I found about the history of election cakes.

It appears that the Hayes and Tilden cakes were very similar. Both were flavored with lemon but had slightly different amounts/types of other ingredients. The Tilden cake from the Buckeye book is identical to the one from The Presidents' Cookbook except that the Buckeye recipe calls for pulverized sugar (powdered/confectioners) whereas the recipe I used just said "sugar."

This version of the recipe calls for beating the egg whites separately and then folding them in, which would certainly result in a lighter cake.

In the end, consistency didn't matter much because the cake tasted wonderful, regardless. I spread some lemon curd between the two layers and topped the whole thing with a dusting of powdered sugar. My mom and kids loved it, and even Mr. Presidentressor, who typically doesn't like desserts that aren't chocolate, devoured his slice.

Tilden might not have lost, but his cake was a winner.
Posted by Jen Presidentress at 6:56 AM

Email ThisBlogThis!Share to TwitterShare to FacebookShare to Pinterest
Labels: Cooking with the Presidents, Hayes