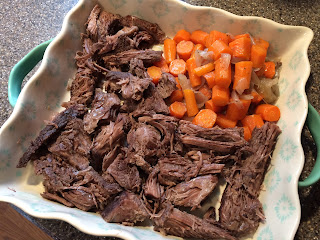 I posted the other day about the Tilden Cake I made for our Presidents Day Eve/Valentines/My Mom's Birthday celebration. Before we dug into the cake, though, we needed a meal, and since it was Presidents Day and all, I wanted something presidential. Unfortunately, most of the recipes I have are gross. Lots of fish and turtle and stuff.

One of the few appetizing recipes I could find was Thomas Jefferson's Beef a la Mode from The Presidents' Own White House Cookbook, given to me by my aunt.. ("A la mode" in this case meaning "in fashion," not "topped with ice cream.")

Now, my mom is a huge fan of Alexander Hamilton (and has been forever---long before the Hamilton musical became the hottest thing since Hercules Mulligan's pants), ergo she hates Thomas Jefferson. Like, despises him. So her birthday celebration took an ironic turn. (Still, one has to agree that Jefferson's Beef a la Mode is a better option than Zachary Taylor's Coon-and-Squirrel Deep Dish Pie, which is a real recipe from The Presidents' Cookbook.)

Take four strips of bacon and use them to line the bottom of a Dutch oven.

Next, you're supposed to trim off (but reserve) the fat from the pot roast. Then you mix together the next six ingredients and roll the reserved fat and 4 strips of bacon in it. Now, my pot roast didn't have much fat on it, so there wasn't really anything to remove (at least not without deconstructing the whole thing.) Therefore I rolled the bacon, but no fat, in the mixture.

When you're done rolling your bacon and fat, it's time to lard your meat. I'll admit I didn't actually know what it meant to "lard" my meat. I assumed it meant wrapping the meat with stuff, so that's what I did: I draped the mixture-encrusted bacon on the beef. (More on this momentarily.)

The next step says to lay 4 or 5 more strips of bacon on the meat, which seemed redundant since I'd just done that, but fine: more bacon! Then set the whole thing in the Dutch oven.

Then you cut the onions and carrots and throw them in. Instead of three small onions, I used one large one. I also used six carrots because I love carrots. I added the onions at the beginning, but I waited until the last hour of cooking to add the carrots because otherwise they'd get too mushy, in my opinion.

Add the rest of the ingredients over top, and simmer gently for three hours.

When it's done, strain the liquid through a sieve, and serve.


Let's get back to this larding issue. Once I had my pot roast simmering, I sat down and googled "larding." (Someday I'll learn to research stuff before I start making recipes.) It turns out that larding is the process of adding extra fat to meat using special larding needles, or by making strategic slices and shoving stuff in. The end result is a more tender meat since it has all that extra fat in it. Clearly that's a bit more involved than what I had imagined, and clearly it's not what I had done. Oh well.

The end result was a quite tasty pot roast. The brandy, wine, and bacon made for a savory sauce, and the carrots were perfectly cooked after their mere hour in there. The meat, though, was a bit dry. I probably should have larded it.

No one seemed to mind much, though. My kids ate their meal without complaining, and not just because they knew there was cake waiting.

Posted by Jen Presidentress at 7:27 AM

Email ThisBlogThis!Share to TwitterShare to FacebookShare to Pinterest
Labels: Cooking with the Presidents, Jefferson