When I was 10, my dad and I drove from Chicago to Disney World. Along the way we made several stops, including Springfield, Illinois, to see Lincoln's tomb. My dad had been there before, but it was new to me, so I was surprised when I saw the bust outside Lincoln's tomb. It looked like any old statue, really, except that the nose was bright and shiny. My dad explained that people rubbed the nose for good luck, so I did, too. 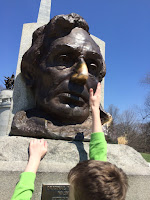 It's unclear how the practice got started. It seems that rubbing statues' noses in general is considered good luck, and Lincoln is a popular guy. It does seem a bit weird, though, as Lincoln wasn't exactly the luckiest guy in the world. Yeah, he won the Civil War (the bloody, devastating Civil War), but he also lost his mother at a young age, buried two children, and, you know, got assassinated, hence the bust outside his tomb.

But whatever. I find it a delightful, if strange, tradition.

This morning my 6-year-old asked me if Lincoln had a shiny nose in real life. (I told her probably not.) She knows all about the nose because we've been to Lincoln's tomb a couple times, and because we live in Illinois where tributes to Lincoln are as common as Starbucks. Many of those Tributes come in statue or plaque form, and if the nose is accessible, it will be rubbed.

We encountered this plaque at a state park nowhere near Springfield a few months ago. You can see that the nose is significantly shinier than the rest of it. 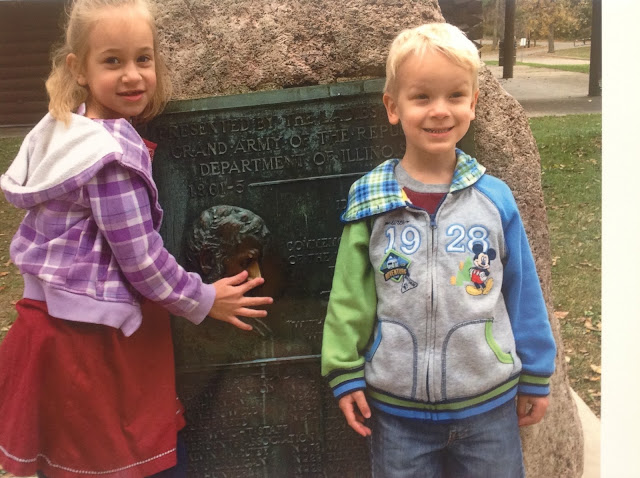 You should never pass up an opportunity to rub Lincoln's nose. Or should you?

Apparently not everyone is happy about the tradition. An angry columnist from Springfield's newspaper is mad that people are leaving pennies at the statue and the tomb. He, and a cemetery worker, find it "tacky." In my four visits there I've never seen any pennies, so maybe it was a short-lived fad (the column is from 2013). But leaving coins on graves---any grave, not just Lincoln's---is something people do, isn't it? This columnist is also up in arms about people rubbing the nose, because apparently you aren't supposed to.

Then I felt bad. Have we been defacing Lincoln's face? Should we stop? So I looked for some warnings online, because there certainly aren't any at the tomb itself. The website for the Lincoln Tomb Monument Association has no warning against rubbing Abe's nose. The Lincoln's Tomb page at Oak Ridge Cemetery's website makes no mention of keeping one's hands off. In fact, the first image on the cemetery's home page is a photo of a person rubbing Lincoln's nose. It doesn't exactly seem like anyone's trying to discourage the rubbing, except Mr. Angry Springfieldian.

I did find some information about how in the 1970s the Illinois State Historical Society worried that the constant rubbing would erode Abe's nose, so they raised the bronze bust to make it harder to reach. Frustrated schoolchildren wrote letters of complaint, and the bust was restored to its regular height shortly thereafter. And apparently today, caretakers have a stepstool available for kids (or short adults) who need a boost to reach the nose. If they're trying to keep people's hands off, they're not doing a very good job communicating it.

I would hope that if the bust truly is in danger of being destroyed, they'll put it off-limits for good. Maybe they can use those pesky pennies and $5 bills being left at the tomb to help fund something.

So, until I'm told otherwise I'll keep rubbing Lincoln's nose whenever I see one. It might not bring me luck, but it brings me a little happiness.
Posted by Jen Presidentress at 9:18 AM