Happy Groundhog Day, everyone! As with many things, I say that un-ironically. I love Groundhog Day! I even woke up at 5:45 this morning to attend my local groundhog prognostication. (Woodstock Willie says early spring!)

Needless to say, I was overjoyed a few months ago when I came across this t-shirt combining two of my favorite things: marmots and presidents!


The Roosevelt in question is Franklin D., and this was a logo created for a button during his 1932 campaign.

Naturally I was curious about these Virginia Groundhogs. I mean, what? I assumed it was some sort of fraternal organization, and that appears to be the case. The group was officially known as the "Ground Hog Club of America," but seems to have existed exclusively in Roanoke, Virginia, at least as far as I've been able to find.

Here's a photo of one of their meetings from Groundhog Day, 1926:


You can see the organization consists entirely of white men (with the exception of the white boy in the front row), which isn't surprising for a fraternal organization in 1926. The "African American" standing in the middle is actually a white man in blackface. So, that happened...

There's not a lot about the Ground Hogs on the web. An old newspaper mentions something about a wedding between two groundhogs (I think actual groundhogs, not members of the organization) in 1921. The group seems to have been active from the 1920s until their meeting hall burned down in 1957. They met again in 1962, but I don't know how long the organization survived after that.

Here's the shirt in action at today's groundhog festivities in Woodstock, Illinois, filming location for the Groundhog Day movie. 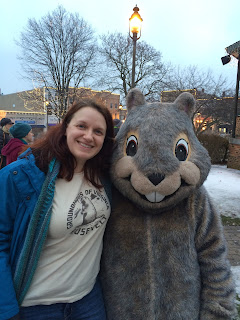 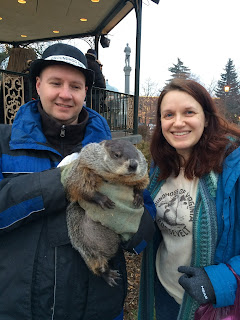 In other presidential-groundhog news, last night I was reading the book Groundhog Weather School to my 6-year-old (fantastic book, by the way), and in the section about famous groundhogs, we learned about Buckeye Chuck, Ohio's official groundhog. Where does Buckeye Chuck live? Marion, Ohio, home and burial site of Warren G. Harding! I might need to take a road trip next February...

Posted by Jen Presidentress at 7:01 AM

Email ThisBlogThis!Share to TwitterShare to FacebookShare to Pinterest
Labels: FDR