I just got back from a brief but extremely fun weekend with my best friend in Baltimore and Washington, D.C. You might remember Becky from our whirlwind Hamilton-and-more tour of New York City, and our good time at the Millard Fillmore Presidential Library.

Anyway, Becky lives in Baltimore and has been bugging me to visit for years. Finally the stars aligned, and I'm really glad they did.

My first full day there was spent in Washington, D.C. Did we see the usual tourist attractions? The White House? Lincoln Memorial? Washington Monument?

No, of course not. In part, that's because I've been to most of the usual places already (though it's been a couple decades), but mostly it's because my tastes run a little different.

My day in D.C. happened to be Groundhog Day, which is one of my (and Becky's) favorite holidays. (I wrote before about a presidential-type groundhog celebration.) I'd learned there would be a Groundhog Day event in Dupont Circle, so we made sure to get up well before the crack of dawn to get there in time.

When we arrived, we saw the taxidermied Potomac Phil looking a little angry, surrounded by a couple people in top hats with signs saying things like "Make Groundhog Day Great Again." A guy in a top hat approached us and asked if we were staying for the prediction. When we said we were, he asked if we wanted to borrow top hats to wear. The catch: We'd have to stand up on the steps by the groundhog. Yes, please! 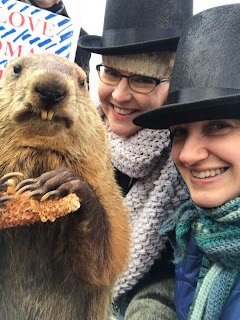 As it turns out, we wound up standing right next to Potomac Phil during the prognostication, which was captured by a couple D.C. TV stations. (Video here. I'm the freak with the amazing purse and the groundhog puppet.) 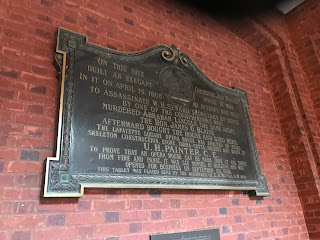 Still on a high from our brush with fame, we headed over to the Federal Court of Claims to find the Seward Plaque. If you've read Sarah Vowell's Assassination Vacation, you might remember her talking about the plaque, and her story pretty funny. The plaque itself, though, isn't actually humorous at all. Rather, it marks a violent piece of U.S. history, which you can learn about in the Facebook Live video I made while there.

(About ten seconds into the video, a guy in a long black coat started approaching the plaque. I could only see him out of the corner of my eye, but he totally distracted me. Was he, too, a tourist intent on seeing the Seward Plaque? Was he federal law enforcement there to ask me WTF I was doing? I'm still not sure, but I didn't get arrested so I suppose it doesn't matter.) 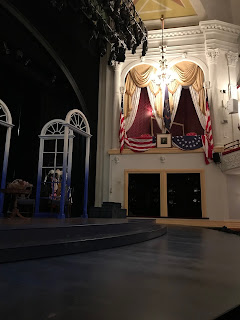 We then went to Ford's Theater. We could take a tour of the theater right away, or we could wait a while and do the theater and the museum. I would have liked to see the museum, but we opted for the theater-only tour since we had a packed day.

We walked around the theater for a few minutes, and then a ranger gave a brief talk about the night of the assassination. I didn't really learn anything new from the talk, but the one thing I did learn from the tour is that Lincoln's box was to the right of the stage (as you're looking at it). For some reason, I had always envisioned it to the left, and this reality completely threw me off.

Next on our list was lunch at Wok and Roll, a Chinese restaurant now occupying the boarding house where the Lincoln assassins conspired. On the way, we picked up my old friend Jarrod, who works at the Capitol One Arena, which is practically across the street from the restaurant/evil boarding house.

I tried hard to imagine John Wilkes Booth, Lewis Powell, and George Atzerodt hanging around, plotting against the government, but it was hard to get the sushi bar out of my mind. 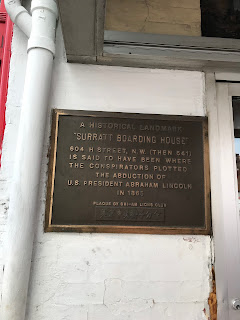 After lunch, we said goodbye to Jarrod and walked a few blocks to the site of James Garfield's assassination. He was killed at a train station at the corner of 6th and Constitution Ave. NW, where the National Gallery of Art now sits. I don't know exactly where in that general area it happened because there's no plaque marking the event.

A few days before I left on my trip, the James Garfield National Historic Site tweeted about their desire to see a plaque marking the spot, so I thought I'd help out by demonstrating the crucial need for one.


We then walked a few more blocks to the National Museum of American History, which is probably as close as I can get to heaven on earth. So many things! 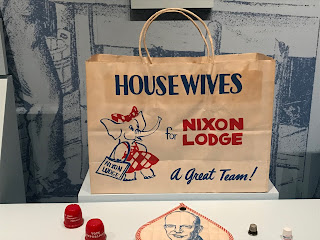 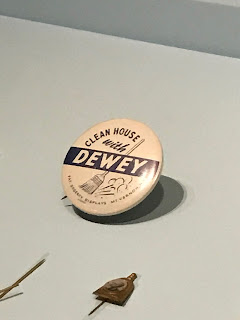 By the time we were done with the museum, we were extremely tired and our feet hurt. It was also bitterly cold outside. But we had more to do!

We hopped in an Uber and headed over toward the East City Bookshop, where we were attending a book signing later that evening. First, though, we had dinner at a place called Mr. Henry's, which had a nice turn-of-the-century feel, with lots of Gibson-Girl-esque pictures and dark wood. We also did some of the Presidential Mad Libs I'd bought at the history museum.

Then we walked over to the bookstore for the presentation and book signing by J.D. and Kate Dobson. (You can---nay, should---read my review of their book Hottest Heads of State here.) The presentation was hilarious, and J.D. and Kate are sweet, fun, amazing people. Plus, people in the audience got an "autographed" photo of a president if they asked a question during the Q&A portion, and Kate made sure I got Warren G.