Presidentress has been quiet lately, mainly because I've just been busy with stuff and partly because I've been unmotivated. I have a whole list of ideas for presidential blog posts, and I'm in the middle of reading a book I plan to review, but I've fallen into a sort of presidential malaise, which Jimmy Carter would appreciate.

Well, what better way to get amped up again than a whirlwind presidential trip to New York City?

The trip wasn't exactly planned as a presidential thing. Instead it was planned a girls' getaway weekend with my BFF from high school. Our only set-in-stone activities were a Broadway show and a tour at the Tenement Museum (I highly recommend). But then I got in touch with a family friend, a native New Yorker who knows everything about the city and who offered to customize a tour for us. Not all of it was presidential or even tangentially presidential---there was some music, literature, baseball, and Robber Barons thrown in---but it was more than enough for a blog post.

It also involved 21 miles of walking over the course of two days, so we covered a lot of ground.

No, that's not the Broadway show we saw. Neither of us wanted to mortgage our houses to pay for tickets. But we did the next-best things. (And let's not nitpick over the fact that he wasn't technically a president.) 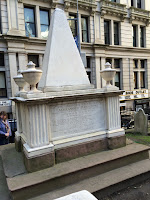 First we went to Alexander Hamilton's grave at Trinity Church. Angelica, Eliza, and Phillip are there, too. (So is Robert Fulton of steamboat fame.) My New Yorker friend said before the Broadway musical hardly anyone visited that cemetery, but now the place is crazy busy. At least three giant tour groups plus dozens of stragglers swarmed through in the half hour we were there.

Just a couple blocks away is Federal Hall, where George Washington was inaugurated as the first president. It also served as the capitol building during the short time the government was based in New York.

The building that stands today was actually constructed in the 1840s after the original was razed in 1812, but it contains a piece of the ground on which Washington stood, the railing he stood behind, and the Bible he used when being sworn into office. 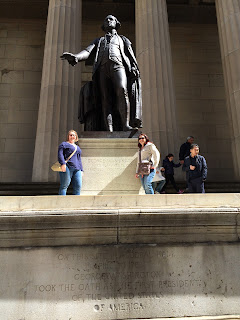 Just a couple blocks from Federal Hall is Fraunces Tavern, which was an important hangout before and during the Revolution (some scenes from the Hamilton musical are set there). Prior to the 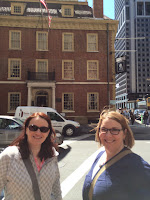 Revolution, the Sons of Liberty met at the tavern, and they even staged a pre-Boston-Tea-Party tea party when they forced a British naval captain to apologize for bringing tea into New York. The tavern served as one of Washington's headquarters during the war, and it's where he gave his farewell speech to his officers once the war was over. It also served briefly as a government building before the offices moved to Federal Hall and the tavern turned into a tavern again.

A museum on the second and third floors contains relics and information about the role the tavern played before, during, and after the Revolution. (No photos allowed.) The tavern still serves as a restaurant---and a nice-looking one at that---but we didn't eat there because we had other plans.

On our way to lunch we passed by the Wall Street bull. Remember how I wrote about people rubbing Abraham Lincoln's nose for good luck? Apparently people do the same thing with the bull's balls. (I just missed getting a photo of a woman licking them.) 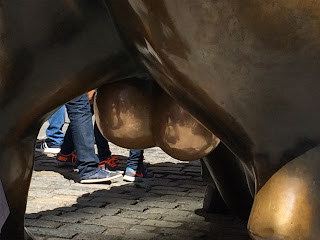 But back to Hamilton. On the second day of our trip, we took a train to the Hamilton Grange National 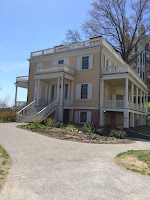 Memorial, the house where "the Hamiltons move[d] uptown." Honestly, until I started planning this trip I had no idea that Alexander Hamilton's house still existed, nor had I actually given it any thought. I imagine this place has also enjoyed a tremendous boost from the popularity of the musical.

The house has been moved (twice) a short distance from its original location, but it's in the same general area and even today it has more of a pastoral feel than downtown Manhattan. I mean, it's clearly a city, but it's definitely "quiet uptown" and was probably even more so back then. You can see why it would appeal to someone trying to escape the bustle.

The lower level of the house is a small museum dedicated to Hamilton. The upstairs has a few rooms decorated in period furnishings. It's not a grand house or an extensive museum---we were done within half an hour, probably---but it's worth a a trip to see it.

A short cab ride took us to the Morris-Jumel Mansion, the yang to Hamilton's yin. This house was 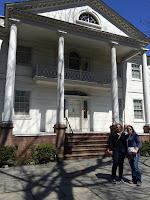 built in 1765, but the owner was forced to abandon it during the Revolution. The house served asWashington's headquarters for a while, then it later served as British headquarters before eventually being taken over by the new U.S. government. In 1810 a guy named Stephen Jumel purchased it. His wife, Eliza, wound up becoming rich by dealing in real estate, which was almost unheard of back then.

When Stephen died, Eliza married...wait for it...Aaron Burr! When they got married Eliza's property automatically transferred to Burr's ownership and he didn't waste much time before starting to sell off her belongings because that's the kind of guy he was.

So in this one house, we have George Washington's war room just a few steps from Aaron Burr's bedroom. History is so incestuous.


We took a self-guided tour of this house like we had with Hamilton's. When we got there, one of the docents rushed us into the octagonal living room to take a quick look before it was closed off for a yoga class. My BFF and I agreed that it would be pretty damn cool to take a yoga class in Aaron Burr's house, but we weren't dressed for it and our bodies hurt from all the walking. I wanted to go back later in the evening for their paranormal event (my New Yorker friend says that the house is considered quite haunted), but it didn't fit in with our plans.

Just across the street from Burr's house is the stairway that used to lead from Coogan's Bluff down to
the Polo Grounds where the New York Giants played before moving to San Francisco. Besides the staircase, there's really nothing left of the Polo Grounds. We walked over a bridge to the site of the new (and the few remains of the old) Yankee Stadium. It was a long bridge, but I had no idea Yankee Stadium was so close to the Polo Grounds. (I could find ways to connect this to presidents, but that will probably have to wait until I begin my "Presidents and Baseball" series, which should be coming...someday.) 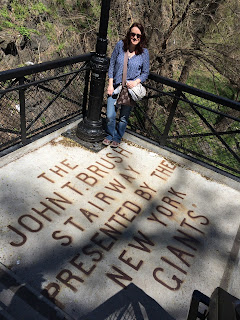 Stay tuned for my next post, which is dedicated to random presidents and other such people.

Also, if you haven't already bought it, make sure you get your copy of the "Hamiltome," the book about the musical. It has all the annotated lyrics plus tons of background info. Available at Amazon!
Posted by Jen Presidentress at 5:55 AM