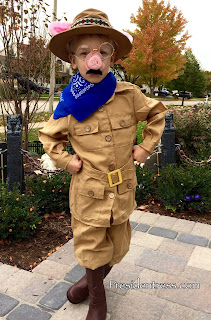 I tried finding a good presidential Halloween costume this year, but I came up short. You'd think with it being an election year there would be tons of options, but I just wasn't feeling any of them. I considered dressing up as Sexy Abraham Lincoln again and recruiting friends to go as Sexy Jefferson, Sexy TR, and Sexy Washington so we could collectively go as Sexy Mount Rushmore, but surprisingly few friends (read: none) wanted to join me. Their loss.

It's okay, though. The strange-presidential-costume theme continues in the Presidentress household thanks to my 5-year-old son insisting on being Teddy Roosepig.

I need to state here, emphatically, that this was not my idea. I'm not sure if I'm giving him all the credit or all the blame; I'm just saying.

It started when I showed my kids the Teddy Roosevelt costume I found on Amazon. They all rebuffed me, so I let it go. But then a few weeks later, my youngest came up with this pig thing and decided that he needed to morph it with Teddy Roosevelt. 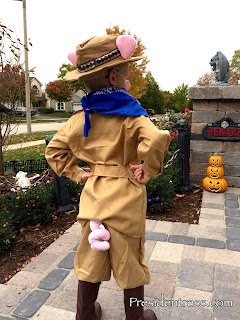 At first I thought it would be disrespectful (unlike that classy Lincoln costume of mine), but I asked on Facebook and Twitter, and everyone who responded said that it was a great idea. A couple even said that Teddy himself would find it hilarious. So it happened.

I bought the costume from Amazon, but when it came I saw that it didn't include the boots. So I found some kids costume boots on Amazon, too. (When I bought them, they were $10 with free Prime Shipping. They've gone up since then, which is unfortunate because you could buy some real kids' cowboy boots for the current price, I imagine.) Then I found a "pig kit" with a nose, clip-on tail, and ear headband.

Because of my affinity for aardvarks, I know that the word "aardvark" comes from the Afrikaans (South African Dutch) words for land (aard) and pig (vark). Hence this costume should really be called Teddy Roosevark. Plus Roosevelt is a Dutch name, so it's even more appropriate. ("Roosevelt" apparently means "rose field," so Roosevark would, I suppose, mean rose-pig, and pigs are pink, after all. It's perfect.)

Maybe I'll reuse my Lincoln costume from last year so my kid and I can comprise half of a very dystopian Mount Rushmore this Halloween. 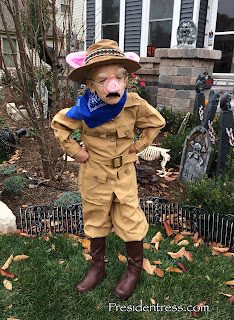 Posted by Jen Presidentress at 1:27 PM