Don't Blame Me. I Voted for Kodos 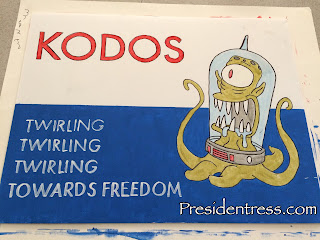 A while back I stumbled upon some election signs reddit user potmat had created for his yard. They're signs featuring Kang and Kodos, the aliens who make an appearance in every "Treehouse of Terror" episode, including one in which they impersonate Bill Clinton and Bob Dole in an attempt to win the 1996 election and take over the earth.

Obsessed with the idea of having these signs in my yard, I asked potmat if he was okay with my stealing the idea, and he said sure. So I sent the picture to my friend Heather and asked her to create a file with quality high enough for a yard sign. She did, and then I let it sit in my inbox for several months.

Finally the other day I sent the files to Office Max to be printed on heavy poster paper, which I then planned to glue onto an existing yard sign. Unfortunately, I guess someone at Office Max knows The Simpsons well enough to know that Kang and Kodos are, technically, copyrighted characters, and they wouldn't print them.

I resigned myself to not having awesome election signs.

Then, yesterday afternoon, inspiration struck: I could just paint them myself! But then I flashed back to junior high art class and having to make a grid over a comic strip and a grid on poster board, and having to freehand each part of the grid onto its corresponding square and how deathly boring that was, and I gave up. But then my brain remembered that I have a portable projector I use for showing videos in some classes I teach, and I realized I could use that to project the image onto a blank yard sign and trace it. Of course there would also be a lot of painting (and more and more tracing) involved, but at least I'd have my signs. 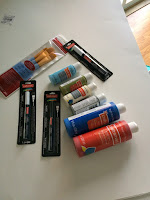 I hit the craft store (with lots of coupons, thankfully) for some acrylic paint, some paint pens, and some sealer. Mr. Presidentressor had already purchased a blank sign, probably at some man-store. (Sarcasm, people. I know women like Home Depot, too.) (Except I really don't. I always worry that one of those giant saws or a coil of wire balanced on a high shelf is going to fall on me.)

I set up the projector, hooked it up to my phone, and taped my blank sign to the wall. My 7-year-old "helped" me by talking incessantly about my tracing (which I did in pencil, by the way). I did Kang on one side, Kodos on the other.

Next I headed to the kitchen table and outlined the aliens in Sharpie. I wound up painting over Kang's name because the pencil showed through the paint and I figured it would be easier to go over them in white paint than to try painting around the blank parts with red. 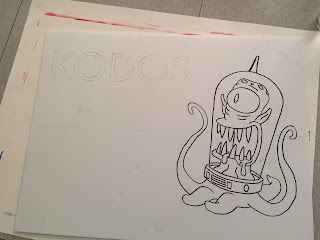 Then we painted the red and blue background on the first side. I wasn't happy with how splotchy the paint looked at first, but a second coat of each made them better. Filling in the alien was actually lots of fun, although I did need to go back over some of the lines with Sharpie again once the paint had dried, just to keep them bold. 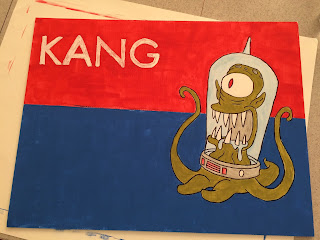 For the Kodos side, I decided to change up the color scheme. Instead of blue on top and red on the bottom, I left it white on top and went with blue on the bottom. That was partially because I'm impatient, and not painting something is quicker than painting it. But it's also because the white paint pen I got for doing the large letters wasn't working very well and I didn't want to deal with it anymore. As for the blue, it just covered better than the red.

From the beginning I had planned on going back and doing the smaller lettering at the end, I just wasn't sure how. I didn't want to freehand it, but I also didn't want to project it up against a wall, especially because I wasn't sure if the paint pens would even work that way. Ultimately, I wound up using the projector, but I rigged it (with a step stool and my kitchen table) to project down onto the floor. 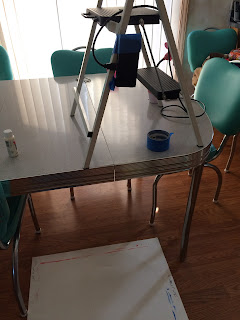 When it was all done, I added a few coats of varnish. Unfortunately, there were a few places where the varnish (or more likely my brush) took off a bit of the acrylic paint, most notably on Kodos. Oops. Overall I'm happy with the results. It wound up costing less than getting the signs printed (although it also cost me about six hours of my life). 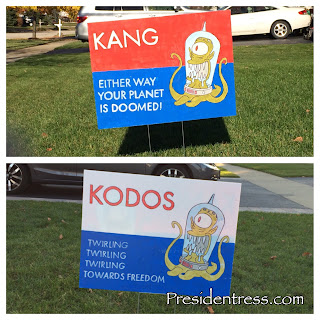 Since I wound up doing these on my own, I could have customized them to be different (or more different) than the ones the reddit user created. And had I started sooner than 72 hours before the election, I probably would have. (Heather pointed out that both aliens are Kodos---I could have used a different image for Kang.) Luckily we have four years before we have to go through this again, so I've got time to work on the next one.
Posted by Jen Presidentress at 2:37 PM