During the school year, my 7-year-old daughter's favorite pastime was writing and illustrating stories. Sadly, she hadn't written a single thing this summer, so the other night I asked her to make me a book. The next morning, she presented me with a gift: an original story entitled "Aborham Lincon Meets Teddy Roseavelt." [sic] 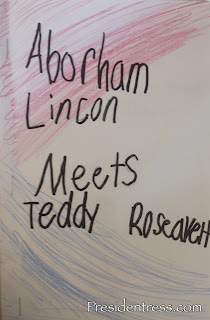 In the story, Abraham Lincoln is illustrated as a ham, and Teddy Roosevelt is illustrated as a teddy bear. One would think her inspiration for the ham came from the series of paintings of presidents holding hams, but no! It was purely coincidental. In fact, she surprised me with the book mere seconds after I discovered the president/ham artwork. I consider it fate.

I thought the world would like to read her story, so I've transcribed it here. I've fixed spelling and added quotation marks and some other punctuation, but everything else (including the illustrations) is original.

"Oh! Hi! I am Abraham Lincoln. What is your name?"
"Oh! Abraham! I found you a new friend," said George Washington.


"Hi! I am Teddy Roosevelt! Are you Abracon Lincoln or something?"
"No, I am Abraham Lincoln!"
"Oh! Well hi!" 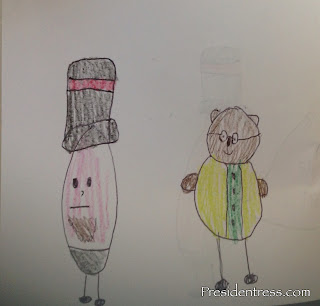 "So what do you want to do?" asked Teddy.
"What about catch?" said Albert. Albert was a very annoying bird. Never mind about him. 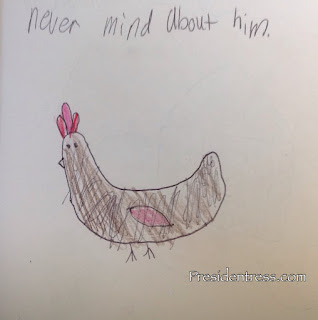 "Do you want to pretend we are hamsters?"
"Oh, do they sell ham there?"
"No, silly," said Abraham Lincoln.


Then the friends went to George's house for dinner. They first had chicken instead of ham, and pie for dessert. After dinner they went out to play catch. At last it was time to go home. They had so much fun together.

I'm not entirely sure, but I suspect the chicken they ate was Albert, the annoying bird. What do you think?
Posted by Jen Presidentress at 6:30 AM