Today I bring you a review of two books that recount important events in American history using Legos. Since "Lego" is a registered trademark, the artist/author of the books uses the generic term "brick," as I will, too, henceforth.

I expected the books to be rather irreverent. After all, these are Legos---er, toy building bricks we're talking about. But the books are actually quite serious. I mean, things can't be too serious when they're illustrated with little brick people and whatnot, but the books definitely don't feel like they're going for laughs. The overall tone is similar to that of any high school history textbook, just with better illustrations.

There is a lot of clever usage of bricks, and a surprising amount of detail. The only photo that struck me as truly odd was this picture of a doctor operating on William McKinley with what appears to be a croissant. 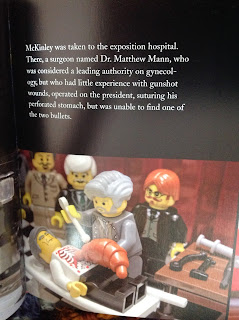 I think maybe the croissant is supposed to be McKinley's perforated stomach? I don't know. It has become my favorite photo of William McKinley, though.

I was impressed by the length of each book. Apparently I hadn't bothered looking at Amazon's Product Details because I was expecting thin paperbacks with a couple photos per assassination attempt/battle. Instead, I received hardcovers that are nearly 300 pages long. (The Assassination! book is now available in paperback.) Each book contains more than 400 photos, and I can't even imagine how long it must have taken to create each scene. (The same artist had previously done brick versions of Bible stories, which must have taken even longer. Maybe this is how I can monetize my 11-year-old's endless hours of Lego play.)

Each page generally contains two photos with corresponding paragraphs. You'd think that with only two paragraphs per page reading these would be a breeze, but that wasn't the case. The text is detailed and informative, but also quite dry. I love these topics, but I found my mind wandering constantly as I tried to pay attention. The dull text and intriguing photos made for a weird and not entirely pleasant juxtaposition, but the cool photos wound up outweighing the bland text, so overall the result was positive, I guess.

The last 120 pages of Revolution! are dedicated to the French Revolution, which was surprising, especially since that wasn't mentioned in the exceptionally long subtitle. To be honest, I haven't even read that part yet, though I did look at some of the pictures.

The books get mixed reviews on Amazon. The negative reviews are largely from parents who bought them for their children and were disappointed at the gore and adult content in the books. Part of me thought, "It's a book about assassinations! What did you expect?" (Sort of how I felt about people giving negative reviews to the "biography" of Millard Fillmore, whose cover featured a photo of Fillmore riding a unicorn.) But then I noticed that Amazon has the books listed as suitable for 10-13-year-olds, and that doesn't seem entirely appropriate, at least not without a hefty dose of parental involvement.

The "gore," of course, is all represented in bricks, but even Lego blood can get a bit overwhelming, especially when it's splashing out of a president's head. There are also references to other issues that parents might not want their kids exposed to. In Assassination!, for example, there is a description of the Oneida Community, where Charles Guiteau (James Garfield's assassin) had lived, and how the community practiced open love that required men to learn to have sex without ejaculating. It also describes how the federal soldier who shot John Wilkes Booth had previously castrated himself with a knife. In Revolution!, there is a description of soldiers contracting venereal diseases from prostitutes in New York, and how one man was found murdered and castrated in a brothel.

So, no, probably not light, fun reading for young kids. On the other hand, if you're okay providing some parental guidance when if/necessary, these books could serve as an approachable way to learn about crucial pieces of American history.

For adults, like I said, they're not really engaging reads so they're probably not great for people who want to learn the details of these events. For weird history buffs who already know the stories and want to see them illustrated in a unique way, I think they're amazing. Assassination! and Revolution! would be excellent additions to any history fan's coffee-table-book collection.
Posted by Jen Presidentress at 6:50 AM