Welcome to Part 2 of Presidentress' historical tour of New York!

You'll remember from Part 1 of my tour that people like rubbing, licking, and otherwise posing with the Bull of Wall Street's testicles. Well, across the street from the bull's balls is the old U.S. Customs House, where Chester A. Arthur served as Collector of Customs, a highly coveted position bestowed upon him thanks to the strong New York spoils system. I forgot to take a picture of it, though. 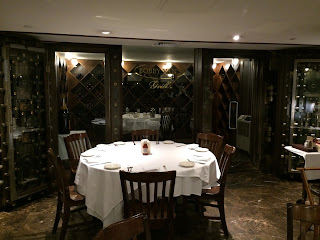 Sort of related, in the sense that it involves money and power, is where we ate lunch on the first day of our tour. There is now a Bobby Van's Steakhouse in the lobby of the old J. P. Morgan bank. In the basement, which used to be the bank's vaults, is the Vault Grill. One of the private rooms (which also does double-duty as a wine cellar) was J. P.'s own private vault, and that's where we ate. Since my love for Robber Barons rivals my love for presidents, this was an awesome experience.

We walked off our lunch by visiting several other sites, including Cooper Union, where Lincoln gave his famous Cooper Union speech. 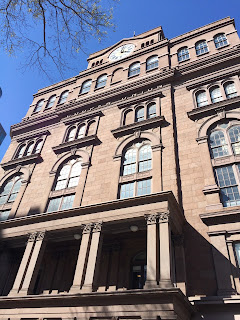 Speaking of Lincoln, we also stopped by Gramercy Park, where there's a statue of Edwin Booth, brother of John Wilkes. Edwin lived in Gramercy Park and was a famous Shakespearean actor. His home is now the location of the Players Club that he founded. 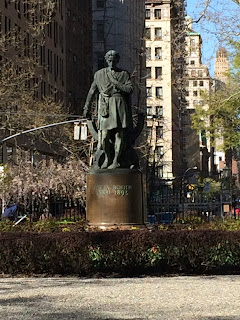 I didn't get a photo of it (because I didn't realize it was there at the time), but Samuel Tilden also owned a house in Gramercy Park. You'll remember Tilden from such disputes as the Election of 1876 and the Compromise of 1877. Also from the cake I made a couple months ago. Tilden's house is now home to the National Arts Club and is located just a couple doors down from Edwin Booth's old abode.

We also stopped by the New York Police Department's former headquarters, where Teddy Roosevelt was Police Commissioner. The building now contains private condos, so we couldn't go in. 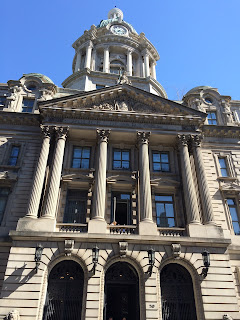 Then we walked by Roosevelt's childhood home, which we also couldn't go into because it's closed for renovations. (Thankfully we knew this ahead of time or else I would have been crushed.) 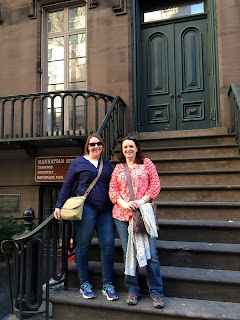 Our next stop was Tammany Hall, home of the famous/infamous political machine. Most recently it served as an art school, but apparently it is now undergoing major renovations as well. 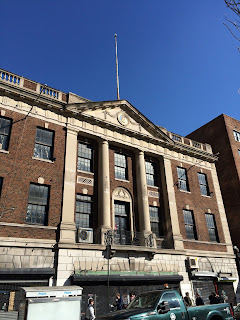 We also somewhat unexpectedly stumbled upon a statue of William Seward. Seward was Secretary of State under Lincoln and Andrew Johnson, and is probably best known for Seward's Folly, or the 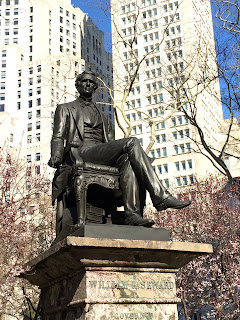 purchase of Alaska. What many people don't know is that he was also targeted for assassination the night Lincoln was killed.

John Wilkes Booth's plan was that while he was busy killing Lincoln, two other people would kill Secretary of State Seward and Vice President Johnson, thus upending the Executive Branch. Only one of the plots wound up successful. The guy who was supposed to kill Johnson chickened out, and Lewis Powell, the guy who was supposed to kill Seward, tried but failed. His gun misfired, so he wound up pistol-whipping Seward's son and then stabbed Seward several times, but Seward survived. (If you want to learn more about Seward and the assassination attempt, make sure to read Sarah Vowell's Assassination Vacation. I can't wait to hunt down the Seward Plaque in D.C.)

I did a little more digging and learned that there was some controversy surrounding Seward's statue. The same sculptor had previously created a statue of Lincoln, and some people claim that the artist simply recycled Lincoln's body and slapped Seward's head on top.

Incidentally, my New York friend said that people often steal the quill from Seward's hand, so we were lucky to find it intact.

And speaking of statues, on Day Two of our tour, we hit (figuratively) Columbia University and saw 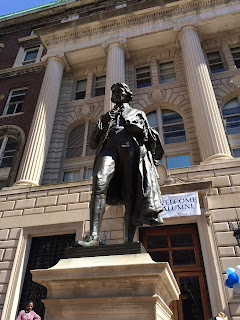 the building where Lou Gehrig used to hit (literally) Columbia University. (There were no baseball fields, so he did the best he could, which involved accidentally breaking windows with his home runs.) That area is just a stone's throw (if you're Gehrig) from a forlorn statue of Thomas Jefferson.

Apparently the statue, bequeathed by the estate of Joseph Pulitzer, was supposed to be installed in New York's City Hall Park near a statue of Nathan Hale. But Hale's sculptor didn't want another statue there, so the plan was foiled. Instead, the Jefferson's statue was relegated to a courtyard in front of Columbia's Graduate School of Journalism, where it's not visible from the street and no one but J-School grad students and weird people searching for presidential relics will find it. Poor Thomas.

Apparently there is also a statue of Alexander Hamilton on the Columbia campus, but I didn't learn about that until just now, so I didn't seek it out.

After Jefferson, we walked several blocks to Grant's Tomb. My New York friend had never been inside so it was something new for all of us. The building itself is lovely, but it's surrounded by a strange art installment: a series of garish mosaic benches that pay homage to everything from Smokey Bear to seahorses. They were cool but felt out of place at Grant's Tomb. 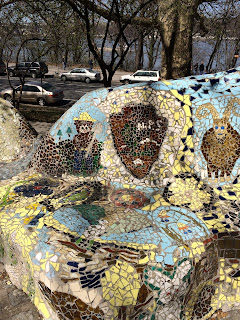 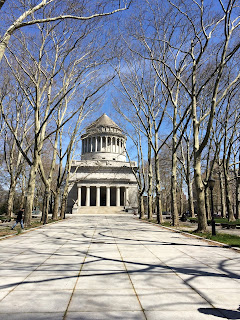 Anyway, I'm a big Grant fan, so it was nice to be able to pay my respects. (Yeah, "paying respects" and taking a selfie...they don't have to be mutually exclusive.) 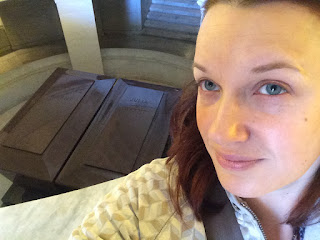 My BFF and I also attended a Broadway show and afterward we met Jeff Daniels, one of my very favorite actors. I'm including that tidbit here partly to brag but also because I've featured Jeff Daniels in two presidential-ish Separated at Births: William Jennings Bryan and William Henry Harrison.

Thus concludes Presidentress' historical tour of New York. There are dozens and dozens of other presidential (and related) sites I didn't get to see, so I might need to go back. If you're in the area, seek out some of the places I've mentioned here, and feel free to share your finds. Happy travels!
Posted by Jen Presidentress at 7:27 AM