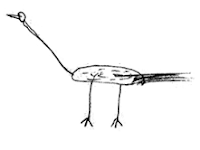 Dear readers, I need your help in solving a presidential mystery.

As you might remember from my recent post about a bawdy picture that was sent to James Monroe, I'm currently reading a book called Presidential Doodles. I first became intrigued by presidential doodles after reading this post from Mental Floss. There are some fascinating doodles there, but I was especially drawn to the strange bird and goofy-looking face from Warren G. Harding. (Because they look cool, not because of my growing obsession with Warren G. Harding.)

So imagine my surprise as I was flipping through my book and saw these doodles not in the Harding section but in the---gasp!---Benjamin Harrison section. Long-time readers will remember that I consider Benjamin Harrison the most forgettable president, and that I'm actually a bit confused as to why that is.

I had a conundrum on my hands: Who drew the weird bird and creepy face? Harding or Harrison? I decided to do some research, and by "research" I mean that I sent an email to the Harding Home Presidential Site and the Benjamin Harrison Presidential Site to ask which president doodled the doodles.

I heard back almost immediately from the Harding folks: It wasn't him.

It's been a couple weeks now and I haven't yet heard back from the Harrison people. Maybe they have better things to do than worry about some doodles. I'm going to go ahead and assume that my book has it right, and the doodles really are his. That's good news because Benjamin Harrison finally has meaning for me! He's grown a nugget! (If you don't understand what I mean, click the link up above about Harrison being the most forgettable president.)

But there might be an even greater mystery surrounding these doodles. While I was thoroughly scouring the web trying to find the source of the doodles, I came upon a blog post that compared the presidential doodles to album art. Amusing, but not really my thing. In the comments to that post, though, was an interesting observation by someone who said both doodles are "actually drawings that result from a cute story you tell kids" and that the bird one is found in a Little House on the Prairie book.

I'm not as familiar with those books as I should be, so I turned to some people who are. Through their help, I located the bird story, which Ma tells the girls in On the Banks of Plum Creek.

This blog post does an excellent job showing how the story is told/drawn, but if you don't want to click over there, the idea is that the bird's body is a pond, and the feet are houses where people live, and the legs are the path the people in the houses take to get to the pond, etc. By the time you're done telling the story you have the complete bird. (The tail is fish flying out of the pond, and the beak is an old guy's nose. But click over to that blog to get the complete idea.) 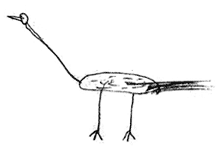 Now, I have to admit that Harrison's bird does look like it could be telling that story, although the bird's head is supposed to be a house, and his bird's head isn't a house. But maybe there's another version.

What I'm having a hard time with, though, is finding a story that goes with the face. Now that I've seen that bird story, the face looks like it really could be part of a story like that...but what is it? My exhaustive google searches are too broad to have brought up any results. AND I NEED TO KNOW! 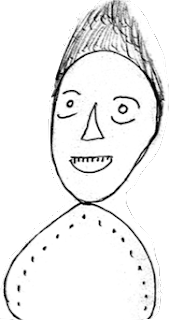 If anyone has any idea what story might go with that face, please let me know! Or make one up. Maybe those little dots are cabinet members or something.
Posted by Jen Presidentress at 9:44 AM