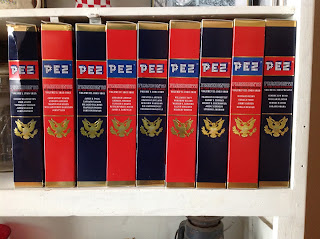 I know there's nothing you'd rather do right now than scrutinize Presidential Pez Dispensers. So let's get to it!

Anyway, when I got this year's sets, I was disappointed in the quality. I mean, yeah, they're Pez dispensers, but until now I'd been fairly impressed with their resemblance to the presidents they represent. Sure, they weren't all perfect. Calvin Coolidge was questionable. But generally, you could tell who they were supposed to be, and some were shockingly accurate.

But these last two sets are...off.

First, let's take a look at the quality between the first set and the last. Here's John Adams, and some guy. 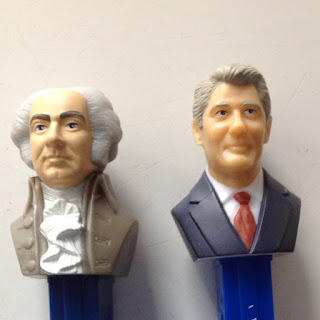 Do you know who that guy is?

If you said Bill Clinton, I'm not sure whether to be impressed or concerned, because that looks nothing like Bill Clinton.

Even putting the facial features aside, you can see the difference in whatever materials/paint they used, too. Adams looks almost like a wax sculpture, whereas Clinton looks like a Pez dispenser.

Here's the first set compared with one of this year's two sets. 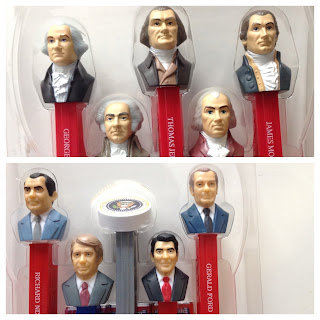 Okay, Jefferson looks more like Stephen Douglas than Thomas Jefferson, but at least he's detailed. Carter and Ford? Really? (Reagan is rolling his eyes at the whole thing.)

As I looked more closely, I noticed that many of the other sets also had that cheaper plastic look, but the guys still pretty much resembled themselves. Here's the FDR-LBJ set. 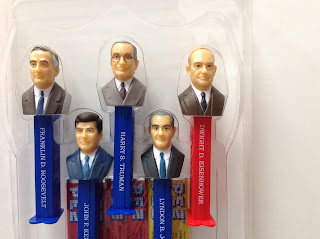 They're that fake shiny plastic, but they pretty much look like themselves. (Kennedy is a little questionable, but Truman and Eisenhower actually look more like themselves than the photo gives credit for. If you put these all in front of me with no names attached, I'd know who they're supposed to be.)

I'd never done a side-by-side comparison, and usually the Prez Dispensers live in their boxes on a shelf because Mr. Presidentressor hasn't yet built me a custom display. Because of that, I wasn't sure when exactly Pez changed from the "good" quality to the less-good.

Like American history itself, the tide seems to have turned between Buchanan and Lincoln. 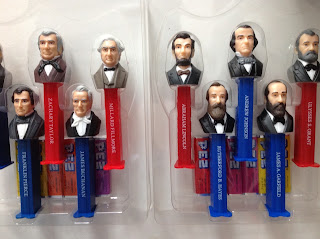 You can see how the Lincoln set looks more "fake," but at least they pretty much resemble who they're supposed to. (Also, Buchanan doesn't really look like himself, but at least he looks real.)

Now, let's take a look at these two guys. Tell me who they are. 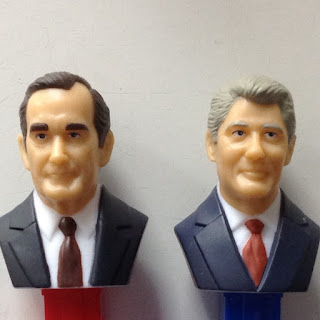 If your memory is good, you got Clinton (on the right) from when I mentioned him a minute ago. The guy on the left? That's George H. W. Bush (Bush the First), but I'd also give you credit if you said Ted Cruz, because it looks way more like Ted Cruz than George Bush. 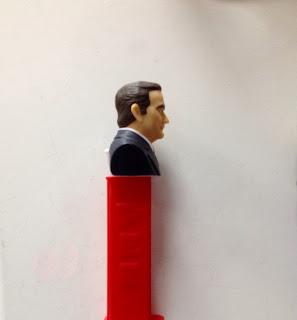 Here's the rest of the latest set. 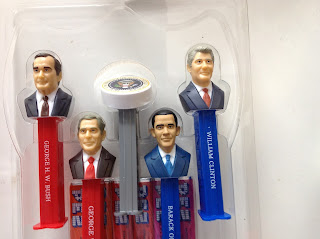 If Pez keeps with its tradition of releasing four or five presidents a year, it'll be at least 16 more years before we get another set. That should give them plenty of time to work on making the guys (and ladies?) more realistic again.

Posted by Jen Presidentress at 9:23 AM