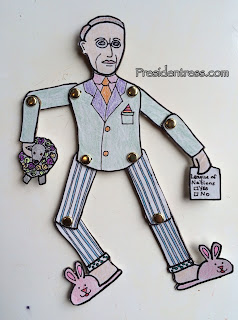 In this blog post, I'm going to show you how you can make your very own Woodrow Wilson puppet!!! But first, I'd like to share my favorite anecdote about Woodrow Wilson, which really has very little to do with the puppet but is worth knowing anyway.

Wilson's wife, Ellen, died during his first term as president. A few months later, he started dating Edith Galt, the woman who would become his second wife. One night they went to a play and, in one of the greatest typo-incidents in history, the Washington Post reported that "rather than paying attention to the play the president spent the evening entering Mrs. Galt." (They clearly meant "entertaining," but I'm glad they messed up.)

Another interesting fact about Woodrow Wilson (one probably more important than his dating practices and definitely more pertinent to this craft) is that he suffered a massive stroke during his second term, and his doctor and Edith basically kept it secret from the public and even from most people in Washington.

For the last year or so of his presidency, he was almost completely incapacitated. Although he eventually regained some strength and abilities, there were good chunks of time when he couldn't see, talk, walk, even sit up in bed. But why should that stop someone from being president?

His doctor publicly downplayed his condition, and his wife started serving as an intermediary between Woodrow and the rest of the world. When official business needed to be conducted, she would present it to the president in private, then report back with his input or decisions. (Supposedly. It's also possible she made decisions herself.)

On a few occasions, Edith and the doctor would put Woodrow in some nice clothes and prop him up in bed with a blanket pulled high over him to hide his partial paralysis. Then he would "meet" with other officials briefly, until he couldn't focus anymore.

Woodrow Wilson's wife and doctor had essentially turned him into a puppet...and now you can, too! 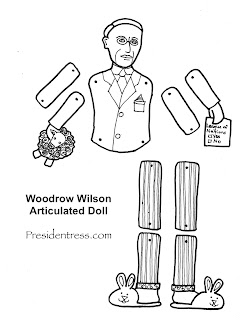 This is really more of an articulated doll than a puppet, but let's not get picky. Initially this was supposed to be one of those "jumping jacks," where you tie string to the back and then pull on it to move the arms and legs, but after numerous YouTube tutorials and hours of different attempts, that just wasn't happening. If you want to try, more power to you, and please share if it works!

Here's what you'll need to make the doll:


I mean, really, you can print this thing out, color it, cut it, and stick it together. It's not rocket science. But if you want this to be a lasting heirloom for your grandkids or something, take a little extra time to do it right.

Here's what I did.

I printed the template on regular paper, colored it, then glued it onto thick cardboard. 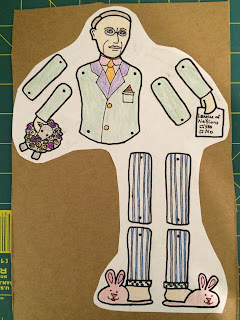 After it dried I cut everything out, which was difficult because my cardboard was really thick. Feel free to use an Xacto knife, a box cutter, or whatever works for you. But do a nice job. This is a president we're talking about. 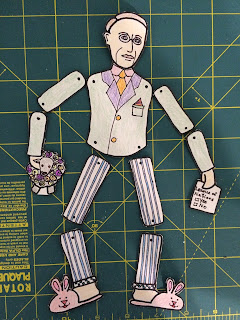 Once you have your pieces cut out, you need to make holes on the little black dots. If you're just using paper or cardstock, you can use a hole punch but it needs to be a very small one. If you don't have a hole punch, you can use a pushpin or something. Honestly, though, the easiest thing (and probably a necessity if you're working with something heavier) is an awl. Seriously, get one of these. So easy and handy for all your hole-making needs! 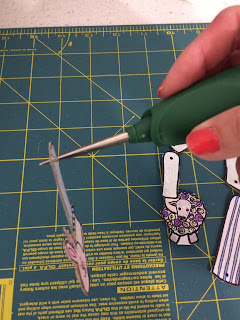 Then you can take your brads and fasten everything together. I wound up trimming the ends of my brads because they stuck out. I used scissors, but you should probably use wire cutters so you don't ruin your blades. But whatever works for you.

The brads (trimmed or untrimmed) can be kind of sharp, so be careful if you let kids play with this. I can just see Woodrow Wilson hanging around with Barbie and a couple Bratz dolls, can't you? I bet he'd like to spend some time entering them.


Congratulations! Now you have a Woodrow Wilson doll of your very own! Use it wisely!

In case you're wondering about the symbolism and authenticity of this...apparently when he was propped up in bed they dressed him in a gray sweater, not a suit. Oh well. He probably didn't have bunny slippers, either, if you want to get technical.

Wilson wanted the United States to join the League of Nations after WWI, but Congress didn't agree. It didn't help that Wilson couldn't campaign for his cause since he was a little incapacitated.

The sheep? That's because the Wilsons utilized sheep to keep the White House grass trimmed during the war. It cut down on costs and manpower, plus the sheep's wool was auctioned off to raise money for the Red Cross. (That should still be common practice as far as I'm concerned. I'd totally buy yarn made from White House sheep. On the other hand, people would complain about the sheep taking jobs from hard-working Americans. You just can't win.) Of course after his stroke, Wilson wasn't really holding sheep---or much of anything. So it's mostly symbolic.

If you make a Wilson doll, make sure you comment here or share your creation on the Presidentress Facebook page. You can also tweet it to me @MsPresidentress.
Posted by Jen Presidentress at 8:10 AM