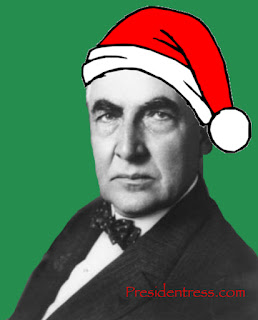 Last year I started the grand tradition of rewriting a popular Christmas song to give it a presidential theme. The other day I posted last year's masterpiece, Cleveland the Creepy POTUS, and now it's time to reveal this year's offering, about Warren G. Harding.

So curl up next to the fire with a cup of hot chocolate and this photo of Harding. Gaze into his eyes and sing this song about him, set to the tune of Frosty the Snowman.

Warren G. Harding
Was a suave, determined guy.
He carried on with a bunch of broads,
One who was a German spy.

Warren G. Harding
Was a ladies' man they say.
Forget Teapot Dome, he liked to roam
And bed all kinds of dames.

There was a girl from his hometown
Whom he was keen to hit on.
And that is how he got involved
With a mistress named Nan Britton.

Oh Warren G. Harding
Should have been a bit more cautious
But his whole plan was to get with Nan
All around his senate office.

Warren G. Harding
Learned Nan was in a family way.
But he said, "That's great, don't bloviate.
I'll help you with our babe."

Down by the seashore
Nan gave birth to Harding's daughter.
She accepted things like coats and rings
And the cash that he'd allot her.

He was elected president
But kept their secret life.
Nan looked forward to the moment when
She'd hear him call her "wife." 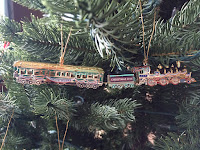 Oh, Warren G. Harding
Had to take a trip out west.
He went and died; people'd say Nan lied
And the truth would be suppressed.

Scribble and scrawl all,
Nan wrote a tell-all
To make a formal plea.
She said it was unfair,
She put it all out there.
What return to normalcy?

Notes:
First, that ornament(s) up there? That's the 2014 White House Christmas ornament featuring a train that Harding took (and got to drive for a few minutes!) when he took his fateful trip out west. The train later carried his body back after he died in San Francisco. Good times!

I actually got the idea to write this song shortly after finishing last year's song about Grover Cleveland. The names "Warren G. Harding" and "Frosty the Snowman" go so well together. At the time, I had planned on the song being more about Harding's affair with Carrie Phillips, the potential German spy, but that plan changed a few months ago when DNA testing showed that Harding really had fathered a child with Nan Britton.

In case you've forgotten from your high school history class, Teapot Dome is the name of a major scandal that took place during Harding's Administration. (It involved oil fields, not teapots or domes.) He probably didn't know about it, but since it happened on his watch, he gets the blame.

I wanted to work in the word "bloviate," one of Harding's favorites, and also the term "Return to Normalcy," Harding's campaign promise to help America get back to normal after World War I. (Dave Barry, in Dave Barry Slept Here, questions whether "normalcy" is even a real word. It is, but it sounds fake, doesn't it?)

Anyway, have fun singing this song while wrapping presents or baking cookies. If you go caroling this year, make sure you add it to your repertoire and see how people react!

As my New Year's Resolution, I promise to try to stop writing so much about Harding, because I know other people don't find him as fascinating as I do. We'll see how that goes.
Posted by Jen Presidentress at 9:17 AM

Email ThisBlogThis!Share to TwitterShare to FacebookShare to Pinterest
Labels: Harding