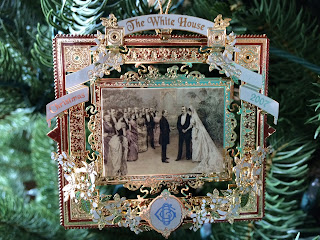 Last year I gave my Facebook friends a very special gift: A Christmas carol about Grover Cleveland. Now, as the holiday season approaches once more, I share it with the rest of the world as well.

Stay tuned for another presidential Christmas song later in the month, too! (Presidentress: The gift that keeps on giving.)

With no further ado, here is Cleveland the Creepy POTUS, set to the tune of Rudolph the Red-Nosed Reindeer:

You know Taylor and Tyler and Arthur and Clinton
Wilson and Hoover and Truman and Nixon
But do you recall the most lowlife leader of all?

Cleveland the creepy POTUS
Had two very separate terms
And if you really knew him
It would likely make you squirm.

He date-raped a widowed woman
Then she went and had his son.
He had her declared nutso
And locked away from everyone.

His best friend had had a kid.
He watched her grow up.
After the friend met his fate,
He wanted her to be his mate.

People thought he'd marry her mom
But he married her instead.
Cleveland, the creepy POTUS
Your story cannot be unread.
Posted by Jen Presidentress at 7:52 AM

Email ThisBlogThis!Share to TwitterShare to FacebookShare to Pinterest
Labels: Cleveland