Harding's Mistress was Ahead of Her Time

It has been a few weeks since we learned that Warren G. Harding really did father a child with his alleged-and-now-confirmed mistress, Nan Britton.

Some people think I exaggerated my excitement over that news, but seriously, for days I felt like I was floating on rainbows with little cartoon bluebirds chirping merrily around my head. I imagined that must be how people felt when we walked on the moon. I was actually a bit worried about myself.

I also took advantage of some easy jokes, making and posting these pictures to the Presidentress Facebook page: 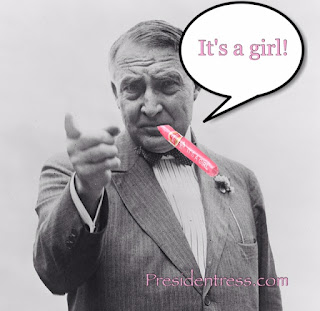 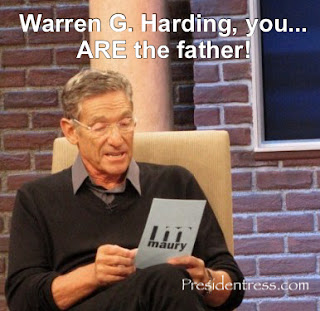 I mean, it's easy to joke, right? At the same time, there's a lot about this situation that's very un-funny, and if you'll excuse my posting of those two photos above, I'd like to get serious for a moment.

I've been thinking a lot about Nan Britton and what she must have gone through. So many people didn't believe her, and those who did thought poorly of her. She was a liar at best and a trollop at worst (or is that reversed?). Until the day she died, she knew that people---especially the people who mattered most (i.e., Harding's family, and possibly her own daughter)---thought she had fabricated the whole thing.

Not only that, she had to go through hell just to have and raise her child. Britton dedicated her book to single mothers and their children, and said that she hoped her story would bring them justice. Back in 1919, unwed mothers were not supposed to keep their children, nor was it even possible in most cases.

Nan Britton didn't have the support of society or the government; she just had the stigma, which she tried to avoid by pretending to be married, or by pretending the child was someone else's, or by marrying someone out of desperation to reclaim the child she was forced to give to her sister to raise. Most other women in similar situations were forced to walk away from their children permanently. Britton refused to do that.

As was so often the case then (and to a large degree still is now), Britton took all the burden while the father (in this case Warren G. Harding) got off scot-free. Yeah, his reputation might have suffered a bit, but only after he was dead. Britton had to deal with it for her whole life.

It's easy to paint Nan Britton as...well...easy. But she was more than that. She was a "New Woman," part of the wave of feminism that began in the late 1800s and continued into the 1920s. She was an independent woman during a time when it was only just becoming acceptable for women to be independent. She set off on her own several times, going to new cities, finding work, securing housing, supporting herself, and even embracing her own sexuality (gasp!). I'm not sure if Britton considered herself a feminist or was fully aware of the ground she was helping to break, but she certainly flouted social norms, and I don't see that as a bad thing.

I'll admit I initially felt disdain for Britton, back when I thought she had made up the story for fame or fortune. Yet how often is that still the general reaction when a woman steps forward with claims of sexual contact with a famous, powerful man? How quick are we to dismiss accusations of a beloved comedian or skilled quarterback raping someone? (To be clear, Britton didn't accuse Harding of any wrongdoing, but there are certainly similarities between the way she was treated and the way victims are today.) Yes, there will always be people who make up false accusations, but not nearly as many as the women who are afraid to come forward for fear of being ridiculed, scrutinized, and dismissed, as Britton was.

My opinion as an outsider, especially one nearly 100 years removed from the situation, doesn't matter much, but I do feel bad that I dismissed Britton's claims...though I also admit I held out a strange hope. For some reason I wanted the story to be true, which I suppose explains my excitement over the news that it was.

And of course, we can't forget about Elizabeth Ann, Britton and Harding's daughter. According to some accounts I've read, Britton's descendants always believed the Britton's claims. According to other accounts, they doubted it. My guide at the Harding Presidential Site said that Elizabeth Ann thought her mother fabricated the story, which led to an estrangement between them. Poor Nan had a daughter who thought she was a liar; poor Elizabeth Ann lived her life never knowing with certainty who her own father was. Far from claiming her rightful place as the child of a president, she and her mother were reduced to being viewed as oddities, punchlines, or cautionary tales.

I'm glad the truth is finally out; I just wish for Nan and Elizabeth Ann's sake it could have come a decade or two earlier.
Posted by Jen Presidentress at 9:57 AM

Email ThisBlogThis!Share to TwitterShare to FacebookShare to Pinterest
Labels: Harding