McKinley Still has a Mountain 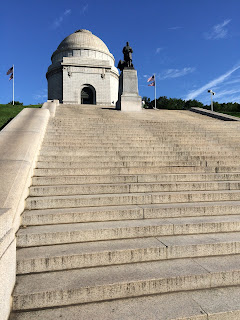 Eight people sent me links about the Alaskan mountain's name change from Mount McKinley to Denali. I considered writing about it but try as I might, I just couldn't get interested in it. Sorry.

When I explained this to my friend Anne, she suggested I write about William McKinley's favorite pie or something, just to distract people. I don't know his favorite pie (note to self: find out) but I did recently take a trip to visit his tomb, and I've been meaning to write about that. What better time than now?

I visited McKinley's monument when I was in Ohio a few weeks ago. It was actually the second time I'd been, the first being last year when I was there with my husband and kids. My children, probably tired from traveling and climbing the 12,000 (or 108, but who's counting?) steps to the top, fought and yelled at each other when we got to the mausoleum part. I wanted to avoid being disrespectful to the dead, so I hurried them out and didn't have a chance to really absorb any of it. This time, though, I was alone and could take as much time as I wanted. 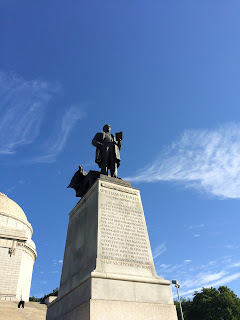 The McKinley Monument is located in a park in Canton, Ohio, just a few steps from a science/history museum with a room dedicated to McKinley. Even though I had gone to the museum with my kids the year before, I decided to go again for two reasons: 1) My Museum of Science and Industry membership got me in for free, and 2) I needed to take pictures of Ida McKinley's slippers. (That's another post for another day.)

I had planned on visiting the museum first, but since I arrived before it opened, and since the nearest Starbucks was 14 minutes away and required that I get back on the interstate, I decided to take advantage of my free time by taking in McKinley's tomb/monument/memorial.

If you've never been there, you need to understand that this thing is huge. The tons of stairs make it a popular spot among fitness buffs who run up and down for their exercise. Being less of a fitness freak, I panted my way up and stopped a couple times to take photos. When I got to the top I tried to block out the guy doing tai chi so I could read some of the information posted about McKinley and the monument.

One of the signs made me snort and inspired me to send this text to my friend Kirstin:


You know, the info at this memorial says that it's dedicated to a man "of simple and dignified life" and that the "funds were not to warrant a lavish display, even if that had been appropriate, which it was not." And yet this is the most effing elaborate presidential monument I've seen. 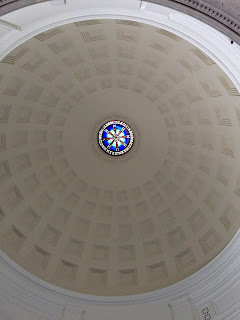 Seriously, I get that this was built toward the end of the gilded age, when opulence was a given. I get that he was a president, and an assassinated one, no less. He became a martyr, and maybe people felt a need to honor him in a material way. But if this isn't a "lavish display," I don't know what is. And the current landscape isn't even as elaborate as the original: There used to be a waterfall and small river in the shape of a sword leading outward into the park from the base of the monument. Now it's just grass.

Given McKinley's legacy of the Spanish-American War---a war whose main goals were to obtain land and establish American superiority---I can't help but think of this building as not only as a monument to McKinley, but to American imperialism in general. It's big. It's foreboding. It's white. It's...apt.

So...wow. I meant for this to be a lighthearted distraction from the McKinley/Denali debate, but I guess it didn't quite end up that way.

Will my selfie with an animatronic President McKinley and First Lady lighten the mood? 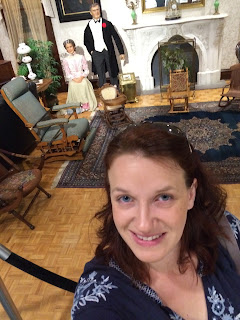 And here, I just found this on the Mrs. Field's blog: "William McKinley was a very simple eater. No favorite desserts seem to be found." Bummer.


Posted by Jen Presidentress at 12:14 PM