If this November hadn't been such a crappy, hectic month I would have had this post up and ready in time for Black Friday and Cyber Monday and whatnot. Sorry. But better late than never, right? If you're looking for the perfect gift for the history nerd in your life, you've come to the right place. (You might also want to check out last year's gift guide, as most of it is still relevant.)

The Amazon links contained here are affiliate links. Shopping through them helps support this blog, so please do me a solid and use them. The other links are not affiliate links, so if you don't like me you can still feel good about clicking on them because they won't support me in any way.

Without further ado, here are my 2016 Holiday Picks:

If you don't already have the Broadway cast recording of Hamilton, you should really get it. Really. And if you already have it, your next purchase should be the Hamilton Mixtape. It puts a new spin on those "old" beloved favorites from the show, with artists like Ja Rule, Kelly Clarkson, Alicia Keys, and Jimmy Fallon & The Roots. You can preorder it right now (some tracks are already available) but the whole album will be released next week.

Do you want to act out the musical while listening to the soundtrack? Then why not pick up some Hamilton, Jefferson, and Washington finger puppets?

We also have the Lincoln and Poe ones. (The Poe can represent John Wilkes Booth if you want to do any other theater reenactments.) 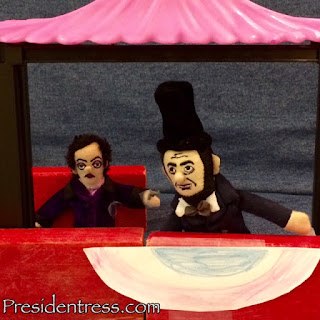 Or get a little radical with an Emma Goldman finger puppet. Think of all the fun you can have!

Maybe you're looking for something a little more sophisticated? Perhaps a nice, world-leader-scented candle to set the mood? Then you definitely need to check out JD and Kate Industries' shop on etsy. They're the folks behind Hottest Heads of State, and they've recently expanded their expertise into the candle-making business. You can select from candles that smell like Justin Trudeau, Vladimir Putin, and Donald Trump. 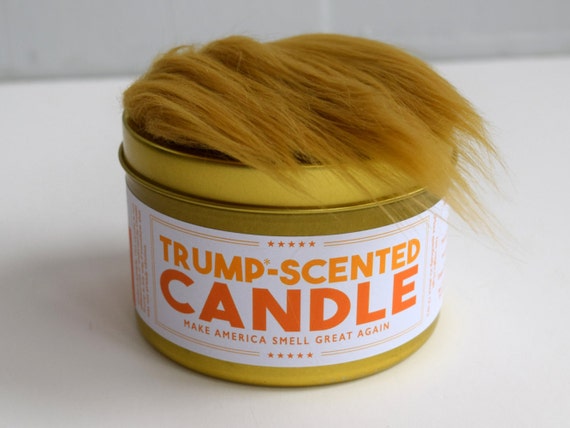 I have the Justin Trudeau-scented one, and it smells just like a warm, tender, Canadian hug. Also, it comes with a Justin Trudeau temporary tattoo! 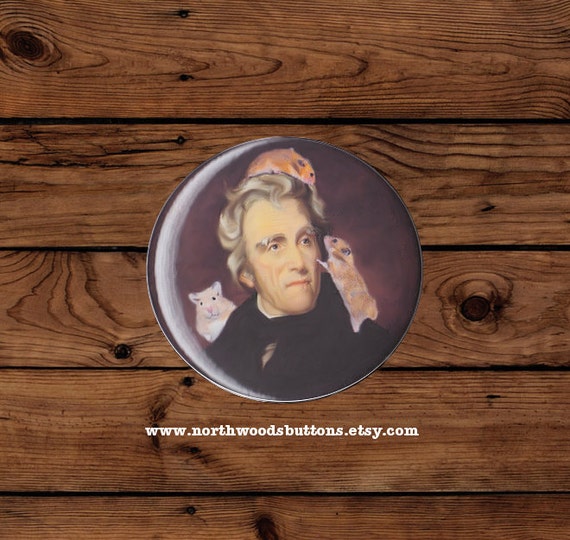 I got this Andrew Jackson-hamster magnet last year from The Atomic 50s Housewife shop on etsy. I don't see it listed there anymore, but if you really, really want one, maybe you can contact her and she'd make one?

Next up are some great shirts from Amorphia Apparel. They have a ton of nerdy/geeky/funny shirts, but my favorite series are their History League shirts, which take historic people/events and turn them into pseudo-sports logos, and the Hirsute History shirts, which feature famous historical hair.

I couldn't decide which History League shirt I wanted, so I have two. The nice thing is that you can get a single logo or you can get two on a shirt to represent a "matchup." I have one shirt for the Muckrakers of the 4th Estate, and the other shirt is a matchup between the Roosevelt Trustbusters and the Robber Barons. 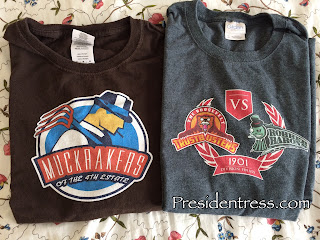 I don't yet have any Hirsute History shirts, but Chester Arthur is high on my list. 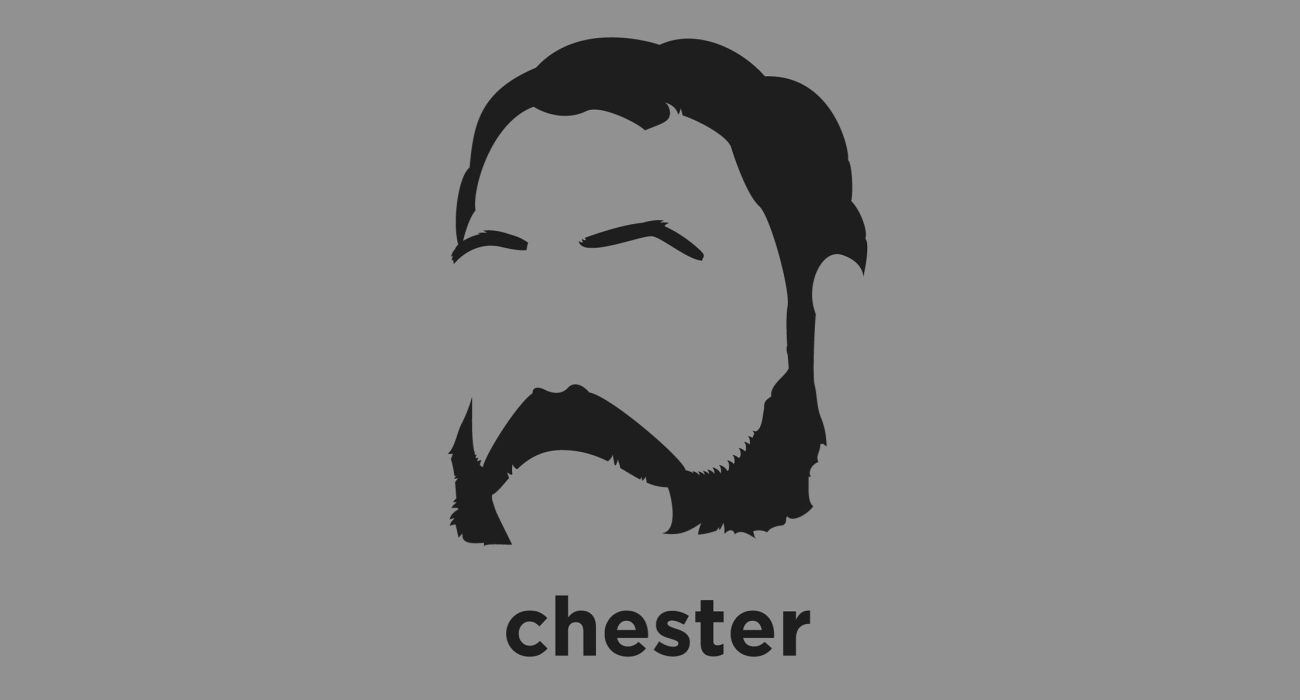 Or if you really want to stick with that Justin Trudeau theme, they've got him covered, too. 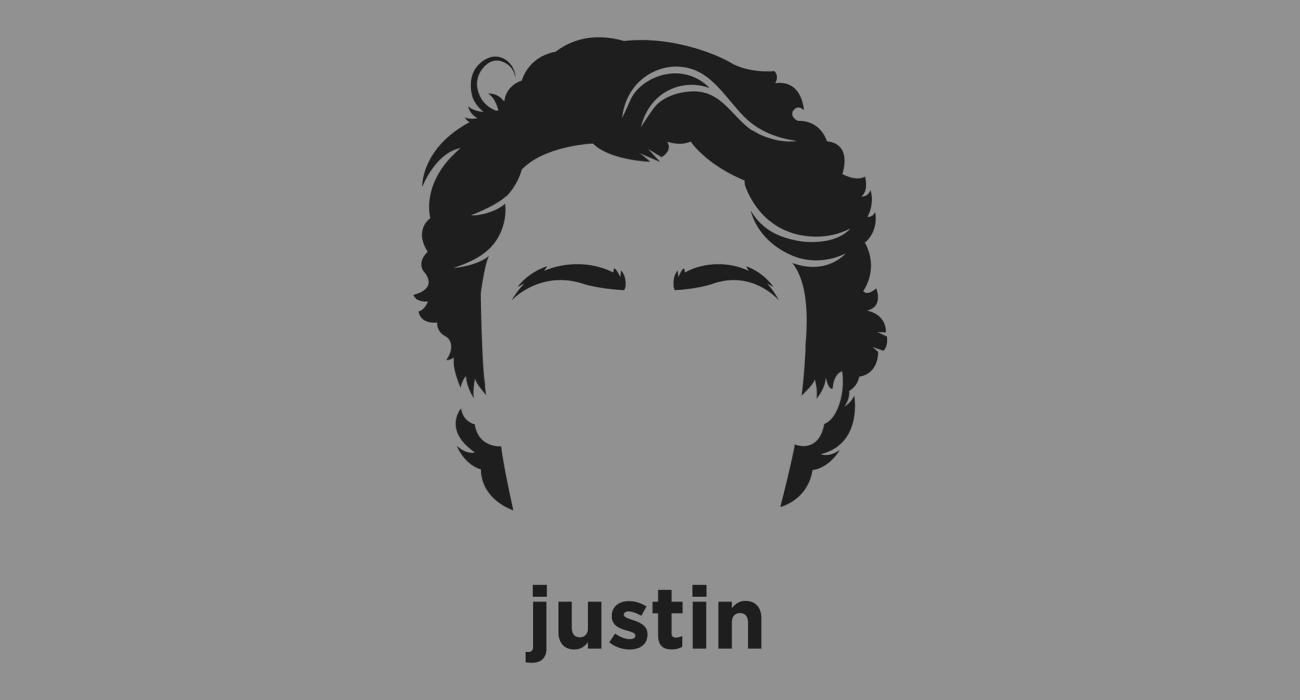 They also have the hair of actors, musicians, authors, philosophers, and more. Shirts are available in unisex and women's cuts.

If you're looking to support some non-profits, here are some ideas for you.

And while we're talking about Chester Arthur (we were, a minute ago), last year I created a picture of Chestnut A. Arthur. I had kind of forgotten about him until I recently read that the chestnuts we eat in America have been imported ever since a blight wiped out American chestnut trees in 1904. The American Chestnut Foundation is trying to reintroduce blight-resistant chestnut trees, and for a $10 donation, they'll plant one in honor of a person of your choice. It seemed fitting that I should have a tree planted in honor of Chestnut A. Arthur, and you can, too. (Or pick someone else...Chestnut A. Arthur won't be offended. In any case, help make American chestnuts great again.) 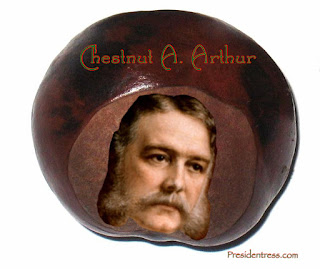 Oh, and if you want a presidential ring for that special someone? Let's talk. 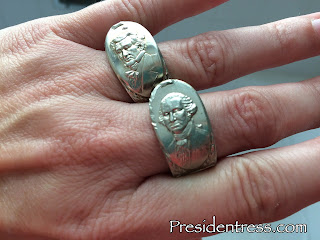 Posted by Jen Presidentress at 11:44 AM