A few months after the show opened on Broadway, my parents gave me my birthday gift: a trip for my mom and me to fly to New York and see the show! Sadly, we had underestimated how expensive tickets would be. (We knew they would be a lot, but didn't realize we'd literally need to sell a body part.) Shortly after postponing the New York trip until "sometime later," plans were announced for the opening of the show in Chicago. It meant we'd have to wait for it, but it would likely be less expensive, especially since travel would only require the cost of gas and parking, no hotel or flights necessary.

When tickets for Hamilton Chicago went on sale back in June, I dedicated the whole morning to getting some. I sat there with my phone, my iPad, and my computer (with two different browsers open) desperate to snag some tickets. I wound up scoring two seats for a couple days before my birthday. 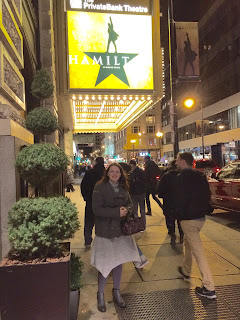 On November 22, my mom and I headed into the city to finally catch the show!

I had been worried about two things: 1) That after having listened to the soundtrack hundreds of times, the show itself wouldn't be as exciting as it would have been otherwise, and 2) That I wouldn't like the performers in Chicago as much as I liked the voices of the original cast.

I needn't have worried. As to worry #1: There is so much more to the show than just the music. I had read about things like the rotating stage and the dramatic death scene (spoiler alert: Hamilton dies), and both really brought the story to life, so to speak. Even just the body language and facial expressions of the actors added so much to the music. Although there are funny/amusing parts to the soundtrack, the humor comes through much more in person, as does the drama. The show was amazing, and everything I had hoped it would be.

As to worry #2, the cast was fantastic. There were a couple parts I didn't enjoy quite as much as the originals, and a couple that I thought were better. Mostly the cast members were different, but just as enjoyable. I'll explore that a little more, and keep in mind that I'm mainly basing my opinions against the cast recording, which means I'm not really comparing apples to apples. It's my only basis for comparison, though.

Now, Lin-Manuel Miranda is a genius. A true genius. I would have loved to have seen him perform in New York. But (I know this is sacrilegious) I don't love his voice/singing. Miguel Cervantes, who plays the lead role in Chicago, was probably better technically. Cervantes didn't blow me away (so to speak) but his performance was solid.

Angelica (Karen Olivo) and Laurens/Phillip (José Ramos) were also comparable to their New York counterparts. They didn't stand out as being significantly more or less impressive.

Aaron Burr (Joshua Henry) really grew on me. My initial reaction was that he was fine. I had nothing to complain about, but I didn't think he really stood out. Over the course of the show, though, he impressed me more. The pinnacle for him (in my opinion) was in "The Room Where it Happens." I've always liked that song, but Henry's phenomenal performance made me love it even more. When it ended I even thought to myself, "Good god." It was stunning. 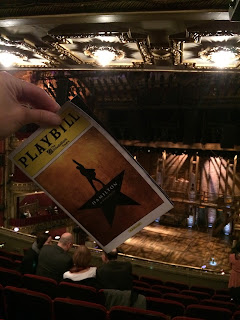 There were two actors who stood out immediately, from the opening number, as something special. The first was Jonathan Kirkland as George Washington. I'm not going to say he was better than Christopher Jackson because I love Christopher Jackson, but Kirkland's voice was deep and rich and he played the role beautifully.

The second was Ari Afsar, who plays Eliza. Now, I'll admit, Eliza is probably my least favorite character (just from a vocal standpoint) on the original soundtrack. I've always felt like Phillipa Soo was a bit shrill, and it made me think of her parts as kind of whiny. In contrast, I found Afsar's voice to be lovely and compelling, and I enjoyed listening to her. Her performance of "Burn" was powerful and moving, and (again, sacrilegious to admit) it was the first time I truly enjoyed that song.

In Chicago King George is played by Alexander Gemignani. Now, I can't really compare his version to Jonathan Groff's because so much of King George involves body language and expressions, but I can say that he was immensely enjoyable. His voice and (singing) style were quite different from Groff's, but hilarious nonetheless. We loved him.

As I mentioned, there were a couple roles I didn't enjoy as much. Lafayette/Jefferson (Chris De'Sean Lee) was good. His acting and expressions were great, but his voice and overall character paled compared to Daveed Diggs (based on the soundtrack and the clips I've seen). Mulligan/Madison (Wallace Smith) also didn't quite live up to expectations. Even though the parts are relatively small, I really enjoy Okieriete Onaodowan's performances on the soundtrack. As Mulligan, his voice is deep and gravelly. As Madison, it's deep and refined. Smith, on the other hand, was sort of unremarkable. He wasn't bad at all; he just didn't stand out for me. I felt like Madison got a bit lost in the whole thing.

But even with the couple roles that seemed a bit underwhelming, I have no complaints at all. Seeing the show on stage was an enthralling experience, and I recommend it to everyone. (Duh, right?) Don't take out a second mortgage to get tickets, but if you have the chance don't throw away your shot at seeing this show.
Posted by Jen Presidentress at 11:42 AM