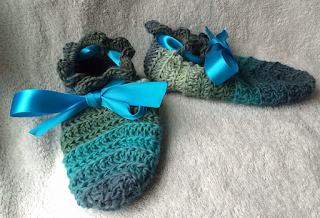 Today is the anniversary of William McKinley being fatally shot, so I'm taking this opportunity to talk about his wife's slippers.

Ida McKinley was a troubled woman, and for good reason. She lost her mother and her baby daughter within months of each other. Three years later, her only other child died at the age of 4. Somewhere in that time, she suffered trauma to her head which led to her developing epilepsy.

She never recovered from these emotional and physical wounds. Not a lot was known about epilepsy back then, so it took a lot of trial and error to find solutions. One of the first cures they tried was having her rest in isolation since her problems were likely caused by her inferior lady-brain being too troubled by the man-problems of the big, modern world. Needless to say, that didn't work.

Ida went through phases of being very active (in life and in her husband's career) and other phases where she had less mobility and a decreased ability to socialize. At times she was very dependent on William. During her White House years, she often avoided social situations, sometimes leaving the duties of the First Lady to Jennie Tuttle Hobart, wife of VP Garret Hobart. Seating arrangements at dinner were changed so she could sit next to, rather than across from, her husband. At times Ida would have seizures, and William became adept at holding a handkerchief in front of her face until the seizure ended, then carrying on as though nothing had happened.

Of course, the tragedies that would strike Ida's life weren't yet complete. In September of 1901 the McKinleys were in Buffalo so William could make an appearance at the Pan-American Exposition. Ida wasn't at the Expo with her husband, which is probably a good thing because she was able to avoid witnessing Leon Czolgosz shoot her husband. After William was shot, he ordered people to go easy on his assassin, and also instructed his aide to be careful in breaking the news to Ida. He would die a week later. 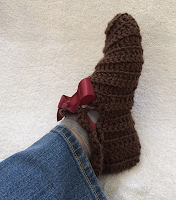 I, too, crochet, so a while back I decided to see if I could find the pattern she used. Sure enough, someone had recreated the pattern, so I bought it immediately and set out making pairs for myself and a few loved ones. They're not the most stylish slippers by today's standards, but they're historic and that's what's important. I found that jazzing them up with fun colors helped.

Last summer I visited a couple important sites in Canton, Ohio: The McKinley Monument and tomb, and the National First Ladies' Library. The Monument is right next to a science and history museum that has a room dedicated to the McKinleys. Among the items on display is a pair of slippers that Ida had crocheted. 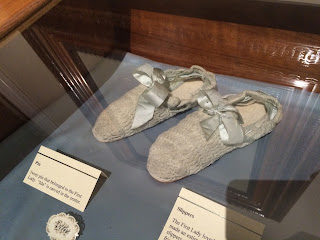 The First Ladies' Library is located less than a block away from a house Ida's family had owned, and a visit to the library includes a tour of the house as well. On the top floor is a very small museum, and I was pleased to find another pair of slippers there. In addition, there was a newspaper column (possibly an advertorial) about an Ohio company that provided leather soles that Ida would sew onto the slippers. My slippers don't have leather soles, but I loved stumbling upon that extra tidbit of information about how Ida made hers. 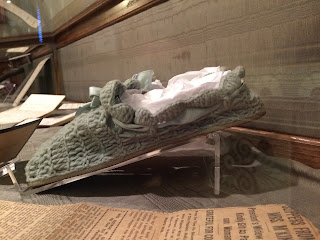 I told the docent about how I had found the pattern for Ida's slippers and had made several pairs. She seemed surprisingly underwhelmed to hear that. Oh well. I guess that's why I have a blog.

A couple other Ida McKinley slipper-fun-facts: 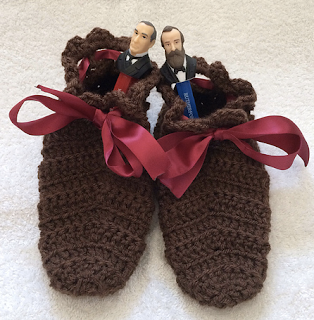 Now...don't get too excited...but if there's enough interest, I might consider doing a giveaway for a pair of custom slippers. I'd probably run this in time for the holidays, so if you win you could avoid scouring stores for the perfect gift for the person in your life who loves history and wears women's slippers. If this is something you'd like to see, be sure to leave a comment here or on my Facebook page.

Posted by Jen Presidentress at 11:48 AM