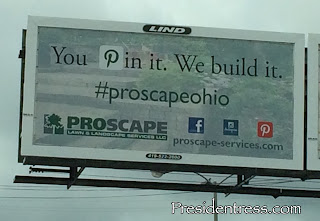 I sat there at a red light, staring at the sign in confusion. "You P in it. We build it." What? It seemed to be an ad for a landscaping company, so I figured maybe they were talking about swimming pools They'll create a swimming pool for you to pee in? I just didn't get it.

Then it hit me: Oh! You PIN it, they'll build it. That made so much more sense, although the company could have worked on their kerning a bit.

Anyway, the real meaning hit me just as the light was turning green, but I was so amused that I had to go back and take a photo of the billboard to share with the world.

And now I'd like to invite you to follow Presidentress on Pinterest. I promise lots of pins and no pee! Right now I have boards for Presidential Crafts, Presidential Recipes, Book Reviews, Funny Presidential Photos, and my Separated at Birth series. I'll probably add more in the future, and if you follow me, you'll be among the first to know!
Posted by Jen Presidentress at 12:21 PM