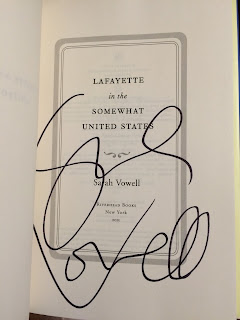 In this installment of "Stuff I Love," I'd like to discuss one of my favorite writers, Sarah Vowell. She writes books about American history, and if you haven't read her work, you should. These aren't your typical history books. They include information, of course---lots of it---but with a healthy dose of humor and personal narrative as well. I've laughed out loud at her work many times.

I was also fortunate to hear her speak in person last night at the Art Institute of Chicago, where she discussed her new book about the Marquis de Lafayette. I'd seen her on various TV shows before, but she was even funnier in person.

There was a book signing afterwards and I'd hoped to get a picture with her, but alas, no photography was allowed. I did give her one of my Presidentress business cards, though. I handed it to her and said, "I have a presidential blog--" at which point she burst out laughing and put her head down on the table. I'm not sure if she was laughing with me or at me, but I don't really care because the bottom line is I made Sarah Vowell laugh!

If I may go slightly fangirl for a moment, I suspect that she and I were separated at birth. I know that sounds a little stalkerish, so for the record I should state that my love of Sarah Vowell is less Leon Czolgosz-loves-Emma Goldman than it is Roosevelt-loves-Taft-before-they-became-enemies. There have been so many times I've read her work and practically yelled out, "Me, too!"

For example, in her book Assassination Vacation, one of her friends comments that she's like the "Six Degrees of Kevin Bacon" of presidential assassinations. She says that she has to constantly remind herself not to bring up McKinley at dinner parties. I can relate. One of the reasons I started this blog was to relieve some of the pressure that builds up trying to hold in anecdotes about Woodrow Wilson. In fact last week some colleagues and I were in Las Vegas on the High Roller, the world's tallest Ferris wheel, when someone spotted a sign down below for Pabst Blue Ribbon beer. Of course I had to blurt out, "The beer is called that because it won a blue ribbon at the 1893 World's Fair, the same fair where the Ferris wheel debuted!" My friends acted like I was interesting but I know they didn't mean it.

Another similarity? We both feel inadequate compared to Teddy Roosevelt, though to be fair, who doesn't? In an essay in The Partly Cloudy Patriot, Vowell writes about TR: "My whole life, no matter how happy I am I've always had this nagging feeling that Teddy Roosevelt is looking over my shoulder whispering, 'Is that all you are?'" I know I've mentioned in the past that I want to make a bracelet with the letters "WWTRD?" woven into it. What Would Teddy Roosevelt Do? (Answer: probably kill a rhino.)

At the talk last night, a woman tried convincing Vowell to write a book about the Articles of Confederation. She declined, but she did say she understands what it's like to be interested in things no one else is interested in. Meanwhile I have more posts about Warren G. Harding than any other president. I get it, too!

Another example? Many years ago I found myself a little too upset about a real estate agent putting American flags in all the yards in my neighborhood for the Fourth of July. (My friend Brian can vouch for this. I complained to him about it because he seemed like the kind of person who would understand.) Later I read another of Vowell's essays, in which she is frustrated for the exact same reason, only instead of complaining to a friend she calls up the organization that sponsored yard-flags. "The whole point of that goddamn flag is that people don't stick flags in my yard without asking me!" she said. Exactly that! Don't tread on my lawn.

Lest anyone think that Sarah Vowell and I hate America just because we hate people forcing flags on us, nothing could be farther from the truth. I think we both believe strongly in the founding principles of the nation, and we are both oddly reverent about much of our history, historical figures, and institutions. (Otherwise why would she write a book about Puritans, and why would I spend hours creating a Chester Arthur coloring page? It's because we care so much.) But seriously, being patriotic doesn't mean waving flags around and chanting "USA! USA!" In fact, at last night's talk Vowell asserted that it's a privilege of independence that Americans are able to yell at each other. The constant bickering is kind of what makes the country great.

She also dismissed the common rhetoric that the country has never been more divided than it is now. ("Uh, Civil War?") She said, "That's why it's good to know about history. It makes you feel better about yourself." I love that. We have indeed come a long way from, say, the Sumner-Brooks affair, although it would be kind of awesome if modern-day Congresspeople started whacking each other with canes.

I'm not like Sarah Vowell in every way. She knows a lot about music and movies, and I don't. I've never even seen her favorite movie, The Godfather. (I know! Sorry.) But despite that, I'm sure that in real life we could be BFF's. (Again, Roosevelt-Taft, not Czolgosz-Goldman. I swear I'm not clinically insane, although the Arthur coloring page might be evidence to the contrary.) So, Sarah, if you're reading this: Hi! Drop me a line and let's have tea next time you're in Chicago.

The rest of you need to go read some of her books. I promise you won't be disappointed.
Posted by Jen Presidentress at 7:05 AM