(If you missed Chapter 1, Chapter 2, and Chapter 3, make sure to read them first. Also, dislaimer: This is fiction.) 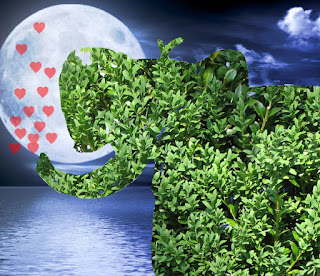 Things are About to Get Spicey

Caroline stormed out of the restaurant and waved a $20 bill in front of the valet. "Get my car here in less than a minute and this is yours," she told him. The valet was able to retrieve her car before Sean Spicer had finished paying the bill, and Caroline sped off toward home.

First she was mad. Controlling men pissed her off, and if someone could be that controlling over dessert, what else was he capable of? In a way, she was relieved to have seen the real Sean Spicer so quickly.

But at home that night, she started to feel dejected. Yes, she had dodged a bullet, but she couldn't stop thinking about running her fingers through his tufty hair that made him look so much like Ryan Gosling, if Ryan Gosling were clean-shaven, less attractive, less fit, and ten years older. She imagined dancing with him in a style far too risqué for Dancing with the Stars. She imagined him dressing as an Easter Bunny to hide eggs for their future children.

To take her mind off Sean Spicer, Caroline made herself a cup of tea and sat down to watch a movie, but no matter how hard she tried to pay attention, she kept finding herself looking out the window at the elephant topiary, which was illuminated by the moon and her pool lights. It took someone with very special talent, or very deranged obsession, to make something like that, and he had made it for her. “Oh, Sean,” she whispered to herself.

But then she thought about the cheesecake and got angry again. And then hungry. She realized she should have gotten a slice to go.

When her movie was over, she went upstairs to bed, alone and lonely. She tried to cheer up by reminding herself that within a month she'd likely be dating the head of a Silicon Valley start-up or an attorney for the pharmaceutical industry. That was more her style anyway. She tried to imagine showing up at a dinner party and introducing her date as, “My gardener, Sean Spicer.” Ridiculous!

She laughed, then she started to cry.

Caroline had just fallen into a restless sleep when she awoke to something striking her window. She heard a rustling outside, then a few seconds later something hit her window again.

She got up and tied a robe around herself. She looked out the window and saw the silhouette of Herbert Hoover.

She opened the window and yelled down, “Sean?”

“You don't have any rocks down here,” he said. “I’ve been throwing my American Flag pin! I'm glad you finally heard it because it was really difficult to keep looking for it in the dark.”

“Look, Sean, you seem like a decent guy, and you're clearly the sexiest White House Press Secretary since Ari Fleischer, but I just don't think things would work out between us.”

“Please, Caroline! Come down and give me a chance to explain!”

Despite being angry, sad, hungry, and tired, Caroline decided to hear him out. She closed the window and carefully walked down her winding staircase, then out to the garden.

There in the moonlight, in the shadow of the elephant shrubbery, Sean Spicer took her hands.

“I am so, so sorry,” he began. “I know it seems like I was trying to tell you what to eat, but that was never my intention.”

“It sure seemed like it!” Caroline spat at him, while at the same time tingling from the excitement of his touch.

“I'd never tell you not to eat a certain dessert…except for Dippin’ Dots.” he laughed a little but then muttered something that sounded like, “tiny balls of frozen communist tears.”

“Anyway,” he continued, “The truth is that I'm trying to work through a lot of issues surrounding my time at the White House. You have no idea what it was like there: the yelling, the whining, the verbal abuse, the tiny, tiny hands reaching out for my neck...” He looked off into the distance and shuddered.

Caroline softened a bit but was still cautious. “What does this have to do with cheesecake?”

“There are a lot of things that trigger me these days,” he said. “The scent of hair gel makes me see visions of Eric Trump. The smell of cheap whiskey makes me feel like Steve Bannon is right there. But the greatest trigger of all is the color orange.”

“Orange. Orange things, like sweet potatoes and pumpkin cheesecake. Do you see?”

“I guess?” Caroline said. “Is that why my marigolds are gone?”

“But they keep the rabbits away.”

“You don't want to keep this bunny away, do you?” Sean gave Caroline’s hands a squeeze. She tried to keep her composure.

“I appreciate what you're saying, but I can't go through life without orange things,” Caroline said. How could she live without her tangerine LaCroix? What would happen the next time the terror alert level was raised? What if she needed something from Home Depot?

“I don't expect you to,” he said. “I'm already in counseling for it and I've actually come really far. The other day I saw a woman wearing a pair of Ivanka’s shoes and I didn't put my fist through a wall! Please give me another chance.”

Caroline thought for a moment. On one hand, this guy was dealing with some pretty serious issues and it might be better to keep her distance. On the other hand, it felt like this relationship was meant to be, even if it might be a while before they could do romantic orange-tinged things like watching a sunset or cuddling in front of a fire.

“Okay, Sean,” she said. “I'll give you another chance, but you have to promise to keep going to therapy.”

“I will,” he said. “As long as Obamacare stays in place so my insurance continues to cover it.”

That was good enough for Caroline.

Sean Spicer pulled her closer and took her into his arms. His embrace was just like she had imagined: warm and pillowy. Caroline relaxed into him and sighed.

“I'm glad you came back to explain this to me,” she said.

“I'm glad you let me.” Sean kissed the top of her head.

“Just think,” she said. “This all started because you were hiding in my bushes.”

“I wasn't hiding in your bushes,” he said.

Caroline started to protest but Sean put his finger to her lips and held her tighter.

“I wasn't hiding in your bushes,” he repeated. “I was hiding among them.”

Fin
Posted by Jen Presidentress at 5:22 AM