Inspired by the Vladimir Putin and Justin Trudeau fan fiction over at Hottest Heads of State, I decided it was time to give the world what it really needs: Sean Spicer fanfic. I thought it might be a bit outside the scope of the Presidentress blog, but then I figured that Sean Spicer fits squarely in the category of presidential history, so why not?

Since I'm dealing with the Trump administration here, I should probably include some sort of disclaimer, but a lawsuit would also drive a lot of traffic to the site, so I'll just remind everyone that this is fan fiction. (Also, I use the term "fan" loosely.) Check back for new chapters! 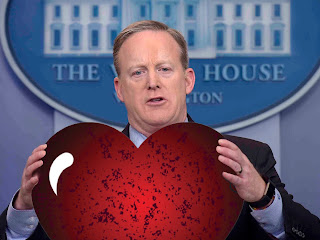 Things are About to Get Spicey


Caroline sighed and took another sip of her pineapple LaCroix. A bead of condensation ran down the can and fell onto her bare thigh, causing her to shiver despite the sweltering heat. She set the can down and adjusted her wide-brimmed hat to block the sun from hitting her copy of The New York Times.

She had just turned the page to continue reading the latest story about the president’s Russian collusion when the sound of the gardener’s hedge trimmers made her lose her concentration. Caroline sighed again. These new gardeners always seemed to arrive at the worst time, when she was trying to sunbathe and relax by the pool—or sunbathe and read by the pool, as it were, since there was nothing relaxing about Russian collusion.

Caroline missed Raphael, her old gardener. He would always come when Caroline was at work or out shopping, and he never interrupted her solitude. Unfortunately Raphael had been detained in an ICE raid in April and had since been deported. Caroline had gone through a few other gardeners before finally settling on the company she had hired a few weeks ago: Garden Alternatives, Inc. The company was okay. The guy they sent seemed to be meticulous and always did a nice job, but Caroline felt like she was never alone anymore.

She did her best to continue reading despite the whirring of the hedge trimmers, but something felt off. She took another sip of her LaCroix, which this time dripped onto the middle of a paragraph, obscuring the name of a Russian oligarch. Caroline folded the newspaper and threw it down in frustration. She glanced over at the gardener just in time to see him turn away from her.

She picked up her phone and tried to catch up on her Facebook feed but the glare from the sun made it impossible.

The hedge trimmers hummed to a halt, but the silence suddenly seemed too great. Caroline got an uneasy feeling again. Without turning her head, she slowly moved her gaze back to the gardener. Sure enough, two beady eyes were peering out at her from between the bushes.

So that was it, she thought. The gardener had been creeping on her. Caroline made a mental note to call Garden Alternatives, Inc. first thing in the morning to request a different worker. She had no interest in serving as eye candy for a laborer, even if he was masterfully trimming her shrubs into the shape of an elephant.

Caroline swung her legs over to the side of the lounge chair and sat up. She grabbed her wrinkled paper and her sweaty can and stood to go inside, away from the stalking gardener.

Ma'am? Caroline inwardly huffed. She was too young to be called ma'am. She turned to him anyway.

“Yes?” she asked, peering over the top of her red sunglasses. The gardener strode over to her.

“I just wanted to see if you'd like any other animal topiaries,” the man said, gesturing toward the elephant.

A large fabric safari hat obscured most of the man’s face, but something about him—his meaty neck, his chinny jaw, his furrowed brow—felt strangely familiar. Caroline didn't understand why, but she suddenly felt calmer and more at ease.

“Oh, the topiary,” she said, unexpectedly flustered. “Yes, I meant to thank you for it. It’s lovely.”

The gardener smiled, but not an ordinary smile. It looked like the smile of a man who hadn't been complimented in months. Caroline thought she saw him wipe away a tear.

The man gave a little chuckle. “Yes, I'm sorry,” he said. “It's just nice to have someone appreciate what I do. Things didn't go too well at my last job, so I'm trying something new.”

Caroline wondered what his last job had been. Pool boy? Butler? Ice cream truck driver? She shuddered to think what could have gone wrong.

“What was your old job?” she asked.

“I was the White House Press Secretary,” the man said, almost as an apology.

Caroline was speechless. Surely this gardener was pulling her leg...her long, tanned leg.  But wait. That neck, those chins, those beady eyes… Could it be?

“It's true,” he said. Slowly the man reached up to remove his hat and all doubt. Caroline’s new gardener was Sean Spicer.


Posted by Jen Presidentress at 7:44 AM