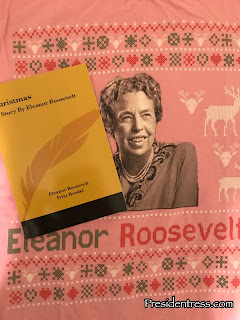 Since I'm too lazy to connect my phone to our wireless speaker, we typically get our Christmas music from a holiday music channel included with our cable lineup. Since it's a TV station and they need some kind of visual, there's a slideshow of Christmas cookies, mulled cider, ornaments, etc. They also flash "Did you know?" facts. (Did you know: Many Japanese people spend their Christmas Eve eating KFC!)

Anyway, we don't typically spend a lot of time actually sitting there watching photos of gingerbread and random factoids, but now and then we'll glance up and see them. That's how, a couple weeks ago, I learned that in 1940, Eleanor Roosevelt wrote a Christmas book for kids. What??? Off to Amazon I went...

Older versions of the book (titled Christmas) range from $30-$165, which was far more than I was willing to pay. Luckily there's a bland reprint for $15.95. Still more than I wanted to spend, but I had a gift card, and we're talking about a Christmas story by Eleanor Roosevelt. I had already purchased my Eleanor Roosevelt ugly Christmas sweater-shirt, so I needed the book to complete my theme for the season.

Thanks to Prime Shipping, my book arrived two days later. I told my family that after dinner, we were going to gather 'round for a Christmas story by Eleanor Roosevelt. My kids groaned, but my 13-year-old said, "Guys, we have to accept that we're all victims of Mom's obsession." True, true. Two of my kids and Mr. Presidentressor cooperated very nicely, and only one child complained through the whole thing.

First, I set the historical stage for them: In 1940, World War II was well underway in Europe, and America was wondering if/when we'd enter the fray. Tensions and concerns were high. Then I proceeded to read the story aloud.

The plot involves a girl named Marta, from an unidentified European nation. (Based on some phrases within the story, I'm assuming Belgium or the Netherlands.) She recalls the previous St. Nicholas Day, when her father was able to briefly come home from the military to enjoy the holiday with his family. Now, however, her father has died, and she and her mother are living in poverty (and under Nazi occupation, although Marta is too young to use those exact terms).

Marta's mother explains that St. Nicholas will not visit them this year, but Marta holds out hope. Sadly, her mom is right: St. Nicholas does not come. But this whole time, Marta has been taking solace in talking to Baby Jesus to help her cope with the loss of her father, and she's convinced that the Christ Child will visit them for Christmas. So when Christmas Eve comes, she lights a candle and steps outside with it to guide the Holy Baby's way.

Suddenly, Marta is aware of a man standing near her, and she senses some darkness in this figure. Again, the book doesn't say it, but he's clearly a Nazi, and he's also depicted as a sort of otherworldly evil force. Tomato, tomahto.

Anyway, this dark figure berates her for believing in Christmas and Jesus. He says her only loyalty should be to "he who dominates the rest of the world through fear and strength." Then he goes inside to admonish Marta's mom for teaching her daughter such foolishness. At this point, the mom is holding a baby, who the man thinks is just a regular baby but is actually (spoiler alert) Jesus!

The mom stands up for herself (figuratively---she doesn't actually stand because she's still holding Jesus), explaining that believing in Jesus provides them with something good and hopeful against the current backdrop of fear. The guy just stands there for a while, and eventually his heart softens a bit, kind of like the Grinch, but instead of providing Roast Beast he offers her a life of comfort, but she'd have to let go of her beliefs.

The mom declines and gives a long response, ending with "You will go out into the night again, the cold night, to die as all must die who are not born again through Him at Christmas time." Then the man does go back out into the night, and that's pretty much it. He hears the evil spirits roaring around him, and looks back at the warm glow from the house, then shrugs and decides he'd rather stick with his power.

So...it would be an understatement to call this a heavy-handed allegory. I get the appeal of pitting good against evil, and what better example than poor, oppressed nice people versus Nazis? And if one of those nice people can tell off a Nazi in the process? Even better. And I'm in favor of people standing up to the government in order to exercise freedom of religion (or freedom from religion, as the case may be). But I have to draw the line at conflating non-believers with Nazis, which is ultimately what this book does.

If it were just a matter of Marta and her mom triumphing by remaining firm in their convictions against the Nazis who want to quash them, that would be one thing. But Eleanor (Why, Eleanor, why???) has to throw in the line about non-believers---not just evil non-believers, but all of them---dying out in the snow. Happy holidays!

It's not just in that exchange where she draws that conclusion. In her foreword, Eleanor says, "The times are so serious that even children should be made to understand that there are vital differences in people's beliefs which lead to differences in behavior." Combined with the ending of the story, it's pretty clear that the message is: Christian = good, non-Christian = bad.

At this point, we should possibly confront the issue of the Jews. Now, it's not fair to expect someone in 1940 to know that by the end of the war, Nazis would have exterminated millions of people, primarily Jewish. But by 1940, Nazi persecution of and brutality toward Jews was well established and was known in America, especially to those involved in the federal government. According to this story, they, as non-believers in Christ, should also go die in the snow.

In a 1932 speech called "What Religion Means to Me," Eleanor said the following:


And yet most of us who are in the forties and fifties today can look back to a childhood where religion and religious instruction were part of our everyday life, but we have come so far away from those days that in writing this article I even feel that I must begin by defining what I mean by religion. To me religion has nothing to do with any specific creed or dogma. It means that belief and that faith in the heart of a man which makes him try to live his life according to the highest standard which he is able to visualize. To those of us who were brought up as Christians that standard is the life of Christ, and it matters very little whether our creed is Catholic or Protestant.

To those of us who happen to have been born and brought up under other skies or in other creeds, the object to be attained goes by some other name, but in all cases the thing which counts is the striving of the human soul to achieve spiritually the best that it is capable of and to care unselfishly not only for personal good but for the good of all those who toil with them upon the earth.

Now that's fair. (Some people will argue about the wording, but the message is clear: Good people strive for good, regardless of what specifics might motivate them.) Would it have been so difficult to incorporate that into this story?

Am I looking at this through a modern lens? Yes, I am. Is that fair? I don't know. On one hand, we have the advantage of almost 80 years of retrospection. On the other hand, this book was written by the First Lady of the United States. Even in the 1940s, not every American kid was Christian, and it seems kind of crummy for the president's wife to ostracize them because of it, even back then.

And, okay, I'm willing to concede that this is a Christmas story, and therefore maybe it should be expected that there would be a religious component, but again, can't that be portrayed in a way that doesn't also shun others, especially when you're the First Lady of the United States?

It might also be a trivial point, but the story is just kind of sloppy, too. One of the golden rules of children's books is that the protagonist needs to solve his/her own problem: Someone else can't just swoop in and make everything better. In this story, Baby Jesus suddenly appears out of nowhere. (One could argue that Marta summoned him, and therefore she's responsible, but...) Talk about a deus ex machina.

So, bottom line: I get what Eleanor was going for here, but I wound up really disappointed, as did my little atheist/agnostic children. Needless to say, this book won't become part of our holiday tradition.

Posted by Jen Presidentress at 11:26 AM